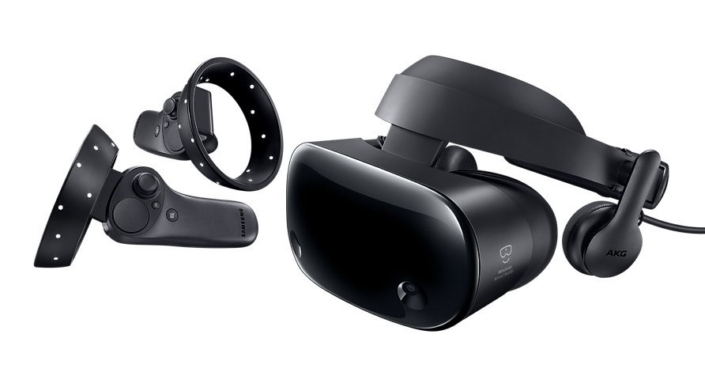 Fusing rich visuals with crisp acoustics, the Samsung HMD Odyssey offers an experience that draws you in deeper to the world of mixed reality, a blend of virtual reality and augmented reality.

HMD Odyssey is a head-mounted display, developed to explore the world of Windows Mixed Reality. The headset was designed in partnership with Microsoft, creating a device that seeks to reimagine the realms of virtual reality through its high-resolution dual displays, AKG headphones, built-in microphone and intuitive installation.

Read on for our hands-on, first impressions look at the new mixed reality headset.

Out of the Box, Into the Game

Set-up is truly intuitive. As well as being ready to play right out of the box, the Samsung HMD Odyssey’s ergonomic design also allowed me to adjust the device to my satisfaction in moments.

The HMD Odyssey does not require any external motion sensors, thanks to its Inside-Out Position Tracking, which frees you from the confines of a single environment and allows you to plug and play, anywhere. Just connect the device to a compatible PC* wherever you are and get ready to explore a virtual world. 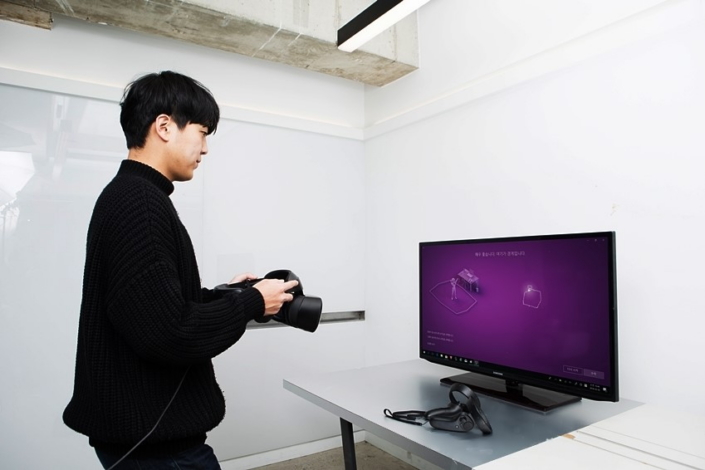 To set up the HMD Odyssey, I first connected my device to a compatible PC. Next, I was instructed to point the headset towards my PC monitor, and draw the shape of the room, while keeping the headset facing the monitor. This allowed the device to map the physical space around me, and any obstacles, such as furniture and walls, in the physical world became “walls” in the virtual world, to prevent me from bumping into anything.

Everyone’s body is different, and the HMD Odyssey is designed for an optimal fit for everybody. For example, the hard type headband, with its cushioned Forehead Pad, is easily adjustable and ensures an even weight balance for hours of comfortable play. The headband can be tightened to sit snugly on the head, even while wearing glasses, and blocks out any surrounding light. A nice addition is the physical volume buttons, which mean that you can control sound levels with just one press, rather than scrolling through in-game controls. What is more, the Inter Pupillary Distance (IPD) Control Wheel, positioned under the goggles, adjusts the distance between the left and right dual displays, allowing you to find the perfect fit for your eyes.

At the heart of the full visual immersion is superior picture quality. The world may have been virtual, but the sharp, crystal clear images that surrounded me made it feel completely real. 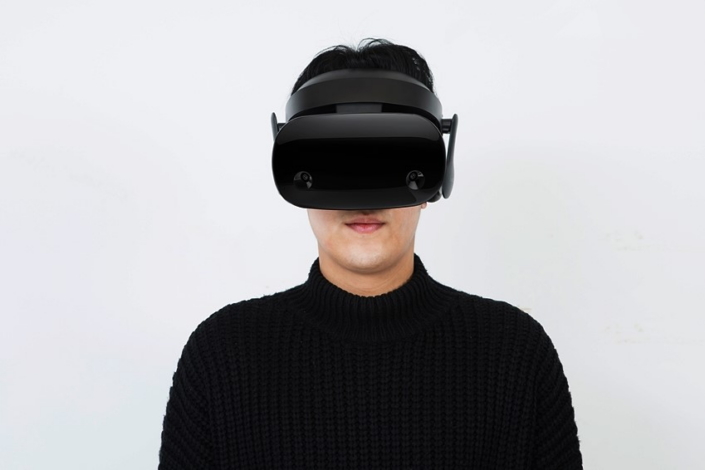 At the same time as delivering more vibrant colors, deeper blacks and sharper contrast, the HMD Odyssey also renders motions more smoothly. The larger screen size and 1440×1600 high-resolution picture quality per each display on the left and right, provide a fluid and lifelike virtual experience, with fast focusing and a clear and stable experience overall.

The HMD Odyssey’s 110-degree Field of View alters the boundaries of the mixed reality world. The scope is greater than that of other devices and closer to the average person’s 120-degree real world field of view, allowing you to explore and move through worlds without viewing distortion, for heightened realism.

Incorporating the sense of sound through its built-in headphones and mic, the HMD Odyssey adds another crucial dimension to the mixed reality experience. 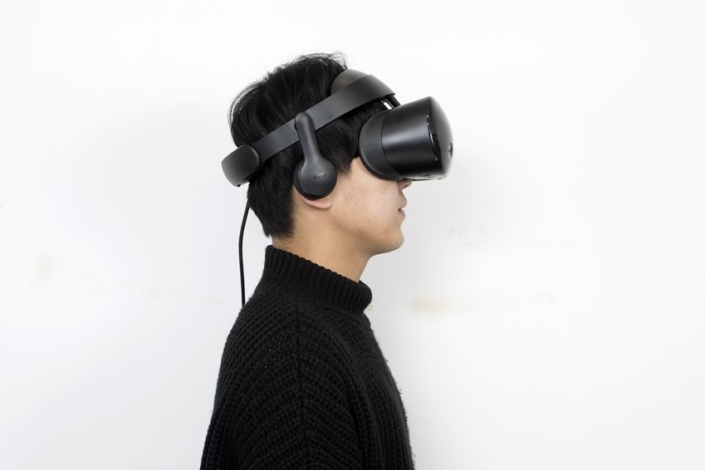 I was pulled further into the world by the device’s 360° Spatial Sound. By simulating 3D sound using direction, distance and environment, 360° Spatial Sound allowed me to pinpoint the source of noise in the virtual realm. The whole effect encourages you to use your hearing as you would in the real world, listening through built-in AKG headsets which produce clear, world-class acoustic and bass.

Whether working together as a team to clear missions and battle enemies, or simply chatting to other players, it is well known that building bonds a key part of the gamer’s experience. I found these bonds are even tighter with the HMD Odyssey’s fitted array mic, which allows players to communicate with each other mid-game, without ever having to remove the headset.

To help me navigate Windows Mixed Reality, the HMD Odyssey came equipped with two 6 Degrees of Freedom (6DOF) motion controllers that tracked movements inside the mixed reality world. A tutorial guided me through using these tools when I first connected my device to a PC, in which I learnt how to maneuver through the world, performing actions like “teleport” to rapidly shift from one place to another.

I soon discovered that 6DOF goes beyond the three axes of regular VR controllers: I had the freedom to move not only straight – forward and back, up and down, left and right – but also in the rounded and rolling motions: yaw, pitch and roll. The HMD Odyssey headset also supports 6DOF, so that your head as well as your arms can control motion in the game. 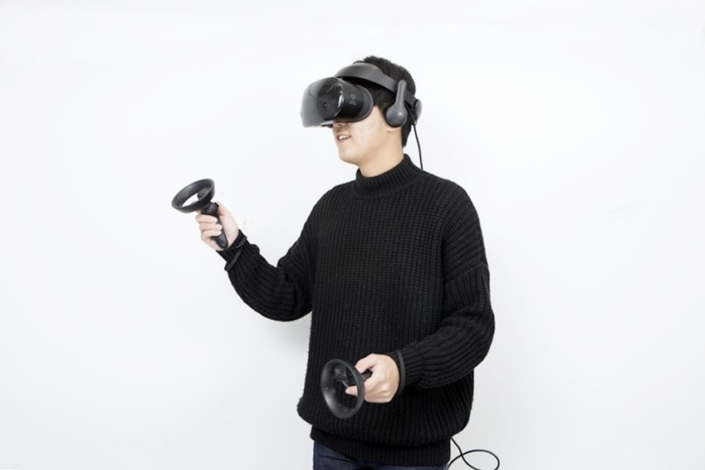 The first place you will visit in your Windows Mixed Reality journey, and whenever you use the headset, is the Mixed Reality Portal. The portal appears in the virtual world as Cliff House, a spacious villa with an ocean view, that I could explore and customize to access all my Windows apps. 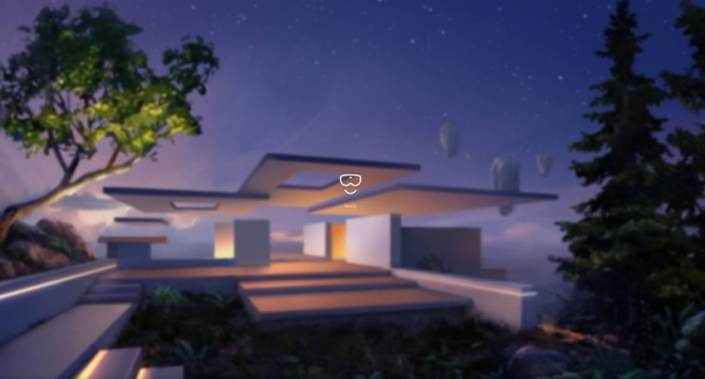 A wide range of apps and games can be downloaded from the Microsoft store, ready to make you feel totally immersed. There is also support for Steam VR, which has over 2,000 VR games in its catalogue**. 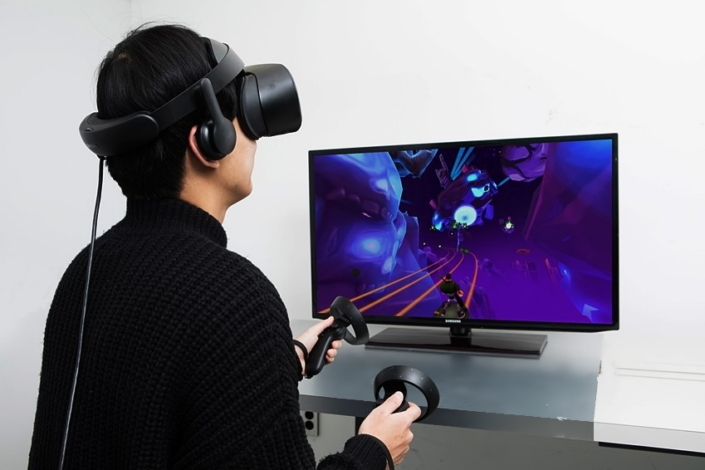 My first game was the music-themed Rock&Rails, an exhilarating thrill-ride. I struggled not to flinch or recoil as I flew through the sky, fighting off enemies by shooting from my guitar. Rock&Rails is available from the Microsoft store with purchase of the Samsung HMD Odyssey headset, so you can get into the game as soon as you unbox your device***.

With a set-up that is effortless, striking 1440×1600 resolution dual AMOLED displays, built-in AKG headphones and support for a wide range of games and media. Samsung’s HMD Odyssey provides all that you need to experience the exciting new realm of mixed reality.

**Title availability is subject to change.

***Bundle availability may change with location and date.