How Low Can You Go? Samsung X-Ray Cuts Radiation in Half

At RSNA 2017, the annual event from the Radiological Society of North America, attendees were intrigued by the new digital x-ray from Samsung. The reason was because it offered a solution that was able to provide the same image quality as other x-rays but with 50% less radiation. And now it has the approval in the US to offer a new way to carry out the procedure for patients.

Bright sunflowers were part of the ‘dose less, care more’ campaign at the show. The flowers were a natural choice for the initiative because of their ability to take up high concentrations of radioactive elements and toxins into their tissues. They therefore purify soils of contaminants. This illustration signified the ability of Samsung’s new x-ray machine to emit lower levels of radiation.

Reducing the amount of radiation is always the goal for radiologists. Although we’re exposed to low levels of radiation in everyday life from many sources – even the air we breathe – no one wants to expose patients to more radiation than is necessary. The Samsung GC85A premium digital x-ray is a welcome addition to hospitals then, as it emits half as much radiation – which is a huge breakthrough.

The S-Vue engine in the GC85A™ recently received approval from the US Food and Drug Administration (FDA). The FDA is the US regulator of medical treatments and its approval is the gateway for Samsung’s new x-ray to be rolled out across the country.

Making the GC85A so unique is the spatially adaptive multi-scale processing and advanced de-noising technology that enable high quality images even at half the dose. The technique was tested in a study by Professor Semin Chong from Chung-Ang University. He carried out what’s known in the industry as a phantom test whereby a model based on the human body is used to test the effects of x-ray technology without having to use to a real human. The image processing did indeed produce an equivalent image evaluation score when the dosage was halved.

In practice, patients who receive a chest x-ray from the GC85A are subjected to 8 microsieverts (μSv) of radiation. That’s the same radiation from eating 80 bananas. It’s also as low as the average effective dose absorbed into the body during a three-hour flight from Chicago to New York. In other words, the radiation levels of the Samsung GC85A are low and protect patients from higher levels of radiation that other machines emit.

“We are pleased with the approval of the US FDA,” said Insuk Song, Vice President of Health & Medical Equipment Business at Samsung Electronics. “We plan to expand dose reduction x-rays for other parts of the body such as the abdomen and limbs and infants in the future. We will also continue our efforts to reduce radiation.” 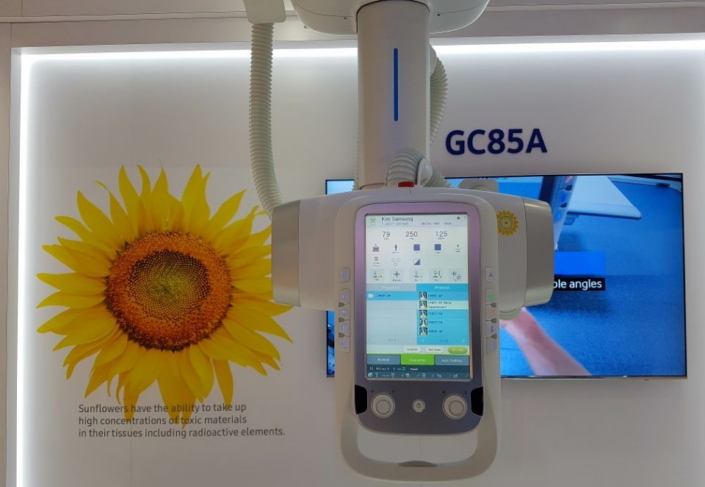