[Video] Stop the Search: How Technology Could Help Track the Lost Animals of Kazakhstan 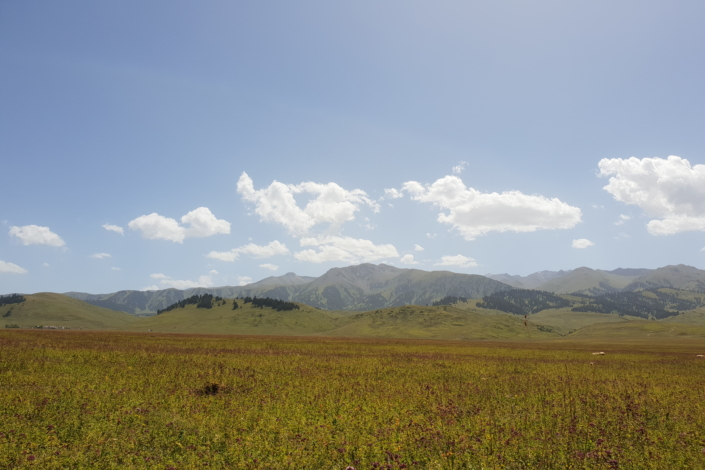 Mynjylyk, Kazakhstan is a beautifully vast area but for the people keeping animals there, it can be a difficult terrain in which to do their job

“What should we do? Yeldar says his horses are gone….”

It’s the worst thing you can hear at a time like this. It’s particularly concerning for two reasons. Firstly, we wanted the horses to be in shot for the video we’re filming. Secondly, and more importantly, missing horses is a distressing situation for the protagonist of our video, 19-year-old Yeldar. We’re in a field in rural Kazakhstan and the panic on Yeldar’s face is clear to see. The horses that grazed during the night did not return. He’s worried because anything could have happened to them.

The unfortunate fact is that this isn’t an isolated incident. In the mountainous region of Mynjylyk, Kazakhstan where local nomads rely on their livestock to make a living, keeping track of the animals is more or less the equivalent of keeping track of funds in your bank account. Gathering livestock from grasslands, counting their numbers, maintaining their value as commodities and managing these procedures require tremendous physical energy. And in order to sell them, the nomads have to know where their animals are at all times. It’s a task that’s easier said than done.

Just like many Kazakhs, the people of Mynjylyk mainly work in stock-farming. They raise horses and lambs, which are staple foods locally. Because the animals are grazed in open grasslands, you see herds of horses and sheep eating grass everywhere

Many livestock are lost in the process of grazing due to theft, going missing or wolf attack. Their loss is one serious issue to nomads. Also, as their job is very difficult, you can no longer work in livestock farming once you pass a certain age, but today, young people who would like to work in this occupation are decreasing. The biggest reason for such a trend is its inefficiency. With other problems combined, livestock farming, what was once the representative industry of Kazakhstan, is now losing its legacy.

A Helping Hand from Samsung

The reason we’re here in Kazakhstan with our video cameras is to film the tech-led solution in action. Samsung Electronics is partnering with the locals to help them keep track of their animals and it could completely change the way they live and work.

When the ATA team were brought in for reinforcement, they got the opportunity to visit the site for the first time. They were able to get a real understanding of the challenge and work closely with the Lives’Talk team to develop the solution

People in the region already knew that technology had to provide a solution to lost livestock. A group of technology enthusiasts from both Kazakhstan and Uzbekistan created a solution that used GPS on wearable devices to help the locals find their animals more easily. They designed a service that involves attaching an identification device to the animals and allowing the owners to see the location and other related information about their animals using communication technology. When this idea is implemented, nomads no longer have to search for their lost animals in kilometers of grassland. This not only saves manpower and time but also decreases potential economic loss that they would suffer from.

To help prevent lost animals, the Lives’Talk team develop a GPS device that sends real time location data to the owner’s smartphone so they always know where their animals are

It was a great idea in principle but in reality, it was difficult to develop and implement. Especially because the team members on the project weren’t professionals and were working with a hard-pressed budget. As innovative as it was, the project, called Lives’Talk, faced failure. But with a last roll of the dice, the team entered the Samsung Tomorrow Solutions contest and won the grand prize.

The Samsung Tomorrow Solutions social contribution contest began in 2013 with the aim of developing ideas for finding inconvenient issues in society and resolving them. The contest covers four areas of education, healthcare, environment safety and local community. Everyone can participate without limits on age or affiliation. For the Lives’Talk team, the win gave them a new lease of life and prize money that they could plough right back into the project. Suddenly, their idea was back on the table.

Initially, the transmitters were too big for the animals to comfortably wear. Working in collaboration, Samsung and Lives’Talk worked to slim down the device and also increase the battery capacity

But it wasn’t all plain sailing from there. The GPS device was too big for the animals to be comfortable with. Water and dust resistance weren’t yet conquered and battery life was also far too short. Even if all these problems were solved, the mountainous topography of the Kazakh grasslands meant that signal often wasn’t as strong as they’d like it to be.

Even with the second wind granted by the Samsung Tomorrow Solutions win, it was still a tall order for the Lives’Talk team to further develop their idea. They still had the passion and belief in their concept, but they just didn’t have the adequate know-how to get things off the ground. 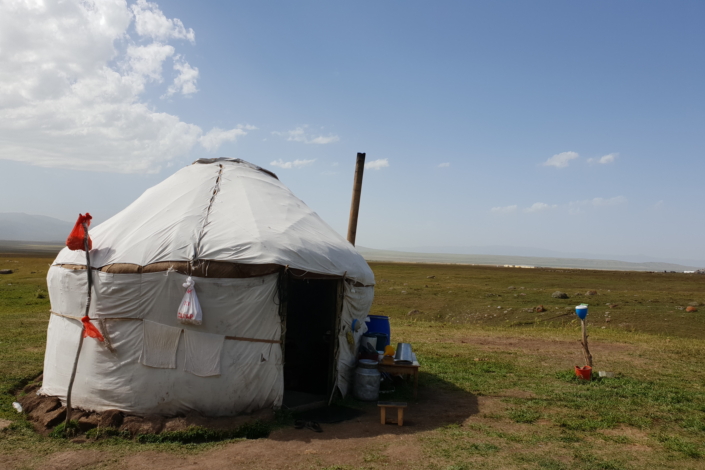 An outside view of a yurt, the common traditional house in the region of Mynjylyk

In the end, the Lives’Talk team asked for help from Samsung Electronics. Still impressed with the idea and with a desire to help develop a solution to the problem, Samsung sent a team called ATA from the Samsung C-Lab, the company’s internal venture training center. The mission for team ATA was reducing the size of the attachment device and increasing the battery life. Also, they had to establish a communication environment for the device to be used smoothly. It was a moment where both Lives’Talk and ATA teams came together under the shared objective of bringing convenience to the Kazakh nomads.

Another day, another missing animal.

The horses that Yeldar and we were worried about came back to their home half a day later. Later, we learned that horses have a homing instinct that helps them come back home after being missing for a while. But this time, it’s lambs that have gone AWOL.

When his lambs went out on the grasslands for the night and didn’t return, Yeldar was back in panic mode. “We must return the lambs back to their pen before they stray away alone!” There was only one thing we could do. We had to find the lambs. The lambs were nowhere to be seen until the morning of second day.

“We found the lambs! Yeldar found them and he is now coming back!” One of the team members shouted over a smartphone, and we hurrahed. But it was not over. If we were to make up for all the lost time, we had to be quick and efficient to film all the scenes we needed.

The star of our video is 19-year-old herdsman Yeldar. For him, missing animals are a common and frustrating occurrence

We had to battle a number of problems in attempting to shoot the video. It served as a reminder of the difficulties that the nomads face as part of their everyday work. This in turn reinforced the need for the solution that would help people such as Yeldar and stop him using so much of his time looking for animals in such vast grasslands.

One thing we noticed about the project to develop the GPS solution is that it is a work of close collaboration. This wasn’t just an opportunity for Samsung to parachute in experts. It was an opportunity to learn from and integrate with the locals to better understand the brief and provide the relevant solution. The video team also got to experience first-hand the hospitality of the locals. Some of the local residents invited us round for dinner. They even gave us Kazakh names.

During our visit, the locals were very accommodating. We were served a traditional Kazakh lamb dish by this welcoming family

The camera director who was the ‘ice breaker’ and became friendly with the locals faster than anyone else received the name ‘Guanci’ (happiness). I, who led the filming process received the name ‘Shokhan’ (a creative person). Despite our language differences, we had a wonderful experience interacting with them. In doing so, we understood why Samsung found it such a worthwhile project to be involved with. And as Samsung Electronics continues to work with the local people in Kazakhstan, there’s a shared optimism that the technology will create new opportunities for those who rely on their livestock and want better ways to carry out their occupation.

Below is the final cut of the video. We hope this helps more people understand the situation these mobile shepherds are in as well as Samsung Electronics’ efforts to help better people’s lives around the world with technology.

* Original article by Jungho Yoon, translated from Korean to English and edited by the Samsung Newsroom team