Samsung Unveils Winners of the “Best of 2018” Galaxy Apps Awards 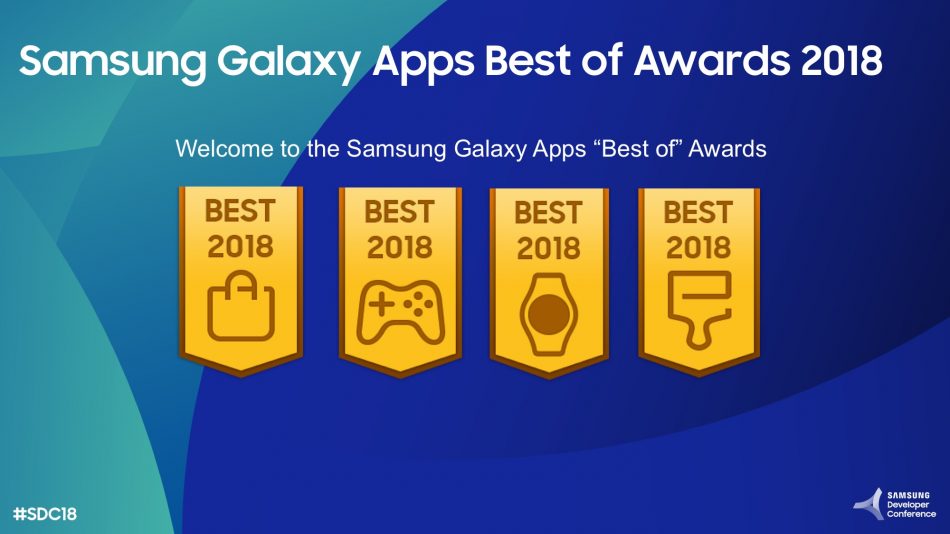 SAN FRANCISCO, Calif. – November 7, 2018– Samsung Electronics America, Inc., today announced the first-ever “Best of 2018” Galaxy Apps Awards, recognizing the creators behind the most innovative and popular apps on the Galaxy Apps store. On stage at the 2018 Samsung Developer Conference, winners across five categories will receive their awards during a special award ceremony. With the “Best of 2018” Awards, Samsung recognizes top independent creators who embody the spirit and embrace the potential of the Galaxy ecosystem of connected devices and services.

“At the heart of the Galaxy Apps store are the designers and entrepreneurs who pour their energy and enthusiasm into creating amazing experiences for Samsung consumers – they inspire us,” said Chris Jo, General Manager and Head of Applications Management and Business Operations, Samsung Electronics America. “We’re thrilled to have the ‘Best of 2018’ award winners on stage at the Samsung Developer Conference. It gives everyone an opportunity to learn from their success.”

All winners receivean exclusive “Best of 2018” badge and premium app merchandising in the Galaxy Apps U.S. and Canada stores. The award-winning apps and content will also be featured across Samsung Developer Program’s social and digital marketing channels.

With Booking.com for Samsung, users can plan their next adventure and access great travel deals with an app specially designed for Galaxy devices.

This crossover mobile role-playing game lets fans duke it out as their favorite characters from the Disney and Pixar universe, from Alice in Wonderland to Zootopia—and much more.

Kema Studio created the Wrist Camera app to allow users to seamlessly operate their Galaxy phone cameras from their watches—an example of how independent creators build on many connected devices within the Galaxy ecosystem. “The Samsung team did a really great job supporting the marketing of this app on Galaxy ecosystem,” said Dimas, the developer of Kema Studio.

The Bergen team, a seven-member collective of designers and developers based in Montevideo, Uruguay, is behind some of the most popular watch faces on the Galaxy Apps store. “I dream every day about designing watch faces and now I have found a place where with a lot of passion and dedication, I can make it come true,” said Nicolas Castro, CEO & Designer at Bergen.

Guangxu Zhu is a prolific Theme designer whose signature style has been featured in the Samsung Themes Magazine on multiple occasions. “I am honored to be a partner of Samsung and look forward to more opportunities like this in the future,” said Zhu.

SDC brings together thousands of developers and creators to explore today’s tech and visualize what’s possible in the future. The two-day conference will feature exciting keynote announcements, technical sessions and valuable networking time. Plus, Samsung product teams and technology partners will showcase the latest tech advances and tools.