LONDON, UK – 6th July, 2021 – Samsung Electronics Co., Ltd today announced Project Dignity as the first UK winner of its Solve for Tomorrow competition, a global initiative that challenges young people to use technology in creative ways to help improve their community and positively impact their surroundings. Since 2010, more than 1.69 million students from over 20 countries around the world have participated in Samsung Solve for Tomorrow, and Alec now joins a number of global winners who are turning their ideas into action through the creative application of technology.

The winning idea from Alec Conway looks to create street-lockers that can act as an infrastructure for the homeless community, giving them secure storage spaces for their possessions, but more importantly they will double as PO boxes that provide the user with a permanent address. The provision of a fixed address is a key part of preventing the homeless from being permanently excluded from society, as it allows them to open a bank account, access essential services and employment opportunities. These digital lockers will also act as a hub for the community to find local information and resources as well as a donation point for the general public. 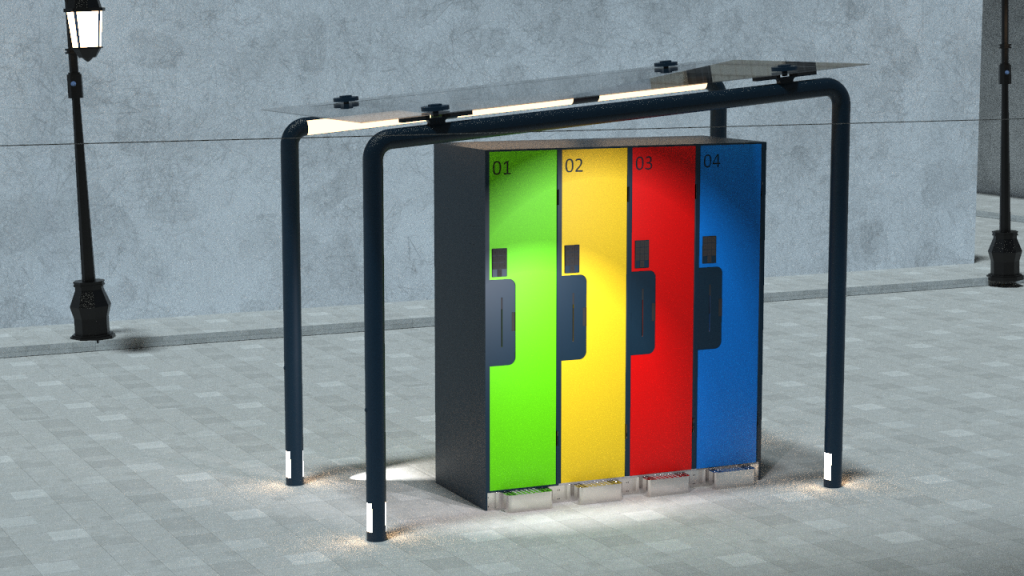 Alec’s idea began three years ago when he was interrailing around Europe. He saw homeless people carrying all their possessions and he began to question why they didn’t have any place to store them. It deeply affected him, and when he returned to the UK he began exploring the issue as part of his final year project at University. It was here that he became aware of the vicious cycle that homelessness creates and how difficult it can be to end this awful situation without a registered address.

Alec’s Solve for Tomorrow journey for Project Dignity began at the end of last year when he, along with 585 other teams of young UK innovators, submitted a technology-focused idea to help tackle one of four key challenges faced by society; Education, Social Isolation, Diversity & Inclusion, and Sustainability. After initially being shortlisted, Alec has taken part in six months of judging and mentor workshops to help him develop and evolve his concept. Alec’s win, over the four other finalist teams in the running, has made his dream of making Project Dignity a reality. 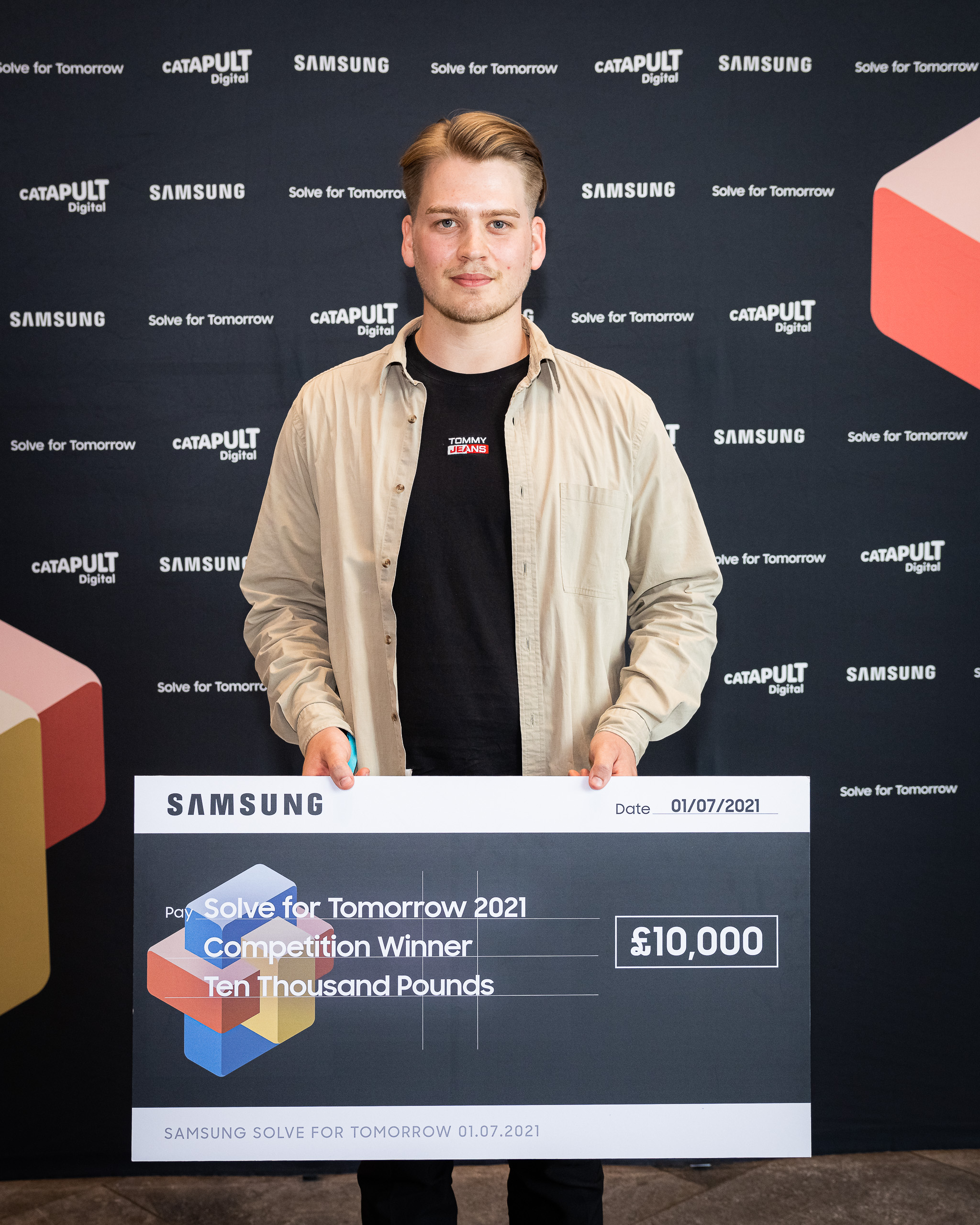 Alec commented: “I honestly can’t believe that I’ve won. When I first became aware of how difficult it is to break the cycle of homelessness three years ago, my street-locker idea was just a pipedream. It’s been inspiring to have had the chance to work with experts who believed in my idea and I can’t wait to take it on to the next level. In the next six months we’ll hopefully see the first set of lockers being installed – I’d like them to be in London because that’s where the issue is most prevalent in the UK.”

Since being shortlisted, Alec has worked with his Samsung mentor, Joanna Jaoudie, to develop both his business proposition and its design, and he will now begin crowdfunding for the next iteration of the lockers after receiving a lot of interest from people that would like to invest in his innovation. Alec has also had interest from the Salvation Army regarding potentially setting them up in Bristol. After winning the competition, Alec will be working with Samsung and Digital Catapult alongside a startup partner to build a prototype for the locker over the next six months.

“Our goal for Solve for Tomorrow has always been to give the next generation the opportunity to develop a technology-based idea that will help tackle societal issues. Alec has, from the beginning, shown himself to be a true innovator, understanding the issues facing our society, and creating a deeply insightful approach to finding a technology-driven solution. Samsung is incredibly excited to see how he progresses through the next six months, and where his journey will take him.”

Previous winners of Solve for Tomorrow include Hope of Detroit Academy (Detroit, Michigan) who created an app called the Green Warrior to track locations with excessive amounts of garbage and report them to local organizations that help lead clean-up efforts,  the GEMS World Academy (Dubai) who devised a multi-purpose vest with built-in cooling pads to help manual workers to help maintain body temperature in sweltering conditions, and Team A.I.R. (Kuala Lumpur, Malaysia) who developed a sensor able to monitor and transfer data on pollution levels in the water supply using an Internet of Things (IOT) application that measures contamination in real-time. Alec now joins these inspiring young innovators who are using technology to help improve the world around them.

Digital and Culture Minister Caroline Dinenage said: “Congratulations to Alec for being crowned the Solve for Tomorrow winner and well done to everyone who took part and developed innovative ways to create positive social change. We want to give young people the best chance to succeed and through our digital T Levels, digital apprenticeships and AI courses and scholarships, we are helping them develop the digital skills they need for the future.”

Geraldina Iraheta, Chief Commercial Officer at Digital Catapult added: “Delivering Solve for Tomorrow with Samsung for the first time in the UK has been a rewarding experience for the whole team at Digital Catapult. We firmly believe that technology has a crucial role to play in solving society’s biggest challenges and creating long term sustainable solutions. We’ve been inspired at every step by the young people involved and the ideas they’ve presented, and the judges have had an impossible task to pick a winner!”

For young people interested in looking at how technology can help solve some of society’s biggest issues, Solve for Tomorrow is currently hosting a series of alternative learning experiences that are suited to any learning style, regardless of experience or qualifications. There are a series of live-streamed Future Talks with the UK’s top experts, as well as On Demand online courses for people that want to learn at their own pace. If this sparks a tech idea that could solve a real-world issue, young people from around the UK can enter the Competition when it reopens again later in the year for the chance to make it a reality like previous winners from around the globe.

The ‘Solve for Tomorrow’ programme follows Samsung’s ‘Not a School’ initiative. ‘Not a School’ offers an educational experience for young people, to build skills and knowledge outside of the traditional school curriculum, founded in contemporary issues that affect the global community. Through the programme, Samsung hopes to empower students by working with speakers to not only inspire but also provide additional insights to the subjects addressed on the course. Of the 25 finalists in ‘Solve for Tomorrow’, five are alumni from ‘Not a School’ – a clear sign that students are looking to take their learnings one step further via Samsung’s additional educational offering.