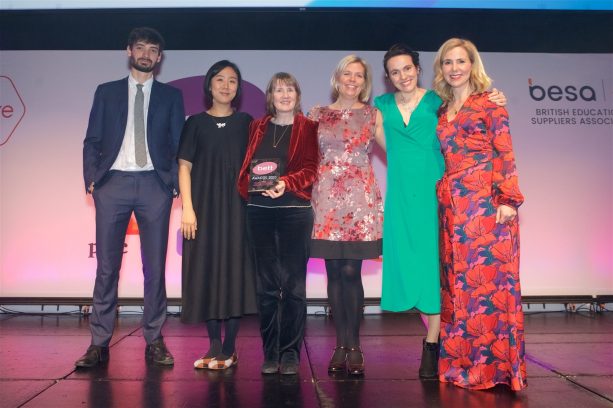 London, UK – 28th January 2020 – A collaboration between the Royal Shakespeare Company (RSC), Welcombe Hills School (Stratford-upon-Avon), and Samsung Electronics UK, has scooped a top prize at this year’s BETT awards. Winning the ‘Collaboration With A School’ category, the accolade was awarded for a two-day Romeo and Juliet school takeover on the 10th and 11th June 2019 delivered by the school and RSC Education using Samsung technology.

The BETT awards recognise excellence and innovation in the use of technology in the classroom and the winners were announced at the prestigious ceremony at the Troxy in London (Wednesday 22nd January 2020). The judges were particularly impressed by the impact that the project had on the whole school, with over 180 students at Welcombe Hills participating in the two-day event. The pupils are aged between 3 and 19 years and have a wide range of additional needs including complex Moderate Learning Difficulties (MLD), Severe Learning Difficulties (SLD) and Autistic Spectrum Disorder (ASD). Welcombe Hills has a long history of working with the RSC and is the Lead Special School in the RSC’s Associate Schools Programme

Samsung Gear VR and Gear 360 cameras and the use of multi-technologies transported the children directly into the world of Romeo and Juliet. Students designed costumes on the interactive Samsung Flips, created their own soundscapes on Samsung Galaxy tablets and participated in a stage combat masterclass. Different areas of the school were transformed into Friar Lawrence’s apothecary, a bustling marketplace and the tomb where the main characters meet their tragic end. As well as extracts from the text, a series of touch switches, props and interactive projections throughout the school allowed the students to physically explore the play’s language, themes and setting through site, smell, taste, touch and sound.

Other activities included converting the climbing frame into Juliet’s balcony; designing promotional short videos or trailers for their own versions of Romeo and Juliet; pizza making; mask-making; and creating invitations for Capulet’s ball.

Jo Bradley, Assistant Headteacher, Welcombe Hills School, said, “Shakespeare’s plays are timeless and the extraordinary storylines and powerful characters naturally appeal to our young people. The school was buzzing with excitement. The pupils were challenged and inspired. Teachers found new, creative approaches which could be used across the whole of the curriculum and we demonstrated how we could use Shakespeare as a catalyst to progress in all other curriculum areas.”

Jessie Park, Head of CSR for Samsung Electronics UK, said, “We are honoured to be recognised for our work with the RSC and Welcombe Hills School at the prestigious BETT Awards. It was rewarding and humbling to see our technology open up opportunities for all of the students to engage in the activities and we’re grateful for everyone’s passion in making this programme possible.”