• 68% of people say that not emptying the pockets of clothing items before putting them in the washing machine is a major cause of irritation
• The UK’s #1 (83%) kitchen bug bear is revealed as leaving old, out of date food in the fridge
• Marginally less annoying at 81% is making a mess in the kitchen, and not clearing it up
• #3 (72%) is leaving the fridge door open so all the food inside warms to room temperature

4 October 2017 – Samsung Home Appliances surveyed 2,000 men and women in UK aged 18+ to find out their personal bug bears and frustrations at home and in the kitchen.  The survey celebrates the launch of Samsung’s “The Domestics” campaign; a new six part comedy series starring comedians Katherine Ryan and Joel Dommett. 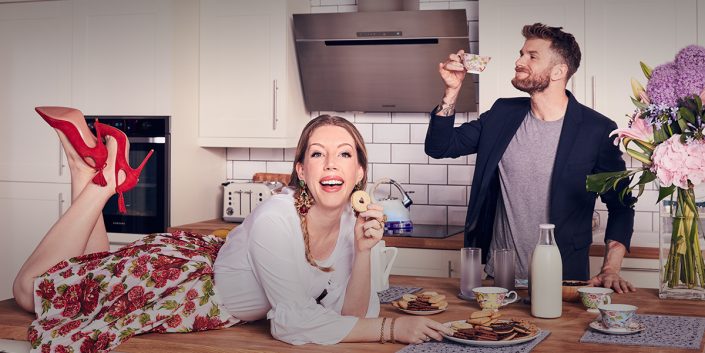 Samsung found that the other bad kitchen habits that irk the UK population most are: not emptying the pockets of clothing items before putting them in the washing machine (68%); wiping crumbs and food remnants off surfaces and onto the floor (66%) and leaving dirty dishes in or next to the sink rather than putting them in the dishwasher (61%).   Interestingly, domestic annoyances are a great leveller as the survey didn’t show up any big variations here across gender, age or UK location.

The nation’s favourite kitchen hack was a simple time-saver: to make double the quantities when cooking so you can use what’s needed on the day, and then can freeze the rest to use later.

Samsung asked what the one kitchen item you can’t live without is.  Here the fridge came out top with 41% of the vote, followed by the washing machine (21%), the kettle and oven tied at 16%.  The washing machine rated more highly with women (30%) than with men (11%), and the kettle was the biggest hit amongst the older 65+ age group – it must be all those cups of tea.

Samsung then asked the nation’s opinion on what’s the best way to make the perfect cup of tea?  They overwhelmingly agreed (89%) that you need to boil the kettle for the full amount of time.  They’re more evenly split on how long you should allow the tea bag to brew for: 49% saying leave it to brew for 3-5 minutes, 46% saying to leave it brewing for just 1-2 minutes.    On when to add the milk, 81% say after the hot water.  And the perfect colour for the perfect cup of tea?  41% like their tea best when its caramel-coloured, 37% prefer it stronger/darker, with only a splash of milk. 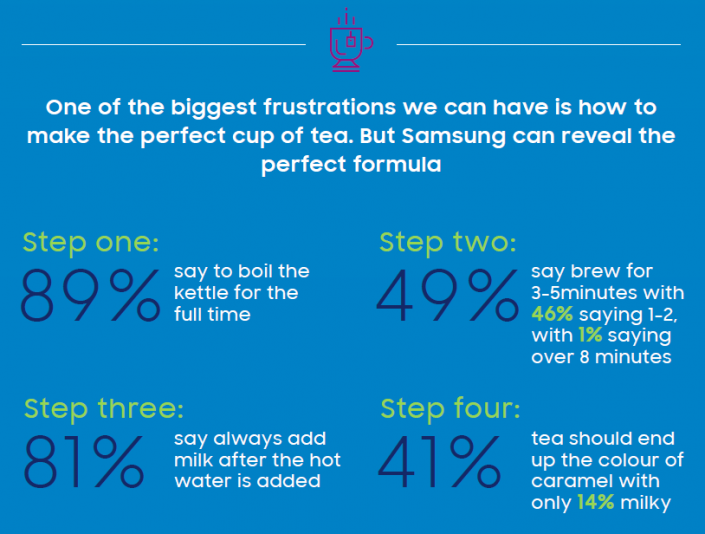 Samsung Home Appliances’ “The Domestics” is a six part comedy series that reveals the little observations in modern day life that can cause tensions and frustrations. Starring Katherine Ryan and Joel Dommett, Samsung worked closely with the comedy duo to develop their humorous takes on everyday domestic moments to entertain viewers, whilst showcasing Samsung’s appliances and the innovations that can help to resolve these tensions.

Sally Whitson, Head of Marketing for Domestic Appliances at Samsung Electronics UK and Ireland says, “Domestic tensions really are the Great British bug bear. Our research proves how passionate we are about our little idiosyncrasies, but also how divisive they can be. This, combined with our own experiences, inspired us to create The Domestics, and bring to life those everyday frustrations we all experience, adding a bit of humour in along the way. We also wanted to show how Samsung’s appliances are designed to help with these everyday tasks so you can have more time to do what you love… and hopefully rowing less with who you love!”

Watch each episode at Samsung.com and YouTube.com/SamsungUK

Episode 1: Tea: How to make the perfect cup of tea

Episode 4: Dishwasher: Joel and Katherine debate the appropriate way to stack a dishwasher

Episode 5: Wash-Dry: Joel is preparing for date and needs his lucky shirt washed

*research conducted by Bilendi on 21 September 2017 with a representative sample of 2,000 UK population aged 18+