Yungblud leads a collision of three different art forms as he is joined by the London Community Gospel Choir and graphic designer Aries Moross in 3Fold gig, celebrating the launch of the new Samsung Galaxy Z Fold3 and Z Flip3 foldable devices 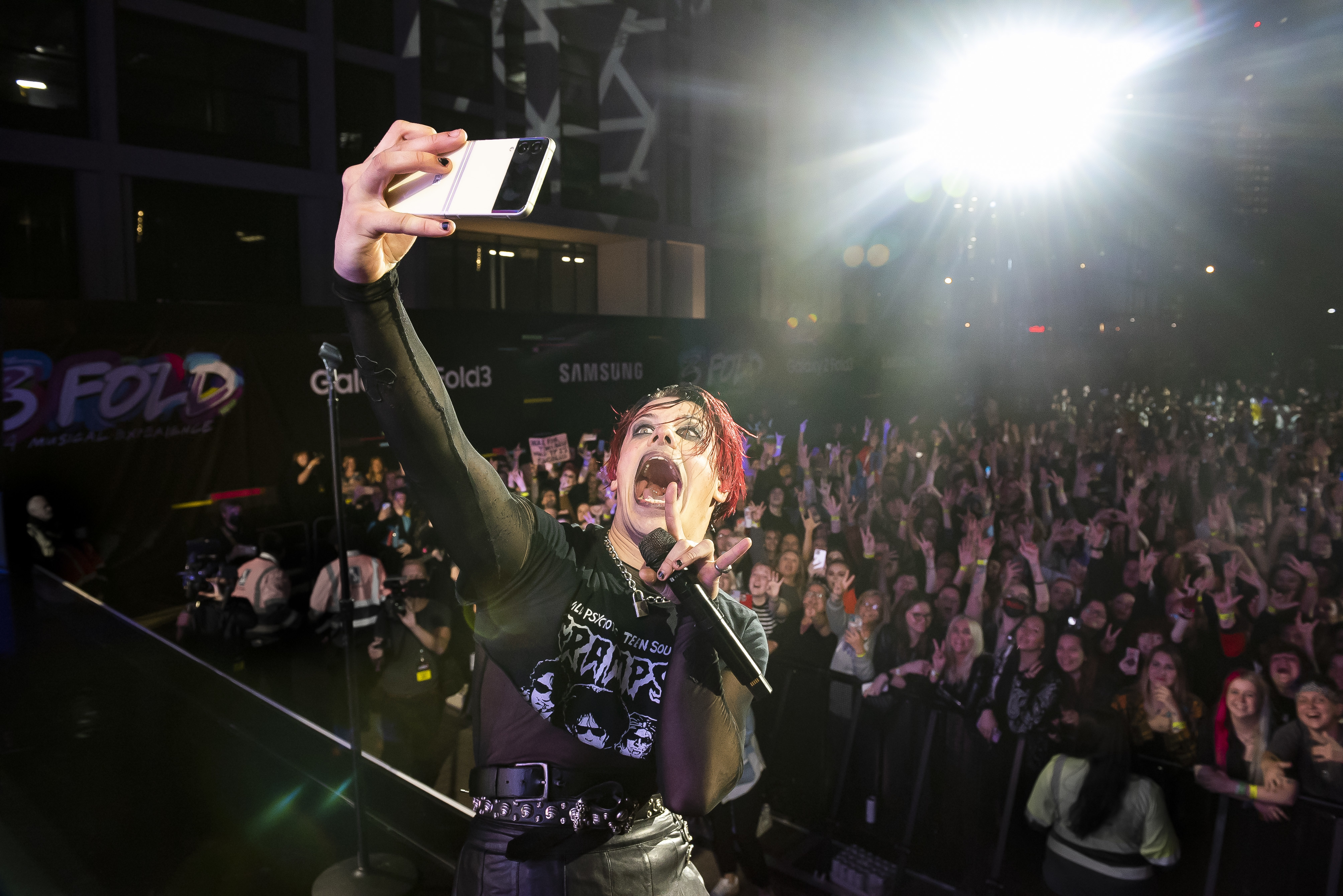 The Brit Award nominee, whose album ‘Weird!’ topped the UK album charts, was joined on stage for the encore by the London Community Gospel Choir and the acclaimed digital artist Aries Moross for a special 3Fold collaboration on the single ‘Mars’.

The free 3Fold gig was staged by Samsung UK on the eve of the launch of its new folding smartphones, the Samsung Galaxy Z Fold3 and Galaxy Z Flip3, with fans watching on as the gig unfolded.

The concept for the concert was directly inspired by the new Samsung foldable smartphones, with the encore of three different art forms replicating the Multi Window capabilities of Samsung Galaxy Z Fold3, which allows three different apps to be open at the same time, and run simultaneously on the 7.6” Main Screen.

The special performance even featured an incredible 6 metre rotating stage outside Samsung KX in King’s Cross, designed to reflect the look of the Samsung Galaxy Z Fold3 phone and its unique folding form factor.

The 24-year-old star, known for his post-emo sound and provocative stage presence, played to 1,000 lucky fans at the intimate gig.

Yungblud, who through his music and his award-winning podcast has become a spokesperson for his generation , is one of the most exciting artists to emerge out of the UK in years. The star who professes to being 15 different people at any one time performed a seven-song set, featuring ‘Parents’, album title track ‘Weird!’ and brand-new single ‘Fleabag’.

“I’ve loved every minute of performing for my fans over the last few weeks man. After such a long time out from playing live, to be part of this Samsung experience that brings three different amazing acts together has been wild. Collaborating with Aries Moross, a personal hero of mine, who’s pushing the boundaries of sexuality and gender, and the London Community Gospel Choir on a song that means so much to me was something I’ll remember for a really long time.”

“Yungblud is an astounding and creative performer and the perfect person to illustrate the collision of three worlds and the unfolding of possibilities for the launch of our latest devices.

“We’re so pleased to be able to launch the new Samsung Galaxy Z Fold3 and Z Flip3 to the public and it’s been great to partner with Yungblud, the London Community Gospel Choir and Aries Moross to celebrate this moment with an unforgettable performance”.

The new Samsung Galaxy Z Fold3 and Z Flip3 phones were revealed for pre-order on Wednesday 11th August and are available on Samsung.com and all major retailers from August 27th. For added convenience, fans can also take advantage of the Click & Collect service, exclusive to Samsung KX, plus be rewarded for their purchases with KXtras.

Both devices offer a completely different foldable experience for customers, built with the premium craftsmanship and flagship innovations Samsung users have come to love and expect. The third generation of these category-defining devices incorporates key improvements that Samsung foldable users have asked for—making them more durable with more optimised foldable experiences than ever before. From iconic design to immersive entertainment, Samsung Galaxy Z Flip3 and Z Fold3 give users unique new ways to work, watch, and play.

Samsung is committed to giving more consumers access to the unique foldable experience, launching the new Samsung Galaxy Z devices at our best value yet.