Ask any female scientist, and she’ll tell you she made it to where she is today thanks in part to a mentor. Whether it was an encouraging parent telling her girls are good at math or a science teacher nurturing her interests, someone along the way empowered her to believe she was capable of more.

That’s exactly what Samsung is hoping to do by working with a variety of nonprofit organizations to further programs geared towards girls of all ages. From elementary education to high school science challenges, Samsung is leveraging its expertise in technology—and an eager group of working female engineers—to give young women the tools and mentorship they need to develop an interest in careers in science, technology, engineering and math (STEM).

Research shows that it’s crucial to reach children at an early age—5th grade and younger—to foster an interest in STEM careers. It’s even more important for girls; while women made up 49% of the workforce in 2009, only 24% of STEM jobs were held by females according to a report by the U.S. Department of Commerce Economics and Statistics Administration.

Samsung hoped to start to close that gender gap through a pilot program at Miller Street Elementary School in Newark, NJ called emPOWER Tomorrow, in partnership with Discovery Education. Samsung donated Chromebooks to the school and engineers engaged 4th and 5th grade girls in fun projects like designing and programming computer games, so they could see what a job in science and engineering might really look like. Since the pilot, the program runs in several cities across the country, including Seattle, New York City, Miami and Chicago.

“It’s so important, the work that Samsung is doing with emPOWER Tomorrow because they’re really engaging kids at the right time,” said Elizabeth Lipscomb, national director of Discovery Education. “They are empowering them with experiences where they can visualize themselves in STEM careers.” 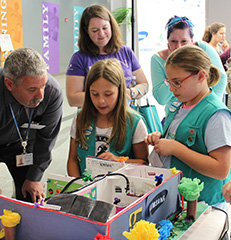 Central Texas got a chance to learn more about environmental engineering and work together to plan for a more sustainable future with Samsung’s Girl Scout Tech Challenge. Troops from 47 counties worked to come up with creative solutions for water conservation at Samsung’s Austin semiconductor facility. During the six-week challenge, the girls also partnered with a Samsung employee, who taught them all about the facility, the semiconductor process, and advised them on building models for their projects.

At the end of the competition, over 100 girls, ages 8 to 17, from all over Central Texas gathered to show off their ideas to a panel of judges. Excited and energized by the experience,the girls left with an idea of how STEM could enable them to make their world a better place.

This weekend, the program will be kicking off its fourth annual event, where Girl Scouts will be put to the test to work with their peers to solve four engineering problems. Participants will not know the topics until they are presented to them at camp. This fun-filled weekend at Camp Tex Lake will be filled with teamwork, problem solving and traditional camp activities.

Samsung Austin Semiconductor also partners with Girlstart, an Austin-based organization striving to teach girls STEM subjects, to further support Central Texas’ local STEM education efforts. Samsung has contributed $75,000 to date and has connected the program with its Women in Technology at Samsung (WITS) group, providing volunteer support for kids during their “Back to School STEM Saturday” event.

Members of WITS interacted with young girls to empower them to pursue STEM in their future. Samantha Bernal, an intern at Samsung Austin Semiconductor, was pleased to develop connections with the kids. “I was able to teach young students about augmented and virtual reality and demonstrate it through NASA’s new apps,” said Bernal, “The kids and parents were able to explore MARS through a VR set and 3D spacecraft.”

Girlstart said it’s important to show girls the careers that can coincide with all these creations. “We teach them about the science behind these activities,” said Itzel Gutierrez of Girlstart. “So they get to see that there is actually science or engineering in all of this stuff.”

Every project at the Techbridge afterschool program has an element of play—and brings scientific concepts into the real world. From learning the fundamentals of chemical engineering by creating the formula for their own lip balm to “hacking” shirts by programming and sowing in LED lights with the help of computer engineers from Samsung Research America, the program shows girls that STEM subjects touch their lives in all sorts of ways.

Techbridge serves more than 30 schools in Oakland, San Lorenzo, San Jose, Seattle and Washington D.C., through fun and educational hands-on projects, and partners with Samsung engineers to help mentor students. “Samsung role models help them make a connection between what they’re doing with a hands-on activity and what they could be doing in the real world of science and engineering careers,” says Rachel Fryke, the program coordinator at Techbridge.

By the end of most Techbridge programs, participants have something they made themselves to take home and reminded them of what they can accomplish—and the promise of a career in STEM.

To find out more about Samsung’s partnerships to encourage excitement about STEM education and careers for girls of all ages, be sure to visit our Education page.