Jeju, an island off the southern coast of South Korea, is a place known for its natural beauty. The Olle Trail, which circles the entire island, is adorned with piles of black volcanic stone, stretches of sparkling white sands and a view of the ocean always within sight.

But the beauty of Jeju doesn’t stop at its coastline. In commemoration of the United Nations’ World Ocean Day this June 8, a day set to appreciate and advocate for our globe’s oceans, Samsung Global Newsroom is taking a dive into the pristine waters surrounding Jeju along with the help of Dong-sik Kim, an acclaimed underwater documentary director, and the Galaxy S21 Ultra. This year’s World Ocean Day theme is “The Ocean: Life and Livelihoods”, and so Kim headed underwater to capture the multifarious marine life that lies beneath the waves of Jeju. 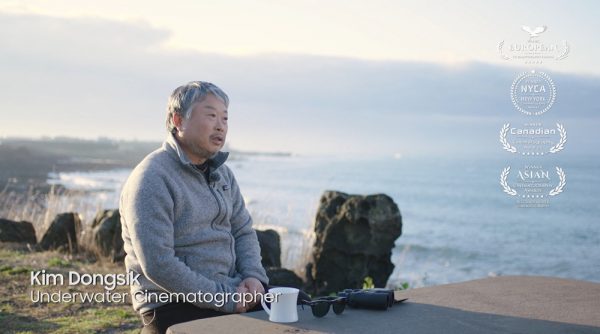 Dong-sik Kim is a professional underwater documentary director who has been bringing the diverse marine life of the world’s oceans to viewers for the past 39 years in order to help people answer the question, what is life really like beneath the waves?

Kim has devoted his life to making ocean documentaries that capture both the mystery and the beauty of the nature that thrives beneath the surface of our oceans in order to raise awareness of preserving our oceans. Kim is currently working on his latest documentary focusing on Jeju’s diverse marine life, including the islands famous ‘hanyeo’ (female divers) and its dolphins, all the while highlighting the co-existence of human and marine life.

Given the nature of the subjects he is capturing, reducing the size of his shooting ear is important to Kim. “Instead of weighty gear, a slim and compact smartphone used to capture marine life can help close the distance with my subjects, reduce undue stress on marine life and help protect the environment,” noted Kim. “Shooting a documentary using the Galaxy S21 Ultra is definitely a new challenge for me!”

How to Film Underwater with the Galaxy S21 Ultra 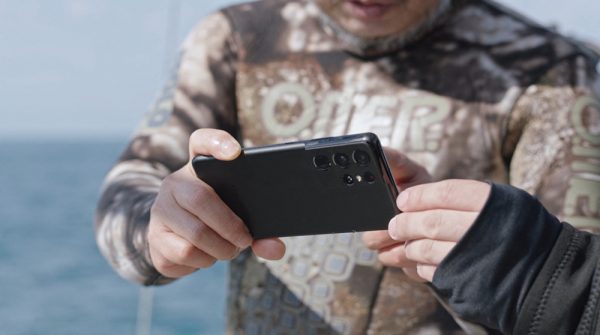 The Galaxy S21 Ultra is an IP68-rated smartphone with outstanding dust and water resistant functionality for use in everyday life. When submerged underwater, including shallow depths, a separate waterproof cover is required in order to most effectively harness the S21 Ultra’s camera while keeping the device safe from water exposure at great depths. 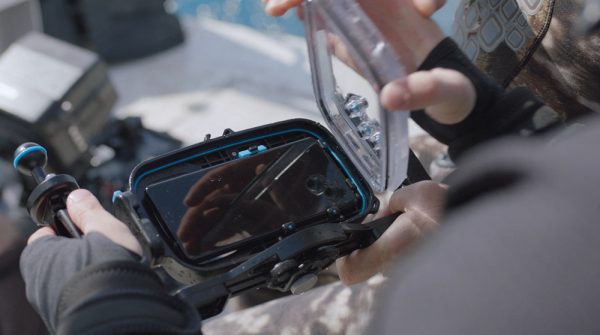 Once you’ve fitted your Galaxy S21 Ultra with its extra layer of protection, the ‘record’ and ‘stop recording’ functions become the only settings available for use, meaning that you will need to arrange your camera settings before commencing shooting underwater. For this shoot, Kim set his camera to wide-angled mode in order to properly capture those more active marine creatures like dolphins. Kim also opted for 8K resolution at standard-angled mode in order to take brilliant up-close shots of coral.

Fine-tuning your lighting levels is crucial to getting the best videos with your smartphone. If you are shooting using just natural lighting, you may end up with different results depending on what time of day it is. For underwater photography, early morning and late afternoon are considered the best times of day to shoot, and if low-light situations occur or you encounter ocean sediment, getting closer to the subject can help with the shot.

As many as 100 Indo-Pacific bottlenose dolphins are estimated to live off of Jeju Island, living in groups that are generally around 5 to 15 in size but that can number up to 70. For these dolphins, enjoying acrobatic feats in the blue waters or harnessing a stray piece of seaweed as a toy is the best way to have fun.

Take a look at the powerful yet graceful movements of Jeju’s dolphins below, captured on the Galaxy S21 Ultra.

The water temperature off of Jeju is around 1-2℃ higher than other mainland coastal regions, and with its clear water allowing sunlight to penetrate thoroughly, Jeju’s waters make the ideal habitat for a whole range of creatures to live harmoniously, including some tropical species.

Underneath the waters of Jeju lies a colorful and truly beautiful hidden world of life. Take a look at some of these fascinating creatures and their unique underwater lives in the shots below.

Here, a Jeju Balloonfish goes about its way unperturbed. Unlike other pufferfish, the Jeju Balloonfish is not poisonous – but it is almost completely covered in spikes, with the exception of its fins and tail.

In the above, a camera-shy octopus tries to hide between the rocks. Thanks to its excellent camouflage and mimicry capabilities, this creature is well-known as being the chameleon of the sea.

Found at a depth of 50m beneath the surface of the waves, the wide-eyed Scorpion Fish is found at a variety of rocky coastal areas around Korea, including the seas off of Jeju.

A Luna Lionfish shows off its dynamic fins and bold stripes. Known for its awe-inspiring patterns, this lionfish immediately captures attention with its imposing posture.

In Korean, the Spotted-Tail Morwong is known as ‘ahopdonggari’, or ‘9 pieces’, in reference to the nine vertical stripes that cover its body.

These Cocktail Wrasse inhabit rocky areas underwater covered with seaweed – the fish will wedge itself between a piece of rock or seaweed in order to get a good night’s sleep. The male of this species has a black-purple body coloring, while the female has a red-brown coloring.

On the underwater cliff faces of Jeju’s sea sit breathtakingly beautiful corals, a sight that takes the aquatic landscape to the next level thanks to their vibrant color palettes. Over 160 species of corals can be found in the waters around Korea, and of the 126 found in Jeju, 90 of them are native just to the island.

The colorful colony that emerges when a coral reef forms almost resembles the birds-eye-view of a tropical rainforest found on land; take a look at some of these stunning underwater vistas, captured with the Galaxy S21 Ultra.

These delicate red soft coral colonies are known as the cherry blossoms of the sea, and are one of the most common types of soft-type corals found in the waters off of Jeju. They can be spotted with a range of red and yellow colorings, including light yellow, reddish yellow, orange and even pink.

These plant-like corals may not have flashy coloring, but the array of shapes they come in and the way they sway gently with the tides is certainly eye-catching. They might seem frail, but be careful – they contain poison that can cause burns to human skin.

Another common soft coral that can be spotted in the Jeju seas is the giant sea anemone, which come together to form lumpy colonies.

These broccoli-like members of the Dendronephthya castanea species of coral come together to build a colony that resembles the springtime blossoming of flowers, complete with stems.

The flower sea fan is one of the most well-known fan-shaped corals. While they may appear thin and flexible, the sea fan’s protruding stems are surprisingly strong.

The Euplexaura crassa coral boasts the most vivid yellow color among all the corals found in Korea – while its rounded edges make it seem soft, it is in fact very resilient to breaking.

Ready to dive in and discover more about the astonishing marine life found beneath the waters of Jeju Island? Take a look at Kim’s video below, captured on the Galaxy S21 Ultra, to see more.