Carrying the Load for Those Who Cannot: #SamsungSalutes Veterans 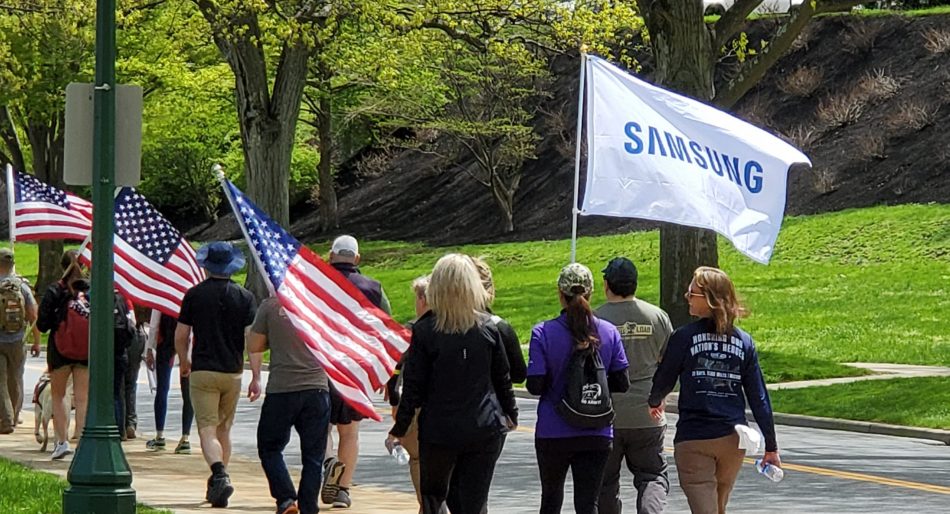 One hundred Samsung Electronics America employees from South Carolina to San Jose have laced up their sneakers and joined the national Carry the Load relay, a weeks-long walk to raise funds for dozens of organizations that support veterans, first responders and their families.

Culminating in a Memorial weekend march in Dallas, TX, Carry the Load 2019 brings together thousands of Americans in a shared commitment to remember, honor and support fallen heroes in our communities and their families. Relay journeys follow three separate routes, stretching from West Point, NY to Washington DC and West to Dallas, from Seattle South to Dallas and from Minneapolis to Dallas, with teams passing symbolic batons to each other along the way.

“Memorial Day should not just be defined by the opening of the pool, but as a way to honor veterans and keep their stories alive,” said John Hendrick, chief veterans’ advocate of the Samsung Veterans Community at Samsung Electronics America, who served in the US Army from 1973 to 1976. “Remembering those who sacrificed so much can be a way to unite us,” he said.

Carry the Load partners with non-profit organizations to provide a continuum of care for military veterans, law enforcement, firefighters, first responders and their families. The Carry the Load 2018 relay raised more than $2.5 million in 2018. Samsung was among the top corporate participants last year and is on track to achieve the same in 2019, Hendrick said.

“It means a lot to me to work at a company with this level of commitment to veterans,” Hendrick added.

Scroll down to learn why Samsung employees took part in the Carry the Load national relay, and for whom they walked and remembered.

Samsung’s Carry the Load West Point team kicked off its leg of the national relay walk on April 29th, 2019 at the famed military academy in upstate New York.

A Carry the Load West Point team member shoulders a military backpack during his leg of the national relay walk. 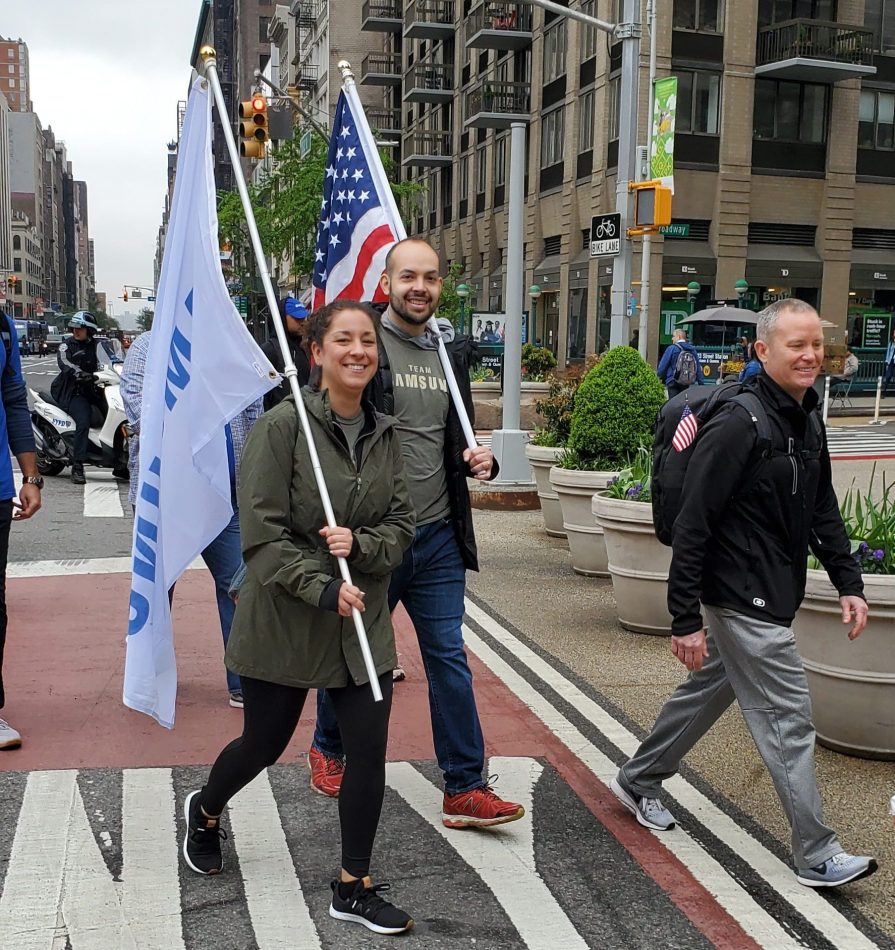 At the start of their leg of the relay walk: Samsung Carry the Load New York City team members Tracy Calabrese, left, Chris Rivera, center, and Christopher Kemp, NYC team lead, who walked for his son and father. “My son is a disabled veteran, and I have seen the various charitable organizations in action,” said Kemp, who works in Samsung Care’s B2B strategy and business development. “In my small way, I’m trying to pay it forward.” 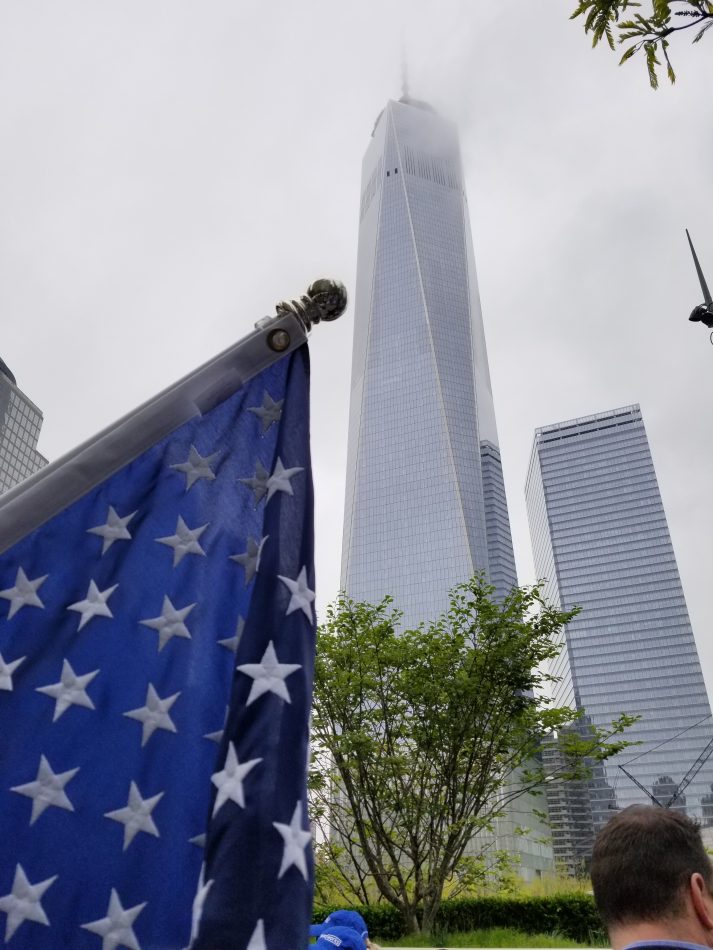 “It’s overwhelming when you get to the Freedom Tower,” said Christopher Kemp, Samsung Carry the Load New York City team lead, of the location where the New York portion of the national relay concluded. 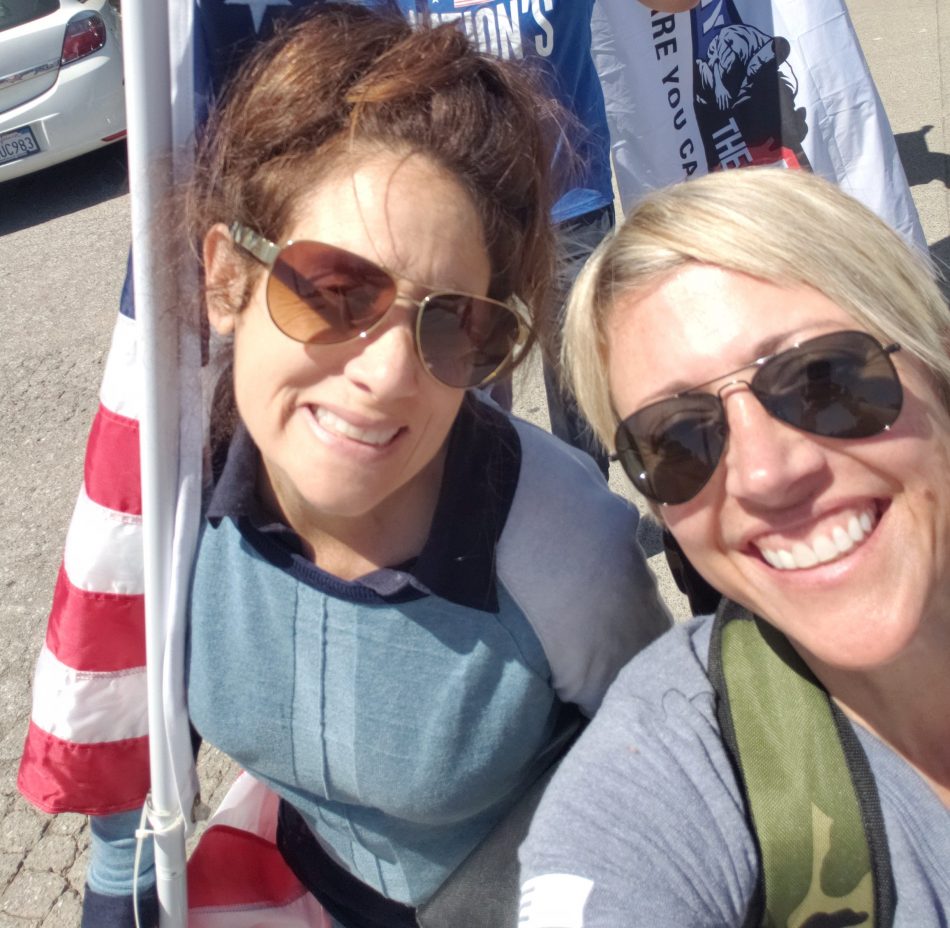 “I walked for all military members and first responders who have sacrificed so much for me to live the life I have,” said Belmaggio. “There have been too many lost through missions that were required to protect our country and for that reason, I walked for all of them.” 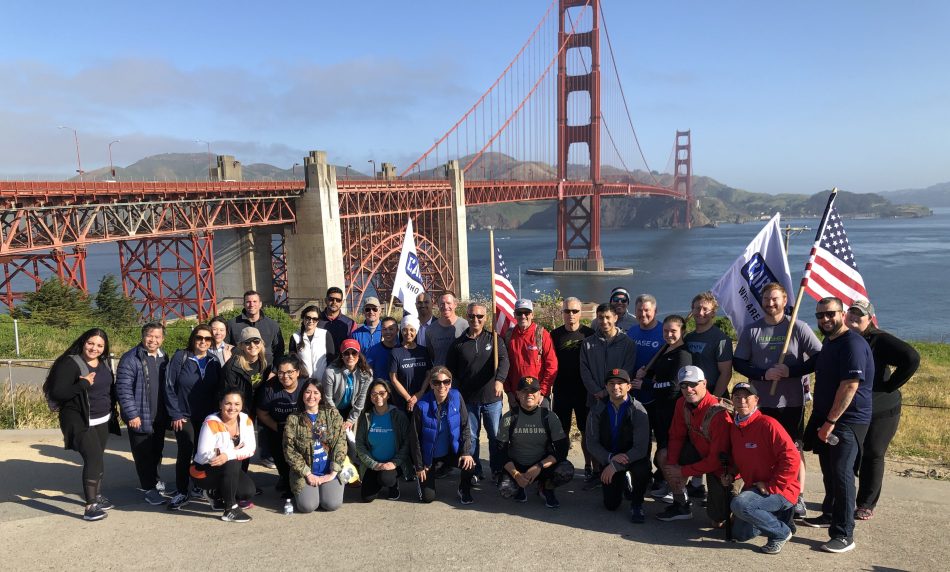 “I was walking for my Father, who served 29 years in the U.S. Navy, as well as other members in my family who have served for the U.S.,” said Jose, a content and services product marketing specialist for Samsung Electronics America. “I wanted to be a part of it to connect with other veterans, families of veterans and veteran supporters.” 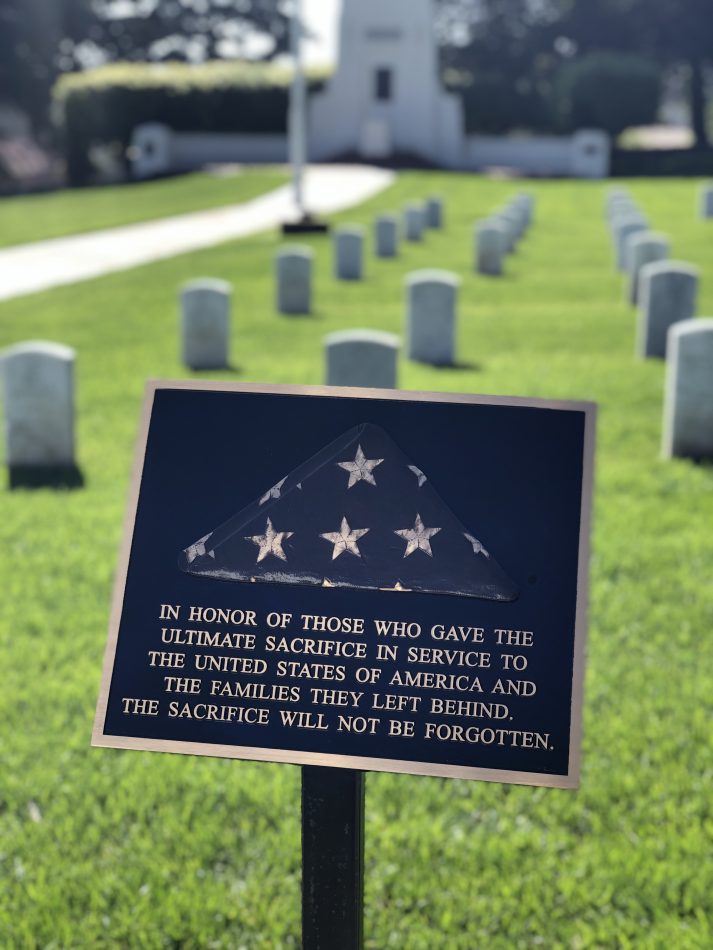 Carry the Load participants in the San Francisco leg of the national relay unveiled a plaque at San Francisco National Cemetary to honor veterans who gave the ultimate sacrifice. 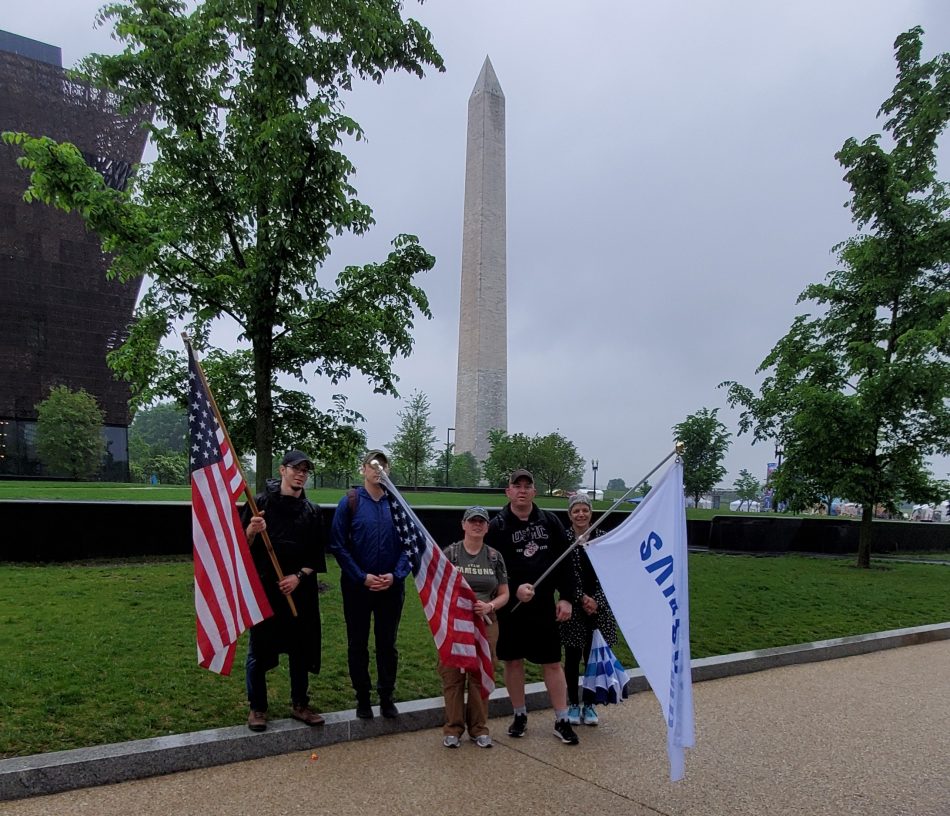 On May 5, 2019 Samsung Electronics America employees in Washington D.C. pause on their national relay leg in front of the Washington Monument. 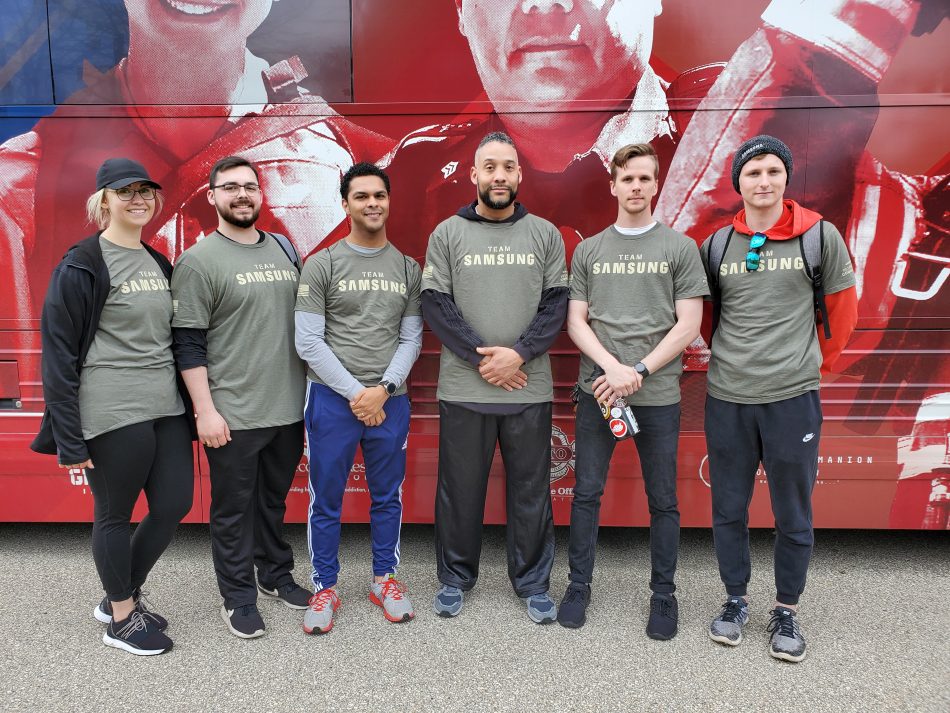 On May 6, 2019, the Samsung Electronics America Field Execution team from Milwaukee came together for their leg of the national relay.

“At the end of the walk we had some time to reflect on not only the great cause we are supporting, but the interactions that we encountered along the way. Cars honked, people clapped and some stopped to speak to us about Memorial May and what it truly means to them,” said Milwaukee team lead David Kogut. “We’re proud that we were able to help veterans’ families.” Pictured from left to right: Brooke Schoenherr, Anthony Casazza, Anthony Mundy, Meshach Belle, Zachary Fugate, David Kogut. 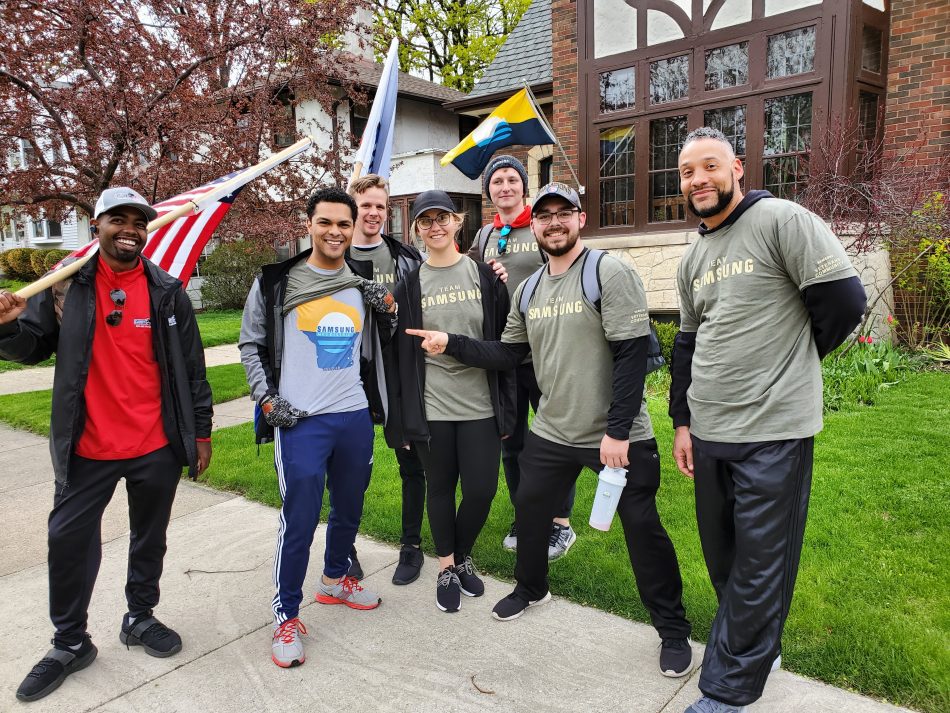 Samsung Carry the Load Chicago team lead Mark Buratczuk prepares to start the Chicago leg of the national relay walk on May 7, 2019. “I was walking for my father, who served in Vietnam as a combat medic, and my brother, who is a Nevada State Trooper,” said Buratczuk, a technical sales manager for Samsung Electronics America.

The Samsung Chicago Carry the Load team walked with other corporate employee participants during their relay leg, pictured here in front of Wrigley Field, home to the Cubs baseball franchise. “There are so many freedoms represented in that one picture, and it was a great reminder of why we pay tribute to those who have sacrificed to secure the freedoms we enjoy,” Buratczuk said.

“We walked for two of my high school classmates who lost their lives in combat, along with my two uncles who also served,” said Samsung Carry the Load Toledo, Ohio Team Lead Andrew Wilson, a field service manager for Samsung Electronics America, pictured with wife Ashlie Wilson on their leg of the national relay walk on May 11, 2019.  “I saw it as an opportunity to support our troops and first responders: people who sacrifice every day for our safety.”

Samsung Carry the Load Columbia, SC team lead Steven Hamilton and wife Dawn Hamilton prepare to walk their leg in the national relay on May 11, 2019. “We walked in honor of my father, George Paul Hamilton, who served in the U.S. Army in the 1950s and ‘60s,” said Steven, a senior strategic project manager with Samsung’s mobility innovations. The Hamiltons said they walked with active duty service members who each carried weighted backpacks in honor of veteran suicide prevention. 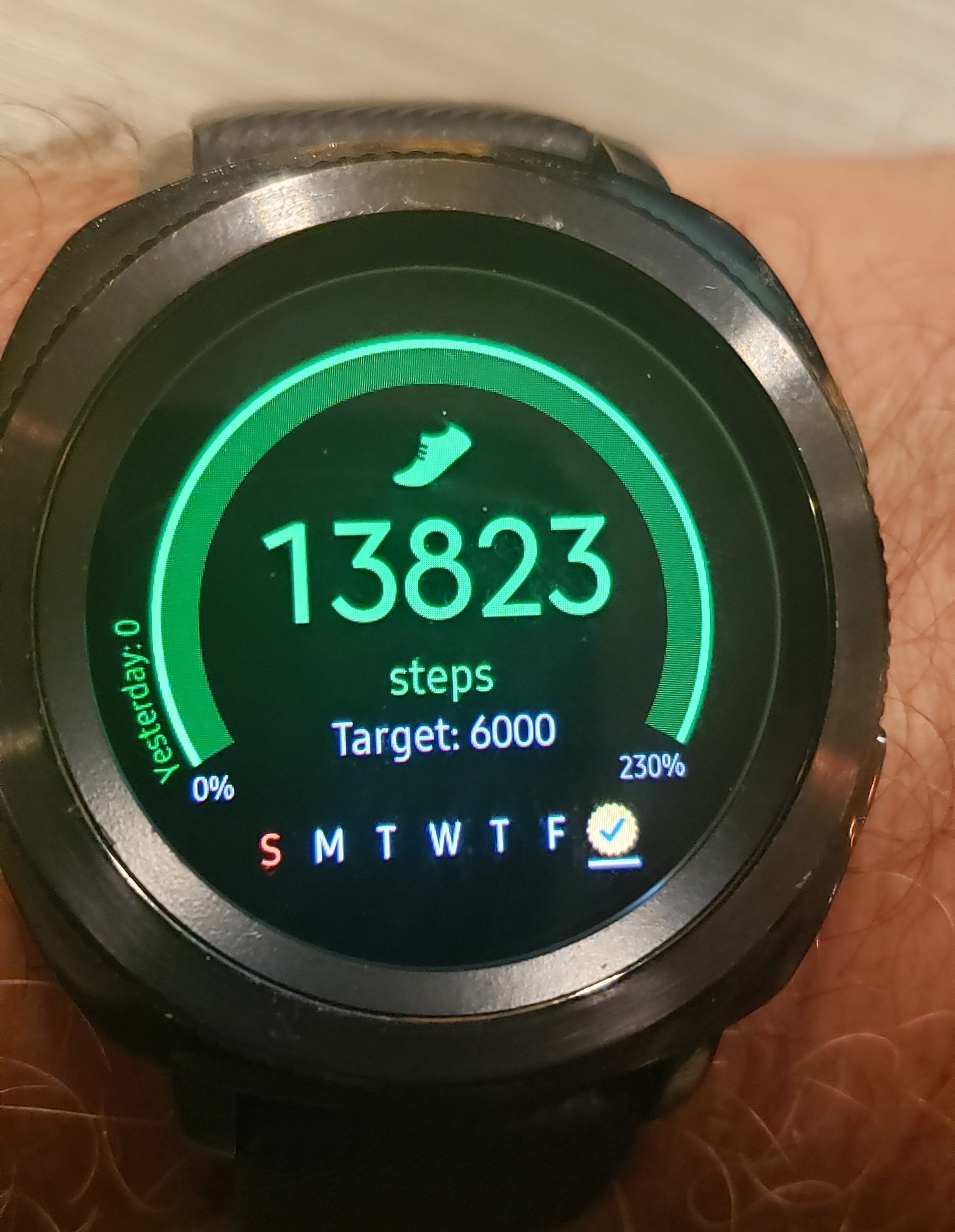 Samsung Carry the Load Columbia, SC team lead Steven Hamilton tracked his steps on a Samsung Galaxy Watch and satisfied his daily walking goal – and then some – when he and wife Dawn Hamilton walked in the South Carolina leg of the Carry the Load national relay.

The Samsung Electronics America team from Columbus, Ohio on their leg of the Carry the Load national relay on May 13, 2019. 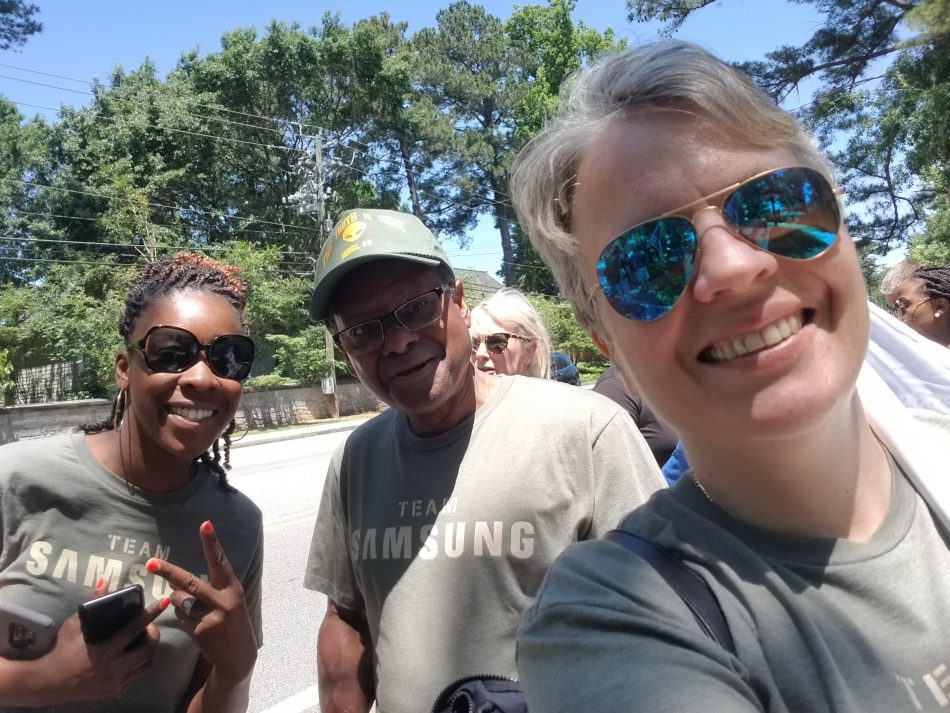 I walked to honor family and friends that served in the military,” explained Miles, including her Uncle, Father, two brothers and her husband who all served in the Air Force as well as an “adopted” Grandfather who served in the Army.

The highlight of the Atlanta leg for her was hearing a toddler share that he was walking for his uncle and later seeing him again sitting on his father’s shoulders. “This was a great example of passing honor for those that serve from generation to generation – what a great act to experience,” Miles said. 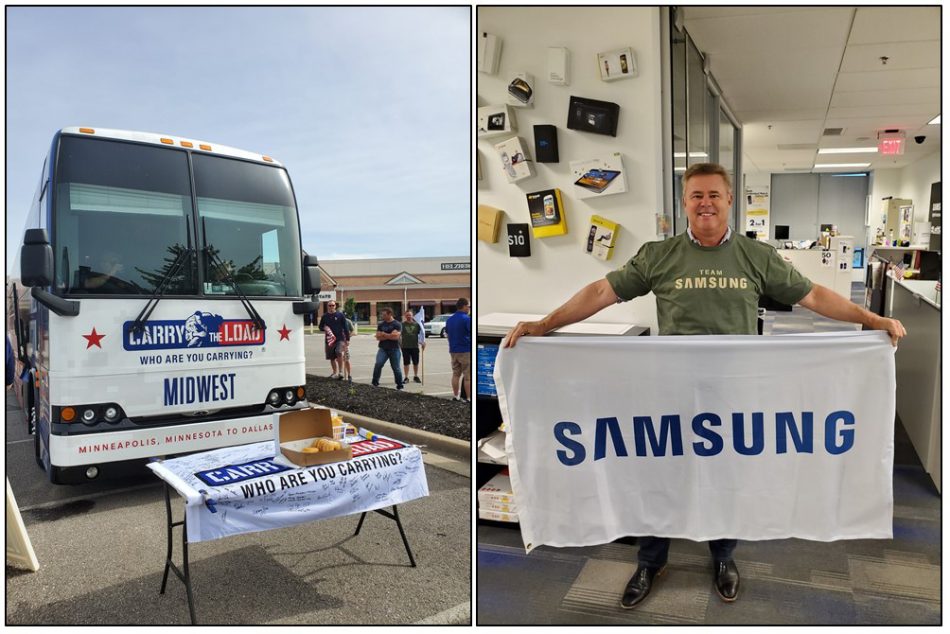 The Midwest route Carry the Load bus marked the Kansas City, MO leg of the national relay on May 20, 2019 and Samsung team member Scott Malone, national sales director for Samsung Electronics America preps for the walk.

Hager said her leg of the race was an “incredible experience,” providing an opportunity to learn about others’ stories about why they were walking and for whom, adding that she looks forward to participating in the event next year and recruiting others for the cause.

Houston team lead Michael Rentas said the walk gave the team an opportunity to not only connect with one another but also share stories of the heroes in their lives. Rentas said he walked to honor five of his fallen military “brothers” he served with in Iraq and Afghanistan. “I honor and celebrate the sacrifices made by these heroes in meaningful ways, such as this walk and other activities locally.”

On Memorial Day weekend, each national relay route culminated in the Dallas Memorial March, a 2-day event honoring service members and their families for the sacrifices they make. 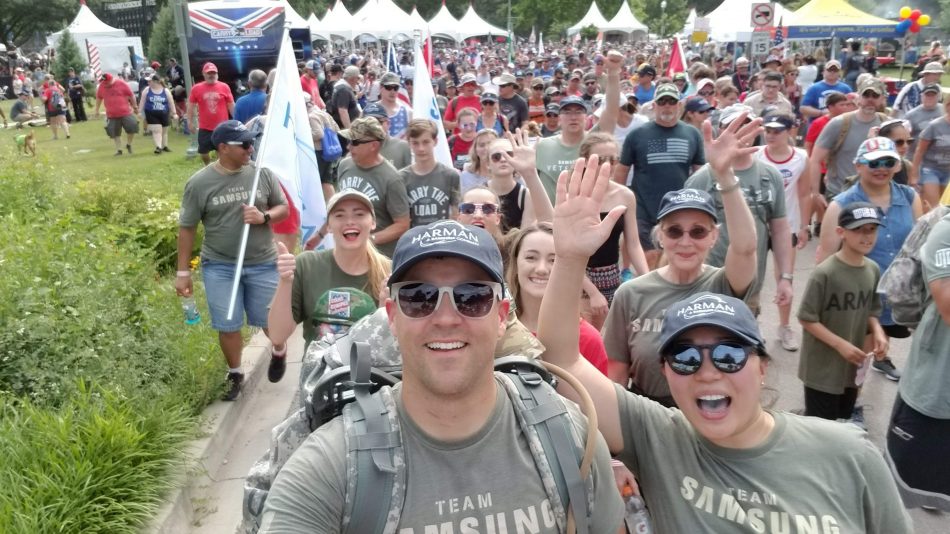 Above, employees of Harman International, a Samsung company, participate in the Dallas Memorial March. Below, the team takes a moment to show their Memorial Day and workplace pride.

The Samsung Electronics America Veterans Community is an employee-led resource group whose mission is to foster internal networking and employee engagement, give back to community-based veterans’ support organizations and provide mentorship to newly hired veterans.