For many 8th graders, contact sports like football, lacrosse, or hockey are a popular pastime, despite real risk of concussion. An even greater risk, though, is not noticing a hit has caused a concussion, until it’s too late. But for a group of 8th graders at Cavallini Middle School in Upper Saddle River, NJ the lesson was learned when a friend got hit a little too hard.

“My friend got a really bad concussion, you could see in the days after, even the weeks after he couldn’t use his computer and because my friends and I play football, I enjoy it a lot, and I just want it to be safer for me and my friends,” explained Ian L., a student at the school.

Inspired by the challenge issued by the Samsung Solve for Tomorrow contest, these friends, guided by their teacher, Jonathan Harvey, designed and coded a helmet concussion sensor and a corresponding app they named “Head Safe” to alert coaches and school officials of hard hits.

Harvey said their friend’s concussion experience fueled their passion for getting the job done. “It affected them on a very personal level, and that drove them to come up with a solution so that fewer concussions go undiagnosed,” explained Harvey.

Now, as a top 10 finalist team, selected from thousands of school applications across the United States, the group will take home $50,000 of Samsung technology for their school and compete in New York City, this week, for a chance to win another $100,000 worth of technology.

“We put in so much work since October when we first entered the competition until now. It’s great to see it all pay off,” said Jake C., another student member of the team. 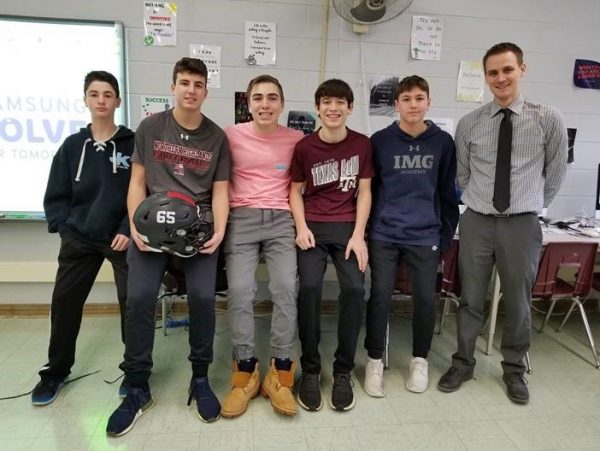 The kids used science, technology, engineering, arts and math (STEAM) skills to rise to the challenge. They learned Python and JavaScript coding and built a Micro Electrical Mechanical System sensor in order to create their prototype. The sensor calculates linear acceleration and is also able to read vibration and shock.

“It’s an accelerometer sensor that we coded to sense how much force is applied to a hit. This data is then relayed through Bluetooth to our Head Safe app. A coach can then use our app to see if a player had a hit that may need to be looked at,” explained Ian L.

This way, more players can feel safer on the field knowing that if the G forces reach a certain threshold, the right people are alerted and the athlete can be pulled out of the game.

“As a football player, going into a game, you always know there’s that risk of an injury, of getting a concussion. With our helmet sensor, now there’s a way you know you’ll be safe, so when you get hit, there won’t be another hit that will then cause you damage not just that day, that week, but years later.” said Josh C., a student member of the team.

The forward thinking demonstrated by the Cavallini students doesn’t just benefit future sports players, but also provides more students like them with the opportunity to learn and experiment with cutting-edge technology.

“To win $50,000 in Samsung Technology for our school is amazing because technology is such a big part of everyone’s lives now. To be able to provide those kinds of resources for future Cavallini students is great,” said Alex F., a student who also worked on the Samsung Solve for Tomorrow project.

“They’ll be able to use this technology, and maybe one day follow in our footsteps.”

How One School Tackled its 21st Century Energy Challenge