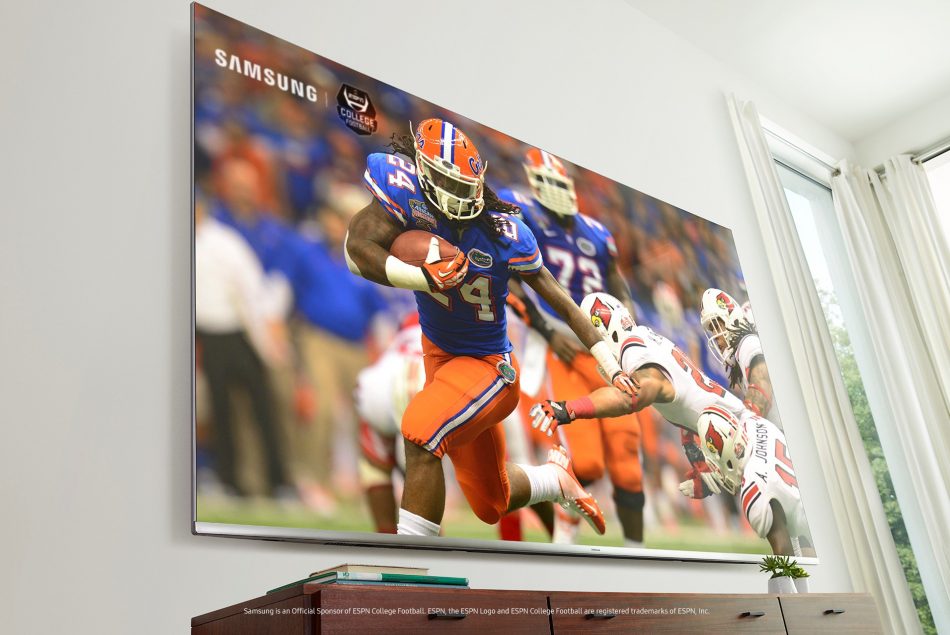 RIDGEFIELD PARK, N.J. – August 31, 2018 – Samsung Electronics America, Inc., the global leader in television for more than 12 years, announced an exclusive marketing and retail collaboration today with ESPN, the national leader in college football, to showcase Samsung’s premium QLED TVs as the best way to watch college football at home. With 4K screen sizes that go up to 88”, college football becomes even bigger and more immersive with Samsung’s lineup of big screen QLED TVs.

Samsung will highlight the capabilities of its super big screen QLED lineup at select tailgating events across the country. The tour will visit pre-game festivities at some of this season’s most intense matchups – including Big Ten, Big 12, ACC and SEC rivalries – and the most exciting playoff events, including the College Football Playoff Semifinal at the Goodyear Cotton Bowl Classic and the College Football Playoff National Championship. College football fans at these events will be able to watch live college football games from around the country on Samsung QLED TV, so they can see for themselves how QLED transforms every game into the big game. They will also be eligible to win a variety of great prizes, including a trip for two to this season’s national championship game in Santa Clara, California.

“ESPN is the preeminent leader in college football, and we’re proud to be their choice for watching all the biggest games at home,” said Grace Dolan, Vice President, Consumer Electronics Marketing, Samsung Electronics America. “No matter where your team is playing, QLED TV’s huge screen, fantastic resolution and lifelike colors make it easy to see all of the action this season. With Samsung QLED, anywhere you sit becomes the best seat in the house.”

“Watching college football with family and friends is a fall tradition,” said Ed Erhardt, President, ESPN Global Sales & Marketing. “And new technology can make your living room feel like the sidelines at the stadium. With game-changing size, color, and 4K detail, Samsung QLED TV provides a transformative experience that we look forward to showcasing during ESPN’s college football coverage.”

Samsung will feature its QLED lineup at tailgating events before the following games: 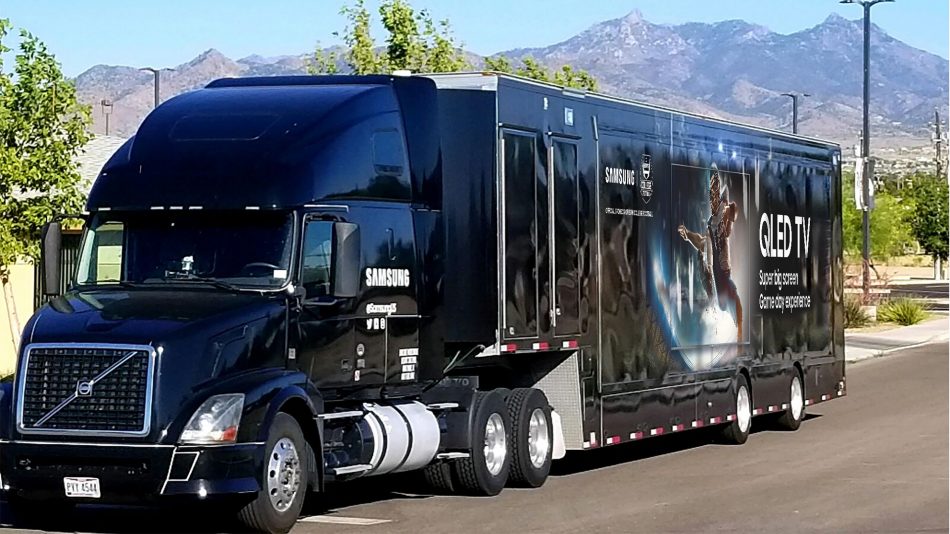 Samsung’s QLED TV takes Quantum dot technology to the next level with advancements in light efficiency, stability and a wide color spectrum. The QLED TV can express accurate color and achieve 100 percent color volume in the DCI-P3 color space, the format for most cinema screen and HDR movies for television. The QLED TV’s 4K HDR Elite features rich, deep black levels and bold contrast to display every detail on the display. Meanwhile, 4K upscaling converts HD broadcasts into 4K, ensuring that consumers get an incredibly sharp picture no matter the original resolution of the content they are watching.

At the same time, watching sports at home often involves dealing with the brightness of the daylight at the stadium and of the daylight coming into your living room. QLED TV excels in these environments, offering superior real-world performance for color, contrast, and brightness. And on particularly bright and sunny days, the QLED TV also has anti-reflection technology that helps to minimizes glare coming in through the windows.

In addition, Samsung’s new design elements can fit into any home – regardless of the interior aesthetics or setup. When the TV is turned off, Ambient Mode brings up decorative content that blends seamlessly with your décor, all while offering useful information like weather reports, traffic updates, and news headlines. You can also use Ambient Mode to display family photos or play background music. The Q7 and Q9 models also feature the No Gap Wall Mount, which brings the TV flush against the wall, closer than ever before, and the all-new One Invisible Connection cable, which powers the TV and allows placement of components out of sight. Consumers can now reclaim their living room space once occupied by set-top boxes, external streaming devices and video game consoles with a single optical cable that brings all devices together in a clean, orderly manner.

Beautiful From Every Angle: The Design of the Galaxy Note9