Creating an Environment of Belonging for Intersectional Voices

Creating an environment of belonging for intersectional voices is critical for increasing workplace and community engagement, fostering innovation, and strengthening trust.

Recently, Samsung hosted open forums with its U.S. employees to explore and learn from the identities that define our innovative culture. With the intersection of race and sexual orientation as banner topics in June, we sat down with leaders from our Black and LGBTQ+ employee resource groups (ERG) to reflect on the significance of this moment and the importance of rallying together for change. 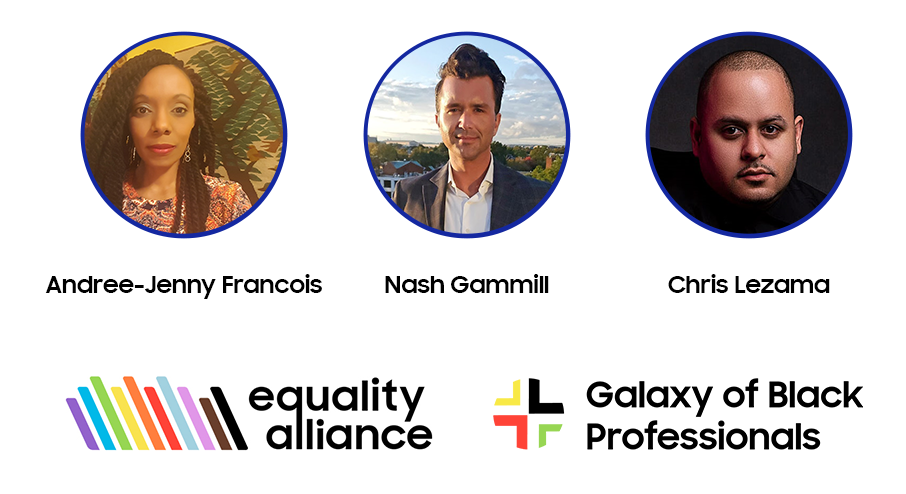 1. As members of the LGBTQ+ and/or Black communities and Samsung employees, what has this moment been like for you personally?

Chris: This moment has been one of mixed emotions. As I mourn the continued loss of Black lives in America, I am saddened and incensed. However, I am hopeful because out of this continued tragedy, there may be light. In February 2020, we created the Galaxy of Black Professionals at Samsung and the ERG has played a powerful role at this time. That said, it has been exhausting. I have become the go-to person for vetting communications, counseling fellow Black employees, and driving strategy for change. I welcome it, but it has become a second job – an added role with significant responsibilities. I power through it as the goals are important, and the movement is important. It feeds my soul, makes me happy, and provides me with an added sense of purpose.

Nash: Like many, I have experienced a fusion of powerful emotions over the last month – anger, resolve, hope, and pride. While outraged over the abject racism in this country, prior to this month I saw Pride as something uniquely LGBTQ+. Our ERGs’ intersectional approach to Pride this month, a collaboration with the Equality Alliance and Galaxy of Black Professionals, made it abundantly clear that Pride means something far different than I imagined. Pride is not exclusively about the LGBTQ+ community. Pride is about the protection, inclusion, and the celebration of every marginalized soul on this planet.

3.30.2020 / Workforce
Being Visible on International Transgender Day of Visibility

Jenny: This moment has brought up a lot of different, conflicting emotions. The continued dehumanization of life has been spoken of year after year. Why did it take another video to show that we are human beings? This pandemic has forced people to look inward and minimized the noise/distraction. Personally, I’ve been very sad and angry in the past few weeks. I want to see actual change continue and incorporated into policy that affects our everyday lives. Without the frames that allows us to see how social problems touches all people of a targeted group, many will fall through cracks and fissures. Yet, there is hope through continued intersectionality conversations. Having conversations that makes us uncomfortable will also allow us to listen, learn and grow.

2. How are the current BLM protests different from what came before? Will they usher a paradigm shift in American history?

Chris: This movement has garnered attention at a scale not seen in decades. Allies have increased exponentially. Usually support comes in a stream of platitudes, offering things that are ultimately meaningless and don’t solve the underlying systematic issues. While that also continues now, there is a difference in that many more are listening and taking action. My hope is that real change takes place that not only drives equality, but equity and eventually justice.

My hope is that real change takes place that not only drives equality, but equity and eventually justice.

Nash: I regret it took the death of George Floyd, not to mention watching the tearful faces of my Black colleagues share lifelong experiences enduring hate and prejudice, to truly accept that white racism and violence against Black lives was not only real, but systemic and rampant. From my perspective, this is no longer just a movement of Black citizens protesting white racism. This is a line in the sand requiring each American take an anti-racist stance, and we’re already seeing change set in motion.

Jenny: Real conversations are happening. People are listening and not being dismissive of one another’s feelings. And there are other small shifts occurring in that we are not commemorating a person or a group of people who fought against what this country stands for. We’re reappraising our history; life, liberty and the pursuit of happiness for all – not just for some.

We’re reappraising our history; life, liberty and the pursuit of happiness for all – not just for some.

3. It is the 51st anniversary of Stonewall and the 50th anniversary of the first Pride march. How do you feel that moment in LGBTQ+ history connects with the BLM movement we are having right now?

Chris: The Pride movement started as a result of Black trans women at Stonewall. As a result, I appreciate and celebrate the intersectionality of our causes. The connection created between the Galaxy of Black Professionals and the Samsung Equality Alliance was powerful and we were able to educate employees, and learn more ourselves about this period of time and how important it was for both movements. The LGBTQ+ community recognizing this and elevating the conversation supports and benefits the BLM movement.

Nash: The Stonewall uprising was not the first raid and subsequent brutalization of the LGBTQ+ community by the police. Stonewall, not unlike the current Black Lives Matter movement following the death of George Floyd and so many others, was a catalyst for challenging generations of inequities in the U.S. and around the world. Now, both communities are joining hands and resolutely saying ‘enough.’ Moreover, the two movements are inherently intertwined in their histories, with persons of color lighting the fuse at Stonewall sparking the LGBTQ+ community’s fight for equality that continues to this day. Succinctly put, Pride matters because Black lives matter.

Jenny: Pride started with revolutionary riots in 1969 when black and brown women had enough of police raids and brutality. The community was fed up with pervasive mistreatment and this was a direct response to the anger that was boiling over against a society that denigrated and erased LGBTQ+ lives. The current combination of the two is a complete shock to the complacent system.

4. Do you believe the BLM movement will inspire a more inclusive Pride Month?

Chris: Absolutely. Although different in numerous ways, both movements also strive for many of the same things. A unified approach will always elevate and make movements stronger. We need to support each other so that we ultimately achieve our goals and lead to a better human society.

Nash: Yes. Visually, you can see the intersection of BLM and Pride in the most current Pride flag. Our movements are without question intertwined, now more than ever. Pride extends beyond the LGBTQ+ community. Pride, BLM and other movements aren’t just demanding mere tolerance of the marginalized, but the celebration of the diverse tapestry that brings beauty to our entire human species.

Jenny: The BLM movement has always inspired a more inclusive Pride month. We – meaning both communities – understand what it means to rise up and push back against a culture that tells us we are less than equal and that our lives do not matter.

5. What would equality in action look like at Samsung?

Chris: Equality in action starts with making additional improvements to recruiting practices, specifically how we attract, identify and interview Black talent, as well as enhance retention and advancement of our current Black employees. By dedicating more resources and having an open dialogue on racial equality, equity and justice, we can evolve how we market our products and solutions to the Black community and ensure that we value the thoughts and contributions of Black employees.

Nash: Equality in action at Samsung requires a collective and concerted effort to reject intolerance on all levels. By continuing to reinforce equality from the ‘Inside-Out,’ you’ll see it show up as a reflection of our workforce’s diversity in every facet of the organization, from recruiting to product design and assortment. Equality is more than a base metric to satisfy. It should be an unabashed brand hubris rooted in diversity.

Jenny: Equality in action at Samsung is having continued conversations about gender/gender identity, race and sexual orientation and continued advocacy and support for our black, brown, and LGBTQ+ team members. Having our Galaxy of Black Professionals and Equality Alliance ERGs have helped foster these conversations, but we must do more.