Executive Interview: Tim Baxter Sits Down with The Economist

Tim Baxter, president and CEO of Samsung Electronics North America, in a candid conversation at The Economist Innovation Summit with Vijay Vaitheeswaran on March 22, detailed the company’s vision for the use of artificial intelligence (AI) in its products and services, the impending global race for 5G rollout and the importance of disruption through innovation in a business climate which is now more open to collaboration. Below are excerpts from the conversation. The full video can be viewed here.

The Economist: As the CEO of a global technology company, where does Artificial Intelligence (AI) fit in to your company’s vision?

Tim: For years, we’ve used the term “convergence” when it comes to intelligent technology.  I’m happy to say it’s actually here and being driven by consumers and their expectations for a more seamless connected device experience. We’re clearly seeing a movement away from discreet products, with discreet uses to more seamless solutions and where the application of AI comes in for a company like Samsung is the infusion of the technology in all of the components we are enabling that seamless, multi-device-experience with: the cloud, the connected car, 5G . It’s all of these components that are going to create an experience and an opportunity that doesn’t exist today.  So we view our play into the AI space and the voice assistant space with Bixby as enabling you to navigate your device – first the smartphone – and then all the other devices in our Samsung family that we’re putting Bixby into. 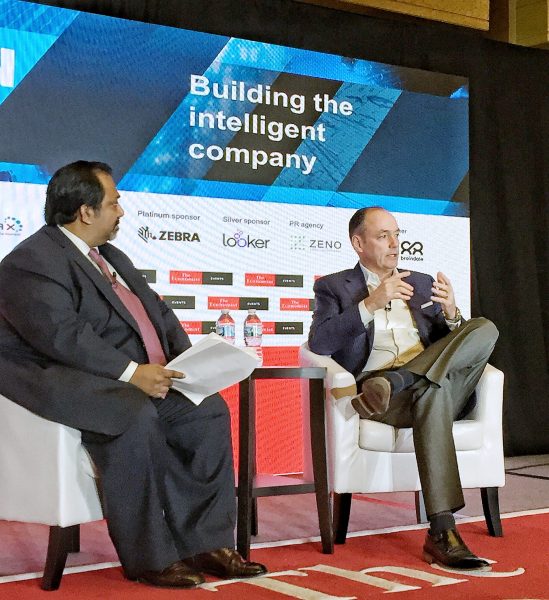 The Economist: How is AI impacting your business model?

Tim: In quite a few ways. In the business domain, marketing and customer service are two big areas that we’re focusing on and when I think about our mobile business, we target consumers in a number of different ways and traditionally there has been maybe 12 or so segments, but now we’re micro-targeting and we have 80 different segments that we look at because AI is enabling that.  For example, I can now know if you are upgrade eligible and therefore it makes sense to send you a specific offer, which is different from a customer who maybe just converted over from another operating system, for whom we would handhold their integration with the device on a much different level. So micro-targeting is a big part of how AI is impacting the way we do business. When it comes to customer care, we’re handling more and more consumers through chat bots, with the help of AI, because that is their preference rather than having a traditional phone conversation at the outset. We’re not only seeing the customer satisfaction improvement as a result of it but it’s also a cost driver.

The Economist: What is Samsung doing to embrace the idea of “open innovation” without compromising your intellectual property, how do you strike the balance as the CEO?

Tim: Balance is the right point and identifying where your company has fertile ground and the recognition that you need to create new things. 5G is a perfect example of that where there is so much excitement around it but we have to build out a lot more use cases. Some of that’s going to come from big corporations. A lot of that’s going to come from the innovators and disruptors. We have an open innovation lab in Mountain View, CA that’s doing a lot of work on 5G use cases. SmartThings is clearly another example, as an open Internet of Things (IoT) platform and we’re inviting all the leaders in the space to come on board because while the momentum around IoT has grown, it remains an area of discreet use cases, i.e. I can see what’s going on with a camera here on a specific app, but I might have 4 or 5 apps that are doing different things. That doesn’t feel as smart as it could be. So with SmartThings we’ve introduced a single app to tie all of a user’s IoT use cases together.

1.9.2018 / Economic Impact
The Samsung of Today and Tomorrow

The Economist: You mentioned 5G and South Korea has made it a national priority to leap ahead in that area. Being a South Korean company, how do you see 5G unfolding and how is it different in the key markets?

Tim: We’re excited and the anticipated availability of 5G has already moved up . We’re launching the first 5G Fixed Wireless Access (FWA) network in Sacramento in partnership with Verizon later this year. For the U.S., we think it will probably be sometime in late 2019 or early 2020 when you’ll start seeing devices out there and the networks getting deployed. So it’s progressing and clearly there’s a bit of a global race going on. What will be different is really the spectrum utilities and spectrum uses that might vary in particular markets, whereas the U.S. might have multiple spectrums, globally it might be centered more around something like 3.5 GHz so that may influence the speed at which others come to market. Think about smart cities, we’ve talked about it for some time, but the cost and capabilities haven’t really been there to do that. 5G makes a smart city really possible in compelling ways – to put sensors on poles to see car accidents in real-time, for example, and to have autonomous cars, which we’re partnering with Harman on – to be able to bring that alive is quite compelling.

The Economist: The Trump Administration has floated the idea of national 5G infrastructure, others think this should be led by companies. What is your view?

Tim: Historically, with technology and major developments, the fastest level of innovation and progress generally occurs from corporations and industry so I think that lends itself best for 5G also. Obviously there is a broader set of challenges as we are dealing with security concerns that make it more complex. I think what it really is about is, let’s get going and let’s get this deployed, and we think that industry can do that quickest.

Tim Baxter is the President and CEO of Samsung Electronics North America, responsible for the growth and success of the company’s $30 billion+ business across the U.S. and Canada. Since joining the company, he’s committed to maintaining Samsung’s leadership position as an innovator in cutting edge technology for consumers and businesses alike. Follow Tim Baxter on Twitter: @Timbaxter1.