Cultivating a Crop of Young Engineers in Rural Nebraska

When Justin Reinmuth began teaching in the town of Gering, NE in 2010 he taught shop class and electronics, but, he says shop activities were limited to soldering. “We’re just a tiny community. We just didn’t have the money,” Reinmuth recalled.

Fast forward eight years later and his one small classroom has grown to two and undergone a major technology makeover after he and his students entered the Samsung Solve for Tomorrow contest last year, and won one of three grand prizes — $150,000 in technology for their school.

“Now we have state-of-the-art computer equipment and laptops for every high school student – all from Samsung,” said Reinmuth.

This year, Reinmuth and his students decided to enter the contest again and have already won another $50,000 worth of technology for their school by becoming a top 10 national finalist team for the second year running.

“It’s just thrilling to me to be able to put my mind to and with hard work and teamwork we’ve all made this happen,” said Rachel R., a Junior and member of the Solve for Tomorrow team.

For their contest submission this year, Reinmuth guided the students in designing and building a prototype water filtration system for washing machines that prevents microplastic particles from contaminating waterways.

“The goal of the project is to help all communities preserve their most precious resource, water. With our clothes increasingly being made from synthetic materials and plastics, the engineering class at Gering feels this could be a positive step towards keeping foreign and unwanted plastics from entering into the water supply and ultimately our food as well,” Reinmuth explained in the school’s project proposal. 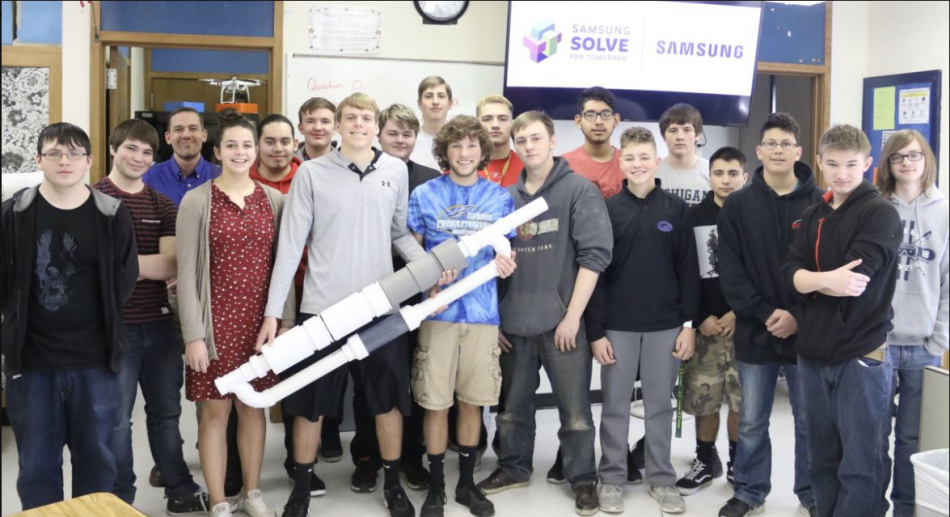 Last year’s win was not only a technology windfall that helped propel the students’ Solve for Tomorrow project this year, Reinmuth said it also piqued many students’ interest in science, technology, engineering, and math (STEM) topics and inspired them to get involved in engineering class and so much more.

“The new technology we’ve gotten in this school is amazing and it’s a lot of technology that before we would have never had the chance to use… and it’s amazing to see how much more advanced and high-tech the school has gotten in just one year,” said Matthew E., a student member of the Solve for Tomorrow team.

Now, according to Reinmuth, six graduating seniors have chosen to pursue an engineering degree at college. “We went from barely being able to have an electronics class because we were so low on student interest to two class blocks of engineering and a wait list. Winning last year boosted students’ STEM interest immensely,” Reinmuth said.

In addition to offering classes like autonomous robotics and computer-aided design, Gering High School is working toward satisfying requirements for the Nebraska Career-Academy Skilled and Technical Sciences pathway, which includes STEM-related coursework.