SEOUL, Korea – May 2, 2019 –Samsung Electronics Co., Ltd. today announced that it has signed an expansion contract with KT Corporation (KT) to provide public safety (PS-LTE) network solutions based on 3GPP standard Release 13 for 10 major metropolitan regions in South Korea including Seoul by 2020. In addition, the two companies will be delivering the world’s first narrowband Internet of Things (NB-IoT) service through the PS-LTE network.

This marks the third project in which KT and Samsung’s Networks Business unit have partnered on PS-LTE network deployments. The two previous projects were the world’s first PS-LTE network throughout Gangwon (Pyeongchang) province of South Korea using 700MHz based on the 3GPP standard in 2016 and the 2017 delivery of LTE-Railway service on a high-speed train traveling at up to 250 km/hour (155 mph) using MCPTT solutions for the first time. The two companies are now aiming to expand the PS-LTE network further into the metropolitan areas around the country, including Seoul, Gyeonggi, Gangwon, Jeolla, Gyeongbuk and Chungnam provinces.

“Samsung is thrilled about this significant achievement in the country’s public safety solutions, where our continuous efforts and innovation on technology have helped to advance safety,” said GY Seo, Senior Vice President and Head of Global Sales & Marketing, Networks Business at Samsung Electronics. “Samsung is honored to take part in this important mission with KT by providing PS-LTE solutions that will ensure seamless and stable connectivity across the nation.” 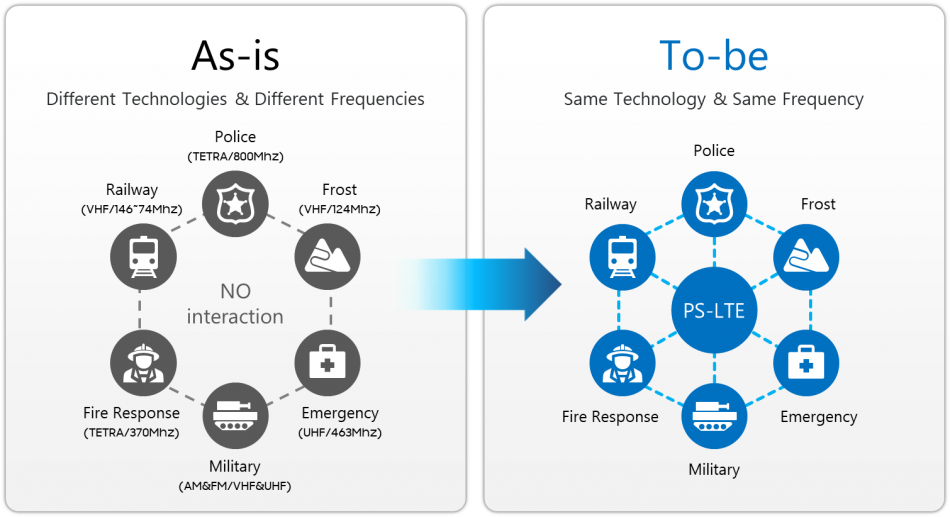 “By acquiring innovative wireless communications from Samsung, we are able to aid in life-threatening situations where data traffic is severely congested or connection is completely out of reach,” said Yoon-Young Park, Senior Executive Vice President and Head of Enterprise Business Group at KT. “These first-of their-kind networks help responders connect with those in need.”

In addition to LTE radio base stations that support 700MHz, Samsung is providing KT with virtualized core and the latest features of PS-LTE based on the 3GPP standard. Some of the key features include MCPTT solutions, RAN Sharing, evolved Multimedia Broadcast Multicast Service, Public Network IoT based on NB-IoT, Isolated eUTRAN Operation for Public Safety (IOPS), and device to device (D2D) network solutions.

D2D and NB-IoT play crucial roles in creating public safety network by ensuring stable, seamless, and reliable network in unfavorable environments. For instance, D2D allows direct and undisrupted communications between any two devices without traversing radio base stations or core networks, even in areas where bases stations are not provided.

For the first time, NB-IoT is applied to the public safety network to help prevent natural disasters like fires, as hundreds of IoT sensors are deployed to sense even the smallest size of embers, as well as people that have been stranded in remote areas of mountains that are hard to spot.