How One School Tackled its 21st Century Energy Challenge

Wisconsin may be in the Upper Midwest where the weather is known for cold winters, but it can also get unbearably hot. And in Omro High School, which doesn’t have air conditioning, that can make more than a few weeks each school year completely miserable, according to the school’s 2018 Samsung Solve for Tomorrow team.

The group of a dozen 11th and 12th graders, guided by their teacher, Robert Turner, discussed and debated ideas to submit as their project for the annual Samsung Solve for Tomorrow contest, which each year challenges 6th through 12th grade classes nationwide to use science, technology, engineering, arts and math (STEAM) to solve an issue in their community. Ultimately, the Omro High School students devised a way to passively cool the building without using expensive, energy consuming appliances.

The simple, yet ingenious idea earned the engineering students a finalist’s berth in the Samsung Solve for Tomorrow contest this year, and $50,000 worth of Samsung technology for their school.

“The kids wanted to solve a local problem, so we investigated how much energy we’re letting into our school,” said Robert Turner, who teaches physics, engineering and Earth science and coaches Team Omro.

The students calculated that, given the school’s geographic latitude and the number and size of the building’s windows, the heat value being let in from sunlight on a daily basis is equivalent to the energy of about 130 to 140 space heaters, Turner said. 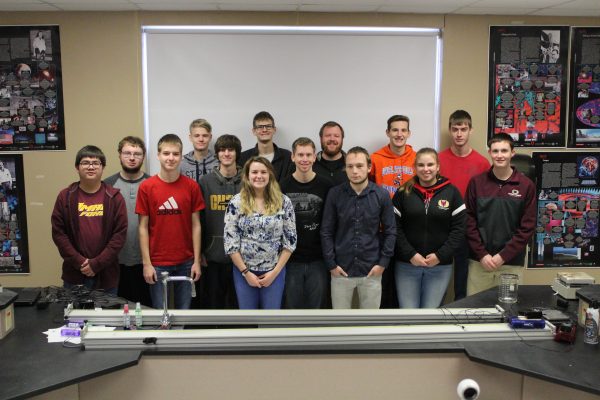 At Omro High, a panel of teachers, administrators and community members vetted the idea, and Smart Shade was on its way to becoming a reality. Students built a scale prototype and ran computer simulations of heat transfer through convection conduction and radiation. They found the temperature difference was significant.

Smart Shade moves up or down with a remote control the size of a car key fob.

“The next step is automating it with a small computer so that the shade can adjust based on the time of day or time of year,” Turner said.

Better yet, he said, the students also discovered they could design the same shade used in the summertime to reflect more light into the school during cold months “and buffer the heat bill a bit.” The technology used to passively cool the school could also potentially be applied to other buildings across the community.

Turner said his students “drive themselves,” and their process requires little facilitation.

“The kids did all of this.”

“Now other kids are coming in and saying, ‘Hey, what’s this engineering class all about?’”

The beauty of the contest, he said, is that it demonstrates how science, technology and math classes fit together.

“If forces students to use all of those skills for one purpose, instead of putting them all in their own silo,” Turner said.

“This competition hits everything that I’m trying to get across to the kids.”