Don’t Let Your Phone Slow You Down: New Data from Ookla Shows the Galaxy S9 and S9+ are the Fastest Phones Ever

RIDGEFIELD PARK, NJ – May 15, 2018– The Samsung Galaxy S9 and S9+ are the fastest smartphones on the market, with download speeds that are up to 42% faster than the closest competitor’s newest devices1, according to Ookla®, a leading mobile data speed analyst. Able to support the best download speeds carriers have to offer, the Galaxy S9 and S9+ will give users the performance they’re looking for this summer travel season. From downloading movies for long trips, to sharing photos from amazing vacations, consumers want access to the fastest networks, and phones that won’t slow them down. 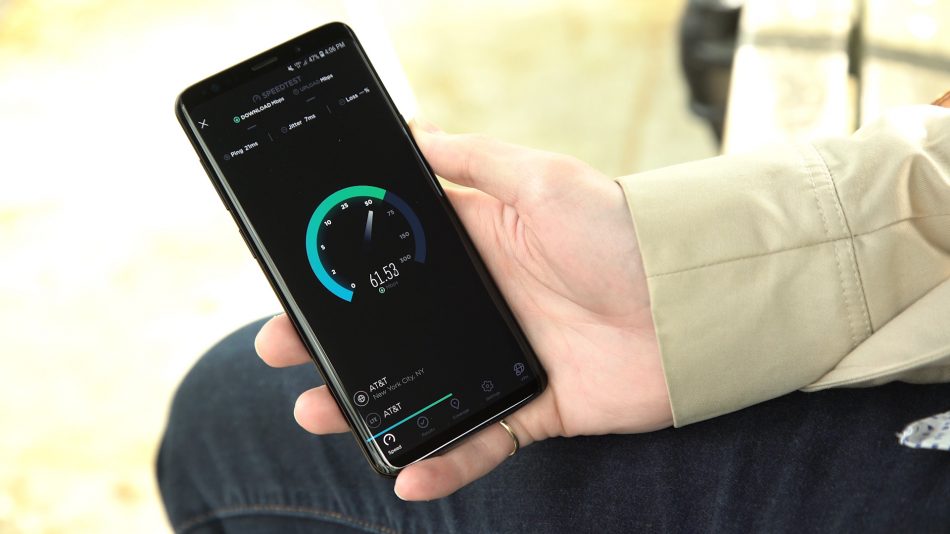 When it comes to download speeds, not all phones are created equal. Wireless carriers’ data services are made up of multiple networks—some fast lanes, and some slow lanes—that phones are constantly switching between. To get into those fast lanes, and to get the most out of the wireless service they’re already paying for, consumers need phones with the most innovative technology, like the Galaxy S9 and S9+’s CAT 18 LTE modem, which supports network speeds of up to 1.2 Gbps.

“This summer, consumers are going to be on the road, at the beach, and relying on their phones more than ever, but without the latest and fastest network technology that’s available in the Galaxy S9 and S9+, their phones may quite literally slow them down,” said Justin Denison, Senior Vice President, Mobile Product Strategy and Marketing at Samsung Electronics America. “At Samsung, we’re constantly innovating and developing products that set the new standard for the industry. Our Galaxy owners never need to worry about whether they’re getting the best possible experience from their phone.”

This summer, speed is a must. More than 4-in-5 (85%) Memorial Day weekend travelers say it’s important to have shows, videos, or movies to watch while they are traveling to their destination. And two-thirds have even rushed to download something on their phone before a flight was taking off3. With the high-performing Galaxy S9 and S9+, travelers will be able to enjoy the fastest networks to download their favorite content.

For parents, speed is even more important. 72% of parents say that not having entertainment options for themselves or their family is one of their top three stressors while traveling4.

In addition to download speeds, the Galaxy S9 and S9+ have been recognized for their multiple high-performance features. These include a dual-aperture camera, long-lasting battery, IP68 water and dust resistance, and most recently, double or even quadruple the storage in a new, high memory option. Whether users are sharing and sending summer photos from backyard barbecues, hanging out with friends on the beach, or loading up TV shows and movies for a long plane ride to visit family, the Galaxy S9 and S9+ are the perfect phones for the summer.

To highlight the need for a phone that doesn’t slow you down, Samsung is launching a new TV commercial. Debuting this week, “Moving On,” follows a woman who is frustrated with her phone as she travels to see her sister. In the end, she upgrades to Galaxy.

Ookla®, the company behind Speedtest®, is the global leader in internet testing and analysis. Used nearly twenty billion times worldwide, Speedtest is the most accurate way to measure internet network performance. Speedtest provides people with independent insight into the speed and quality of their mobile and fixed broadband connections. This gives consumers the information they need to understand and troubleshoot their internet experience. Ookla transforms these billions of real-world tests into vital research tools. The company’s flagship enterprise product, Speedtest Intelligence, is used by ISPs, carriers, businesses, universities and government agencies alike who trust Ookla’s commitment to quality and neutrality. With headquarters located in Seattle, Washington and additional offices in Dublin, Ireland, Ookla has been providing global insight into the telecommunications industry since 2006.

3The Samsung Survey was conducted by Wakefield Research among 1,000 US consumers ages 18+ who currently own a smartphone, between May 8thand May 9th, 2018, using an email invitation and an online survey.

4The Samsung Survey was conducted by Wakefield Research among 1,000 US consumers ages 18+ who currently own a smartphone, between May 8thand May 9th, 2018, using an email invitation and an online survey.

Executive Interview: A 360-Degree View of the Digital Health Frontier