Raptors in Our Backyard: The Biodiversity of New Jersey’s Wetlands

Since 2014 our team at Samsung Electronics America in Ridgefield Park, New Jersey has partnered with Hackensack Riverkeeper, an organization dedicated to cleaning up and protecting our local waterways and their surroundings. Here’s why. 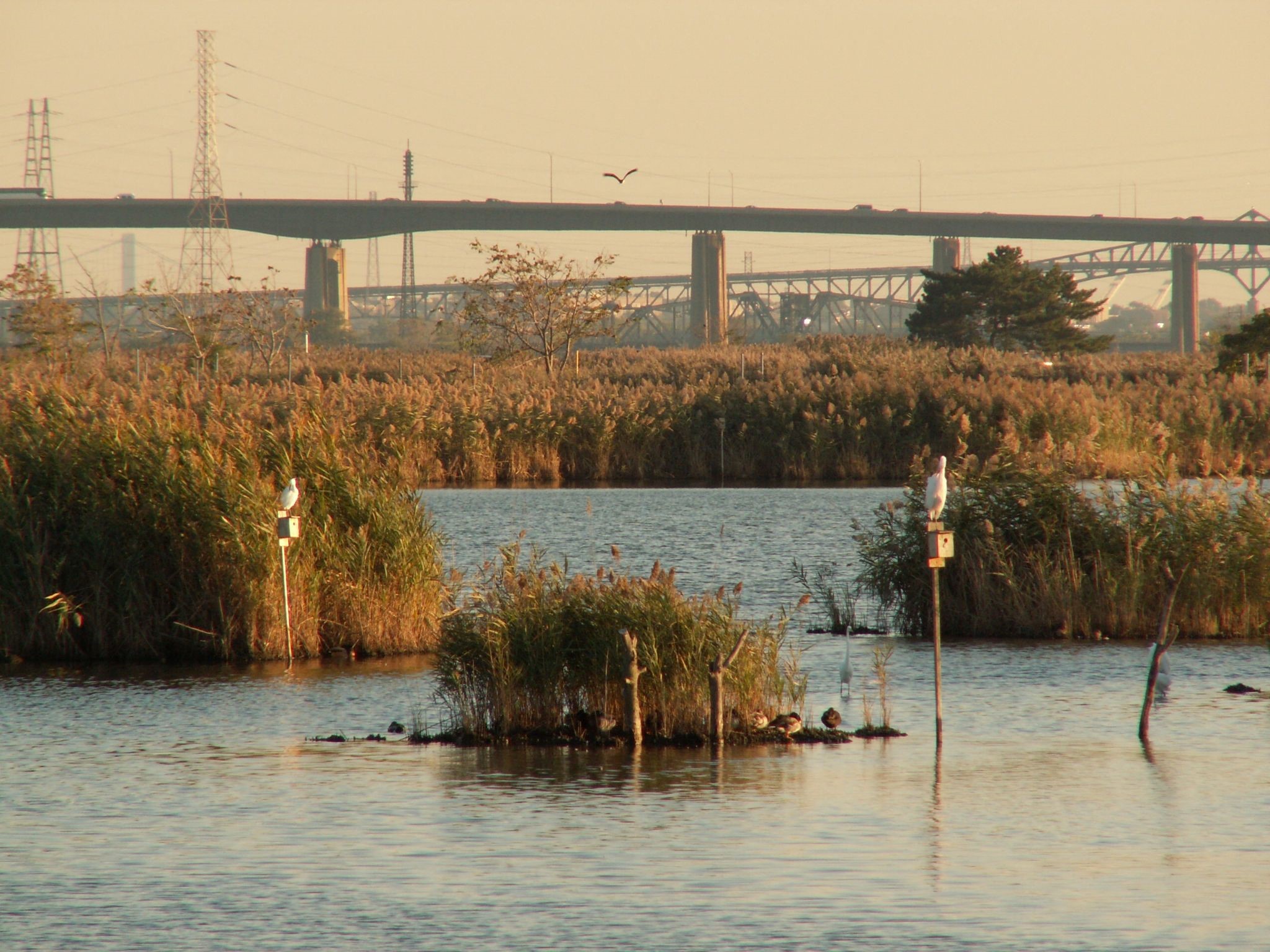 Overpeck Creek is a stretch of shallow water flanked by tall reeds and leafy maple trees. Around the northern edge of the creek are over 800 acres of sports fields, playgrounds, and green grass known as Overpeck County Park. On the southern edge of the creek one can find our Samsung Electronics America North American headquarters – a blue and white glass building where over a thousand of our employees work.

The Hackensack River, until very recently, was one of the most polluted waterways in America.

“For years people thought that the Hackensack River was a handy little disposal site,” says Captain Bill Sheehan, founder of Hackensack Riverkeeper, a celebrated non-profit that has been stewarding the protection of the New Jersey Meadowlands (the large ecosystem of wetlands also known as the Hackensack Meadowlands) for over two decades. “Companies up and down the river would use it to dump their waste.”

For years people thought that the Hackensack River was a handy little disposal site.

Sheehan and his team have been Riverkeepers of the Hackensack since 1997. With the help of thousands of volunteers from New Jersey and beyond, Riverkeeper has collected tons of garbage, lobbied politicians and companies for reform, and most importantly – educated New Jerseyans about the biodiversity of their local wetlands through fun river clean up days, paddling programs, nature walks, pontoon cruises, and more.

Sheehan finds that sharing the story of the biodiversity of the Hackensack Watershed really drives home the need for cleaner waters.

“People had no idea what was out there. They would drive by the meadowlands doing 60-70 miles an hour on the turnpike, and not realize that there were threatened and endangered species standing on the edge of the water just a few feet from where they were driving.”

Scientists have long studied the biodiversity of northeast New Jersey. An oft-cited paper from scientists Dr. Kristi MacDonald and Dr. Erik Kiviat titled Biodiversity Patterns and Conservation in the Hackensack Meadowlands, New Jersey from the journal Urban Habitats gives a glimpse of just some of the species documented: “260-plus birds (33 of which are state-listed as endangered, threatened, or declining), 22 mammals, 51-plus fishes, 51 bees, and 420 plants.”

There’s a lot of life among those reeds. 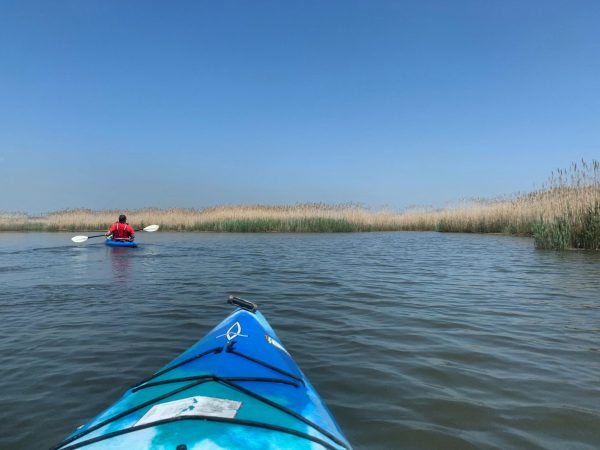 When discussing the biodiversity of the Hackensack, the Riverkeepers often highlight species such as birds, fish, turtles, burrowing creatures like muskrats, and even suburban mainstays like skunks, squirrels, rabbits, and deer.

Unfortunately that's how pollution gets distributed into the food chain. It starts out with the critters that live down at the bottom of the river, absorbing it.

Yet, Sheehan says that this is only part of the story. When looking at the impact that pollution has on biodiversity, it’s not just about studying one species, or a list, but rather a whole ecosystem of critters and how they all interact.

“There are over 70 species of marine life that live in the waters of the Hackensack. That includes everything from small, tiny bait fish like killies (killifish) or glass shrimp at the bottom of the food chain – to the top of the food chain where you have predatory fish that can be up to 40 pounds like bass, catfish, blue fish, and white perch. Unfortunately that’s how pollution gets distributed into the food chain. It starts out with the critters that live down at the bottom of the river, absorbing it.”

We are avid supporters and beneficiaries of the work Riverkeeper is doing to protect our local waterways.

Given the amount of pollution that was dumped into the Hackensack River before the Clean Water Act and other key environmental laws that were passed in the 1970s, humans still cannot eat fish from the Hackensack River, or even swim there. This is especially disheartening for Sheehan, as New Jersey State follows the Public Trust Doctrine, a legal principle wherein all public lands and waterways are meant to be protected for public use.

Yet, there is hope that fishing and swimming in the Hackensack can eventually be possible. Oftentimes this hope for the river can be seen in unlikely places, like the sky.

One recent Riverkeeper program helped to bring back the local osprey, a large raptor fish hawk that was listed as endangered by the New Jersey Division of Fish & Wildlife back in 1973.

“Osprey are large birds of prey. They live exclusively on fish. And for about 75 years they were extirpated in this watershed completely, because the pollution was keeping the fish out of the water. So there really wasn’t anything for them to eat. And they were also being murdered by DDT, which you will know from Rachel Carson’s book Silent Spring in the 60s that alerted people to the hazards of DDT. And DDT would get into the food chain, and then birds of prey at the top of the food chain like eagles, osprey, and peregrine falcons were disappearing from the skies because they couldn’t reproduce. That’s one of the many reasons why there were no osprey here for about 75 years.”

What could have been the end of a local species turned into a success story, thanks in large part to the patient efforts of the Riverkeepers.

“In 1995, we installed some nest boxes along the river in case a pair of osprey wanted to come back and start raising their kids here. A few years later we had a pair move into one of those boxes. And now here we are, not even 20 years later, and we’ve got over 25 osprey nests between the lower Hackensack river and up into the reservoirs. Even on Overpeck Creek (Samsung’s backyard) we’ve got an osprey nest. We went from zero osprey to 25 families, and each one of those families goes back each year and nests, where they raise two to three young. When those young mature, they’re going to come back and establish their own nesting sites. This is one of the biggest biological success stories that we have.”

We went from zero osprey to 25 families.

It’s victories like these that keep the team at Riverkeeper going. Though there is still a lot of work to be done to clean up the pollutants found at the bottom of the river like chromium, cadmium, lead, nickel, and copper, Sheehan says the tide will continue to change.

This progress is one of the many reasons why we are proud to partner with Riverkeeper as neighbors in their efforts to clean up our shared backyard. 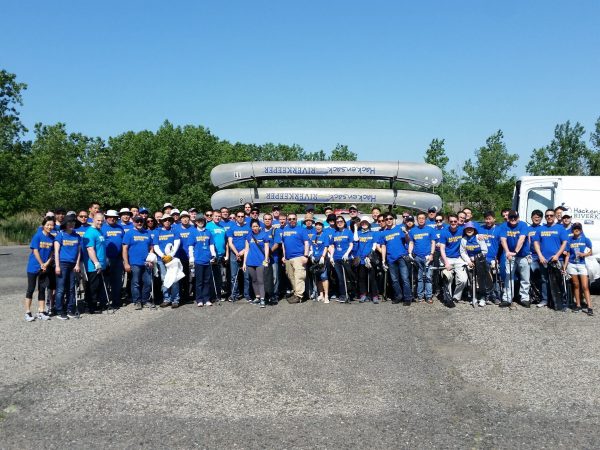 Since 2014 several hundreds of Samsung Ridgefield Park employees have thrown on mud boots, grabbed waste pickers, and paddled alongside Riverkeeper to do our part to help clean up the Hackensack River, and protect our special ecosystems among the reeds. Our continued support led Hackensack Riverkeeper to honor Samsung with its 2018 Corporate Environmental Stewardship Award and in December 2021, Samsung Electronics America was recognized as a Northern Harrier level sponsor.

Our friendship is one that, for Samsung, couldn’t make more sense.

“We are avid supporters and beneficiaries of the work Riverkeeper is doing to protect our local waterways,” says Ann Woo, senior director of corporate citizenship, Samsung Electronics America. “Their commitment to re-establishing the habitat of the Hackensack means that our backyard in Ridgefield Park will continue to be a healthier and more vibrant place for everyone to enjoy – for decades to come.”