“Since introducing CSP technology to the industry in 2014, we have put extensive effort into advancing the performance levels and design flexibility of every one of our CSP LEDs,” said Yoonjoon Choi, Vice President of the LED Business Team at Samsung Electronics. “Samsung will continue to bolster its competitive edge in CSP technology, enabling the widest variety of luminaire designs with exceptional performance, reliability and cost benefits for lighting manufacturers worldwide.”

The enhanced FEC LEDs are based on Samsung’s most up-to-date CSP technology which builds TiO2 (Titanium dioxide) walls around the side surfaces of the chip to direct light output upwards. The technology provides considerably higher light efficacy than conventional CSP LEDs while offering greater flexibility for luminaire designers. Moreover, dramatically reduced cross-talk between neighboring packages allows each package to be placed in close proximity to one another. 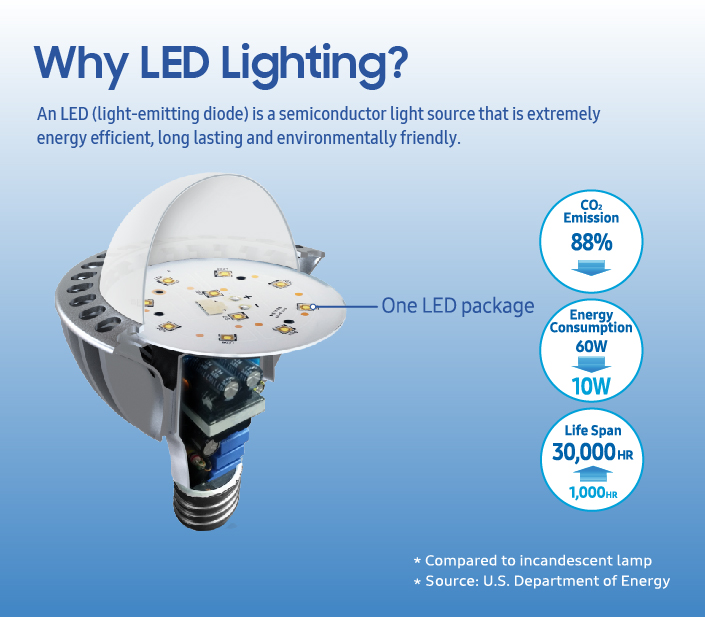 Building on these advancements, the revamped FEC LED packages achieve the industry’s highest light efficacy levels, to suit an even wider range of lighting applications. The mid-power CSP, LM101B, features an increased efficacy of 205 lm/W (65mA, CRI 80+, 5000K), which is the highest among 1W-class, mid-power CSP LEDs. The 3W-class LH181B provides the highest light efficacy in its class with 190lm/W (350mA, CRI 70+, 5000K) which represents a more than 10-percent enhancement over the previous version. The 5W-class LH231B package continues to offer 170lm/W (700mA, CRI 70+, 5000K), the industry’s highest efficacy for the 5W class.

With Samsung FEC’s small form factor and reduced cross-talk, the LM101B is particularly well suited for spotlighting applications where packages can be densely placed within a small light-emitting surface area. Samsung also made the LM101B much simpler to mount compared to other mid-power CSP LEDs, by modifying the electrode pad.

In addition, the LH181B operates at a maximum current of 1.4A (Amps), making it an ideal component for high-power LED luminaires requiring superior lumen density.

The Samsung FEC lineup, now in mass production, is available in a full range of color temperature (CCT) and color rendering index (CRI) options. Samsung will be showcasing its complete lineup at Light + Building 2018 in Frankfurt, Germany, March 18-23. Please visit Booth B04, Hall 6.2 to learn more about these state-of-the-art LED component solutions and dozens more.

Philips and Samsung Team Up to Expand the Connected Health Ecosystem