5 Questions About DE&I with Randell Christopher

Diversity. Equity. Inclusion. Three significant words often strung together with the power to shape a stronger company culture and workplace environment for all.

At Samsung, it’s part of our company’s heritage to push boundaries and defy barriers to achieve meaningful progress and power bold innovation. But innovation doesn’t just happen — it is designed by humans for humans. And a critical ingredient is our inclusive culture and diverse workforce. Our company is made up of nearly 270,000 people around the world of different ethnicities, races, genders, sexual orientations, identities, religious beliefs, and abilities. But together, we’re ONE global team united by Samsung’s purpose and values.

Action is another noteworthy word. Samsung is continuing to make progress on our journey towards driving meaningful change. And we want to spotlight the DE&I champions within our organization that have been and continue to be instrumental in enabling us to make an impact and helping to create a rich sense of belonging where everyone can thrive. 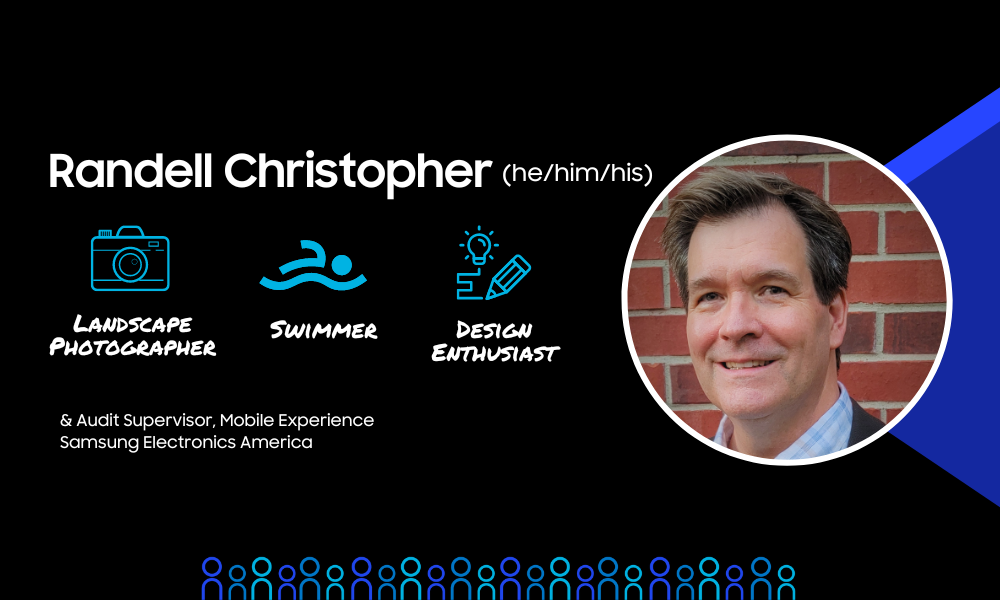 1. What does diversity, equity, and inclusion (DE&I) mean to you, both personally and professionally?

When I was young, my mother instilled in our family an insatiable appetite for learning about other cultures and people with diverse backgrounds. Her curiosity (and lack of social awareness) meant that we met and connected with many interesting people. My niece recently reminded us of the pow wow celebrations they attended years ago and the time they danced with Indigenous people. So, from a personal perspective, the memory of my mother is a reminder that the world is so much richer than we imagine if we open our hearts and minds to other people, their cultures, experiences, and perspectives.

From a professional standpoint, a successful DE&I strategy provides a framework for an organization to review existing practices and policies and implement new ones for a more equitable and inclusive workplace. I feel fortunate to have had the opportunity to continually reflect on structural inequities, learn about and conquer my own biases, and push for change through my participation in Samsung ERGs and the DE&I Council, a diverse group of leaders from across Samsung Electronics America who are spearheading efforts to create an organizational culture that promotes inclusion and belonging, as well as through various trainings and seminars.

2. What has been your greatest learning or most exciting experience in your career journey as it relates to DE&I?

The most exciting experience happened in 2019, when out of the blue I was invited to a workplace summit by Out & Equal , a non-profit organization dedicated to LGBTQ+ workplace equality. It was both thrilling and a bit overwhelming because I was among 5,000+ professionals who were either allies or members of the LGBTQ+ community and were working towards a better environment for all. The summit provided DE&I and ERG Leadership and Management training sessions and seminars by LGBTQ peers.

Earlier this year, I also had the most profound DE&I training here at Samsung given by the Groundwater Institute, a partnership between the Racial Equity Institute and Impactive. The training created a solid framework for understanding aspects of racism and its consequences. It was deeply moving. The training helped me to see my own privilege and the intended or unintended effects of policies.

3. How have you seen diversity efforts progress in the workplace during your career?

At the beginning of my career – prior to Samsung – there was no DE&I framework in the workplace. Cultural offenses were not addressed and, if they were, those with seniority or rank were typically supported. There were gross generalizations that went unchecked because it could mean one’s job. While DE&I progress appeared to stall at work, it seemed like other parts of society moved forward, recognizing that a multicultural society has strengths.

Samsung is devoted to its DE&I journey and is constantly striving to make the workplace more equitable and inclusive. That journey requires transparency, honesty, a willingness to learn, an effort to educate, and open communication. Together, we can become better team members and thus create stronger teams, which will contribute to our overall success.

4. Can you share a little about what’s shaped your passion for creating a more equitable workplace?

During my formative years in school to adolescence, my class was the first to be integrated from the first grade through graduation in my hometown. When I saw how people perceived as “other” were treated, it made me question the normative assumptions all around me.

From that point, I made a commitment to become aware of the widespread assumptions, patterns and norms that exert enormous influence over people’s decisions, choices, and behaviors. And the experiences of the LGBTQ+ community in the workplace has motivated me as well. Among some of the harrowing stats:

In fact, knowledge of such statistics initially made me hesitant to come out, but ultimately it was not something that I felt could or should be suppressed.

Samsung understands the value of community. In working to make our company a stronger partner for LGBTQ+ community members, we can build a safe and creative space where everyone can feel comfortable sharing their experiences and their bold ideas.

5. What’s one simple way your fellow colleagues can turn allyship into action?

Sometimes social and cultural norms keep people from communicating as directly as they would like or in a way that their colleagues might expect. If you find that colleagues are not listening to certain individuals, amplify the voices of those not being heard by repeating their pertinent comments and giving the individual the credit.

Also, one of the issues that many individuals in the LGBTQ+ community have is knowing when it is safe to be open. By joining an ERG and adding the ERG logos to your email signature, you’re sending a message that you are a person who is supportive of that ERG’s members and DE&I more broadly.