Chicago Police Department is rolling out a pilot of Samsung’s DeX in Vehicle solution, providing officers the ability to dock their Galaxy smartphones and access policing applications on a dash-mounted display and keyboard.

The mobile-first initiative, announced at a press conference on August 21, aims to leverage the power of officer smartphones to streamline in-vehicle computing access. Officers participating in the pilot will be able to access computer-aided dispatch and other Chicago Police Department systems to conduct background checks and complete reports. Photo and video evidence captured on the smartphone will also be immediately accessible to attach to reports. The initial pilot will roll out for CPD’s 11thdistrict.

“Nearly half of all Chicago Police officers have a department-issued Samsung smartphone already,” said CPD Superintendent Eddie Johnson. “The pilot we are announcing today will pair these phones with the Samsung DeX in Vehicle solution. The idea is to give officers everything they need to process a scene or respond to an incident in the palm of their hand.”

Chief Jonathan Lewin of the CPD Bureau of Technical Services described the evolution of in-vehicle computing over the past three decades.  “The old computers had to stay in the cars,” he explained. “With this solution, it really creates an ecosystem that takes all the technology and makes it available to officers on the street in real-time and at significantly less cost than we are paying now.” 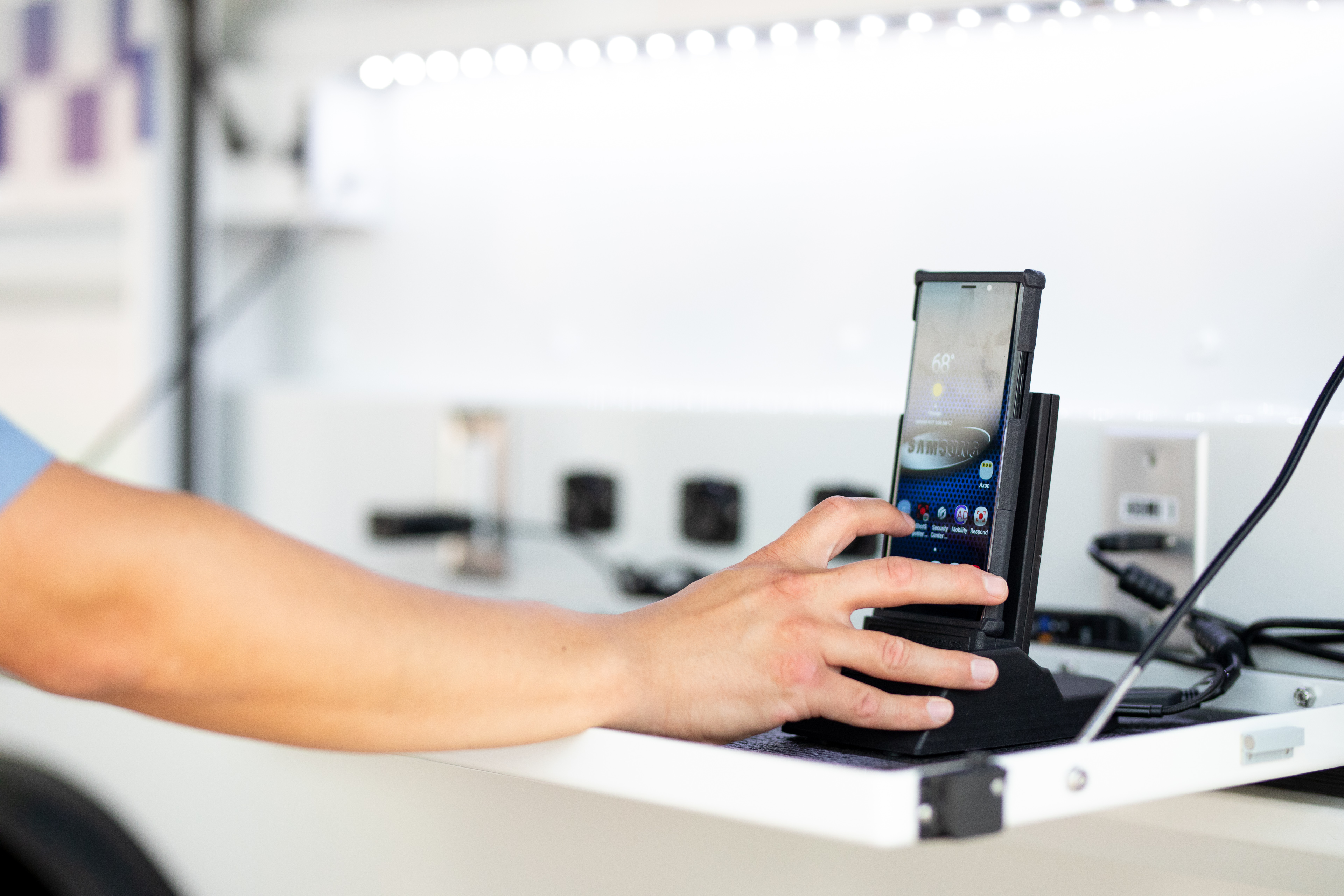 What is Samsung DeX?

Samsung DeX was first introduced in 2017 and has gained significant traction from businesses and other organizations seeking to consolidate endpoint computing and management. It enables users to connect their smartphone to a display via an HDMI cable and access a PC-like experience, complete with paired monitor and mouse. Users can multitask by accessing multiple apps with resizable windows and typical desktop features like drag-and-drop and keyboard shortcuts.

To optimize the solution for public safety use, Samsung has partnered with leading outfitters and software providers to create an ergonomic, streamlined in-vehicle set up and ensure full compatibility with key applications.

Beyond the vehicle, DeX can also be leveraged to replace computing terminals in the police station. Returning to the report center, officers can connect their smartphone to a monitor, keyboard and mouse to complete paperwork. This further consolidates endpoint management, while providing a seamless digital transition for personnel from the street, to the vehicle and the station.

“Chicago Police Department is one of the largest and most tech-savvy public safety agencies in the country,” said Reg Jones, head of public sector sales at Samsung Electronics America. “They are leading the way through the adoption of mobile platforms and applications in a way that really makes a difference for officers in the field.”

In a case study commissioned by Samsung, the Public Safety Network estimated transitioning from rugged in-vehicle laptops to a full one-to-one deployment of Galaxy smartphones and DeX in Vehicle could save agencies more than 15 percent in year one savings and more than 32 percent in annual savings thereafter. Agencies can use Samsung’s calculator to estimate potential savings achieved in deploying DeX.

“Smartphones offer so much potential in public safety, improving information access, situational awareness and officer safety,” said Jones. “Samsung DeX means departments can more proactively invest in mobile devices and applications, because they are extending that benefit into the vehicle and station. In the long-run, it offers greater capabilities, greater access and reduced costs.”