The evolution of digital signage – a type of display technology that’s used to deliver key information in an intuitive manner – has been remarkable. Today, digital signage enriches our daily lives with eye-catching content in all kinds of spaces, including plazas, shopping malls, cafes and more. 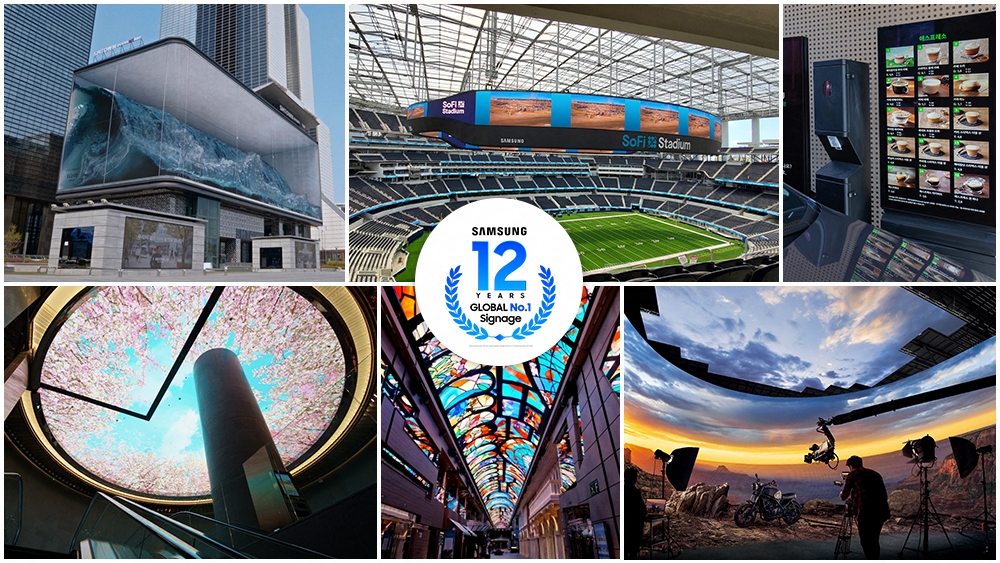 By utilizing digital signage as a media art platform, Samsung Electronics has been paving the way for the expansion of the technology’s role. Today, the company is the world’s No. 1 digital signage manufacturer, having developed products that support a wide range of consumer experiences in locations across the globe.

In celebration of Samsung’s participation in InfoComm 2021 – North America’s largest audiovisual industry event, set to take place in Orlando, Florida from October 27–29 – let’s take a look at the stories behind some of Samsung’s most stunning digital signage.

Both the global digital signage market’s size and the speed of its growth have been impressive by any measure. According to Omdia, a leading market research firm, the global signage market is expected to reach a whopping $19.9 billion by 2023. With a 33 percent¹ market share by volume as of the first half of this year, Samsung maintains a firm grip on the No. 1 position in the LCD smart signage market.

In the era of social distancing, the digital signage market has seen rapid growth. This is because digital signage is being utilized in all types of locations, including everything from kiosks that offer integrated solutions for orders and payments, to drive-throughs that allow customers to view menus and order food from the comfort of their car. As people’s lifestyles have begun to change, companies have been placing greater emphasis on digital communication. As such, the role of digital signage has expanded to encompass various functions that complement such lifestyle changes.

Whether it’s depicting an enormous waterfall in the middle of New York’s Times Square, or crashing waves in downtown Seoul, Samsung’s vivid and scalable outdoor signage instantly transforms the vibe of any space. 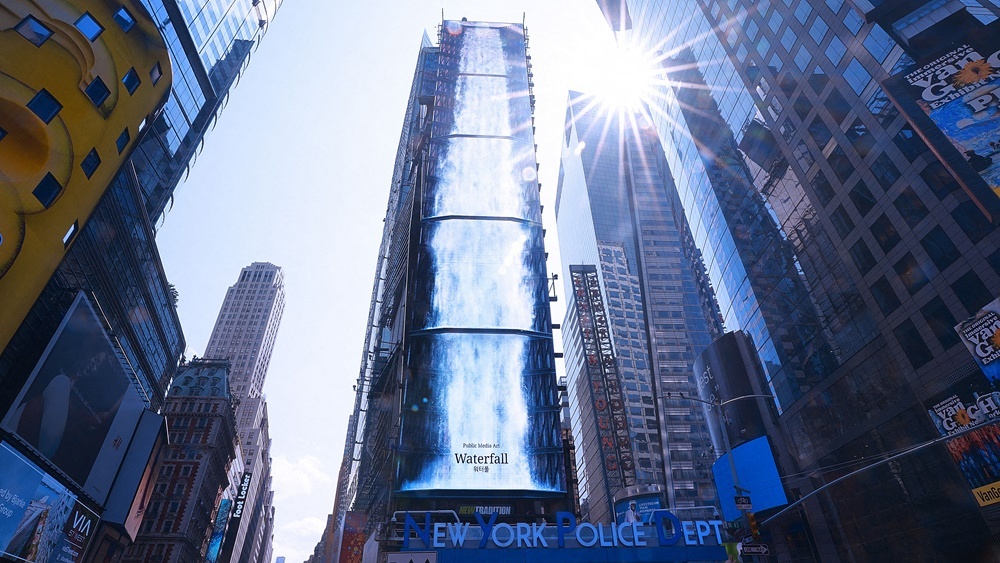 Samsung SMART LED Signage is installed on the side of the One Times Square building in New York’s Times Square. Roughly 110 meters tall and measuring more than 1,081 square meters in all, the signage, which boasts a tight LED pixel pitch and 9,000 nits of brightness, vividly displays a work of art known as “Waterfall-NYC (2021).” The digital artwork depicts cool water cascading from an enormous waterfall.

Samsung SMART LED Signage measuring 1,620 square meters (four times the size of a basketball court) is installed on the exterior of COEX’s SM Town in Samseong-dong, Seoul. The signage makes full use of its unique L-shaped design to depict a strikingly realistic three-dimensional wave. The installation is the result of a partnership with the Seoul-based design company d’strict, which also created “WAVE,” the work of art that is on display.

Like the signage pictured above, the massive LED screen at SoFi Stadium in Los Angeles captivates crowds with exciting visuals. Stadiums have always been places that are full of exciting sights and sounds, where crowds of people gather to cheer on their favorite teams. Now, visitors to one of the premier stadiums in the NFL can enjoy an unforgettable game experience made possible by Samsung signage.

The 360-degree, dual-sided curved LED screen that hangs above the field at SoFi Stadium in Los Angeles, California measures 6,500 square meters in all, making it the single largest screen in the world. It is also the first stadium display to feature 4K picture quality, offering fans a vivid viewing experience from anywhere in the stadium. Approximately 9,100 square meters of Samsung LED signage have been installed on the stadium’s roof and around its exits.

Whereas large outdoor signage captivates audiences in open spaces, indoor signage can help heighten individuals’ excitement in a variety of settings, including when traveling.

Travelers from around the world may experience that excitement when encountering the S-shaped wall of Samsung SMART LED Signage in Finland’s Helsinki Airport. Meanwhile, the curved signage installed on the ceiling of MSC Cruises’ cruise ship, the MSC Grandiosa, enhances passengers’ experience with beautiful works of art. 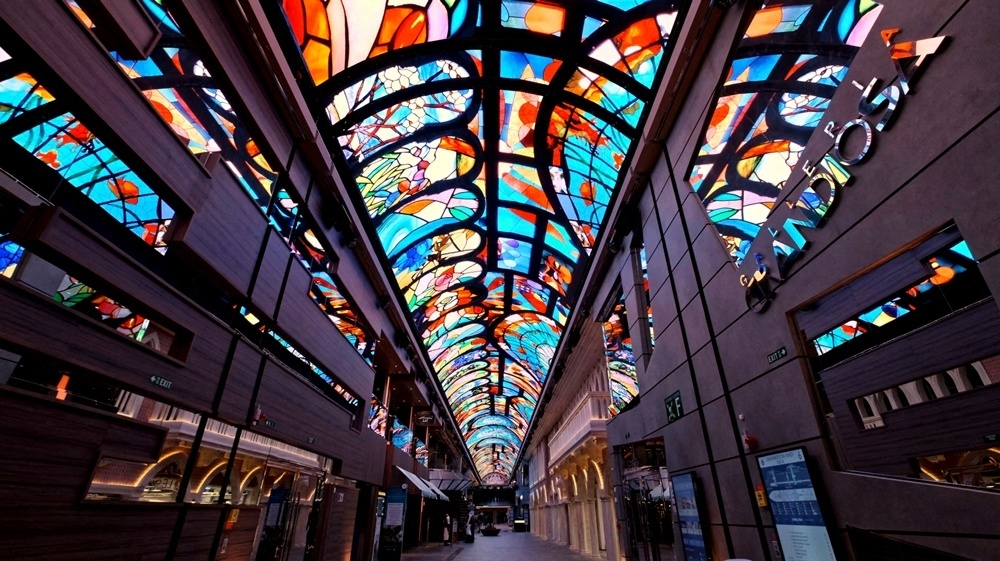 Measuring 580 square meters, Samsung’s curved LED signage is installed on the ceiling of the Galleria in MSC Cruises’ cruise ship, the MSC Grandiosa. Because the signage can be operated at all hours, it can provide passengers with various content based on the time of day. 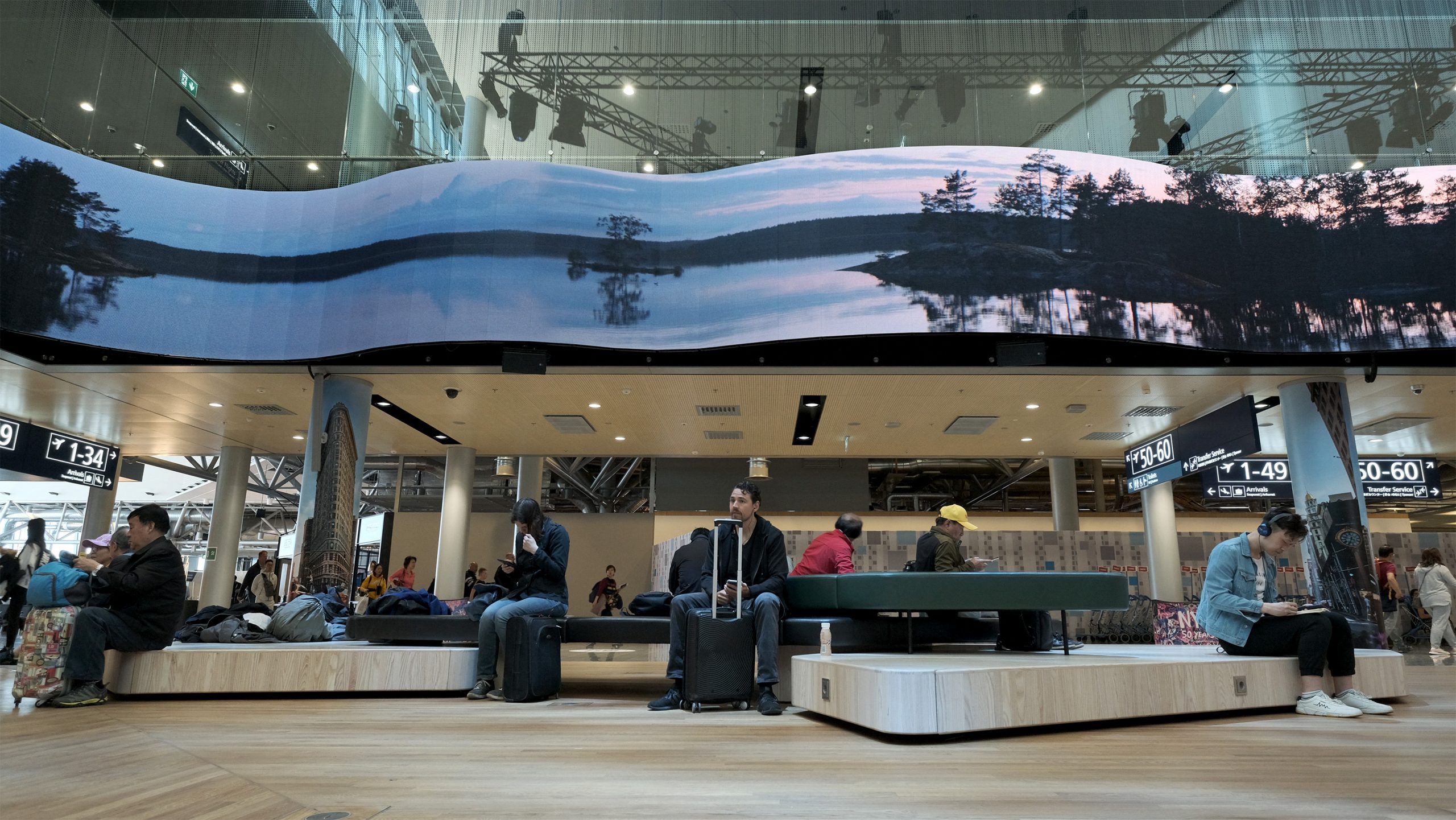 A total of 167 square meters of Samsung SMART LED Signage is installed in Finland’s Helsinki Airport. The S-shaped media wall features a 6000R curvature that emphasizes the beauty of waves. Onlookers can enjoy a wide range of natural sights curated by Finland’s tourism office, including picturesque snowy scenes and the awe-inspiring Northern Lights.

Enhancing the Atmosphere of Any Space

It’s important to select signage that suits the characteristics of a particular space. This is especially true for large complexes and resorts, including shopping malls and hotels, which tend to feature a wide range of colors.

Drawing from its wide-ranging product portfolio, Samsung delivered a customized indoor LED signage solution to Jeju Island’s Jeju Dream Tower in Korea. A large, circular media wall was installed in the tower’s second-floor lobby to create the impression that guests are being transported to a whole new world. In the hotel rooms, meanwhile, TVs and smart room solutions have been provided to help travelers relax and to amplify the hotel’s premium experience.

It’s important for indoor signage to present information with consistent brightness and colors. For semi-outdoor signage, which is displayed in places such as retail display windows and outdoor drive-throughs, the key is to display information clearly, even under bright sunlight.

In the U.S., drive-through sales at Smoothie King franchises have jumped from 70 to 90 percent during the pandemic. According to the company, part of the reason for this increase boils down to better business solutions enabled through signage. The pandemic has resulted in fewer one-on-one interactions with customers, making effective drive-through menu boards essential for revenue.

Smoothie King required a digitized business solution that would allow restaurant managers to make menu changes and localize promotions without having to wait to contact the franchise’s head office. Samsung’s semi-outdoor signage allowed them to innovate their operations by combining updated indoor and outdoor digital signage with remote management capabilities. This paved the way for more sales while demonstrating just how versatile Samsung signage has become.

Samsung signage is also becoming a common sight at subway stations, where displays relay information such as arrival times, transfer gates and more. Samsung has installed a total of 4,218 signage screens in 90 subway stations in Seoul, and has replaced many analog maps with 49 and 65-inch touchscreen displays.

The signage features IP5X-certified durability to withstand use in crowded subway stations, as well as an anti-reflective coating that enhances visibility. The displays allow subway passengers to enjoy a smarter commuting experience by presenting them with the information they need quickly and on a high-resolution screen. 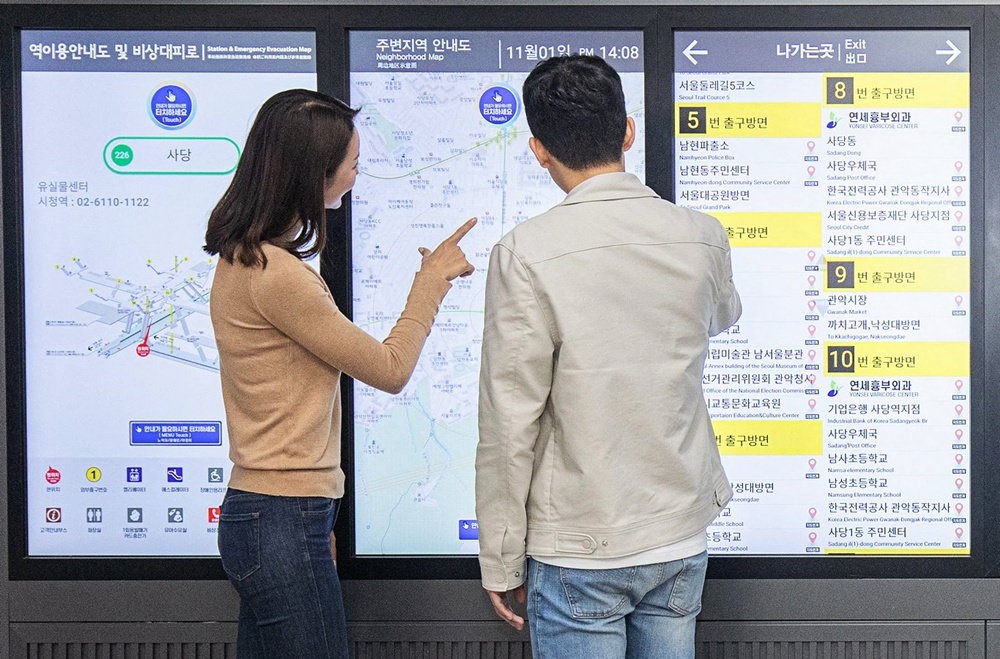 Samsung plans to strengthen its position as the world’s No. 1 signage manufacturer by advancing innovative technologies such as virtual production solutions. The company will utilize its state-of-the-art Micro LED, The Wall, to create an immersive and seemingly endless backdrop for capturing content. Because The Wall is modular, it can be easily installed in a variety of spaces. The virtual production studio solution will enable creators to connect LED displays to cameras to create richly detailed virtual settings in real-time.

Samsung’s recently announced partnership with Niio.Art, the world’s leading digital art platform, will offer businesses a stunning new way to engage with consumers. Transforming Samsung signage into an immersive digital canvas, the partnership will allow businesses to enhance their space with the very best in digital art. 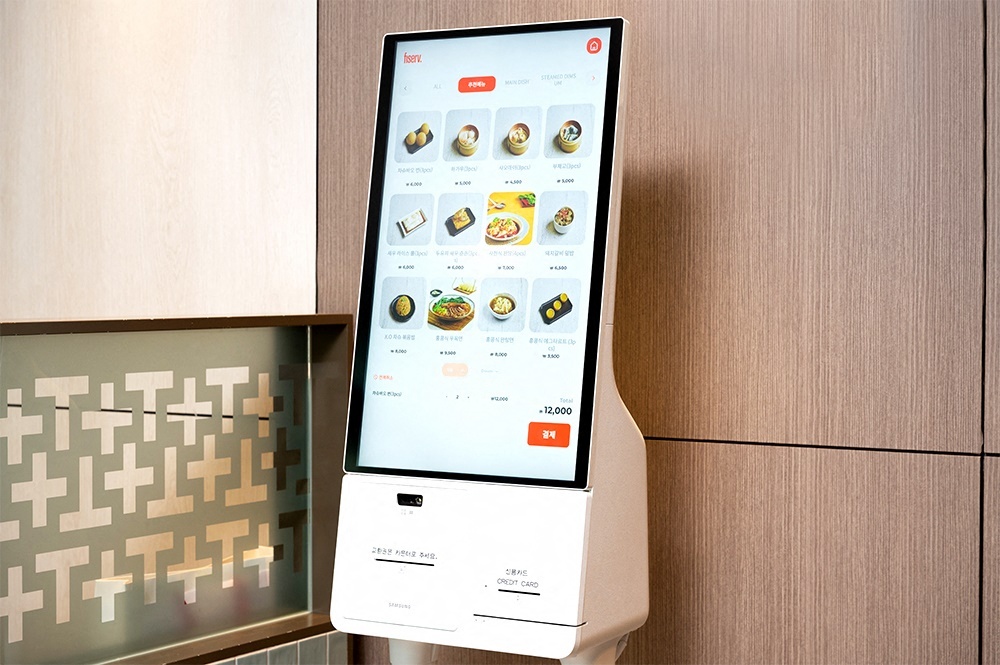 The Samsung Kiosk is another future-ready solution – one that is becoming increasingly more useful in an era of contactless consumer interactions. The technology offers an all-in-one solution for navigating menus, selecting items and making payments, and can be conveniently installed in restaurants, cafes, pharmacies, convenience stores, and more.

If you’d like to learn more about how Samsung is optimizing its digital signage solutions for future applications, be sure to check out Samsung VX 2021. This interactive virtual experience offers a 360-degree look at business solutions that are customized for various spaces, including broadcast studios, control rooms, and small to medium-sized businesses.

Stay tuned for more updates on how Samsung, the leader in this sector for the past 12 years, is shaping the future of digital signage.