Do Bigger Things with Samsung Galaxy Note8, the Next Level Note

RIDGEFIELD PARK, NJ – Aug. 23, 2017 –  Samsung Electronics Co., Ltd., introduces the Galaxy Note8, the next level Note for people who want to do bigger things. With Galaxy Note8, consumers get a bigger Infinity Display that fits comfortably in one hand, the S Pen to communicate in more personal ways and Samsung’s best-ever smartphone camera to capture stunning photos. The new Galaxy Note8 is designed for the way consumers lead their lives and lean on technology today.

“We appreciate the relentless passion of the Note community. They’ve been a constant inspiration to us, and we designed the new Note for them,” said DJ Koh, president of Mobile Communications Business, Samsung Electronics. “From the Infinity Display to the enhanced S Pen, to the powerful Dual Camera, Note8 lets people do things they never thought were possible.”

Samsung first introduced the Note series in 2011. Since then, a community of enthusiasts emerged through their affinity for Note’s signature expansive screen and S Pen. According to Samsung market research1, 85 percent of Note users say they’re proud to show off their Note and recommend it to friends, and 75 percent say it’s the best phone they’ve ever had.

Enjoy and Do More on the Infinity Display

The Galaxy Note8 has the biggest screen ever on a Note device, yet its narrow body makes it comfortable to hold in one hand. The 6.3-inch Quad HD+ Super AMOLED Infinity Display lets you see more and scroll less. The Galaxy Note8 gives you more room to watch, read and draw—making it the ultimate multitasking smartphone.

With Galaxy Note8, Samsung has made multitasking even easier with the new App Pair feature, which lets users create a custom pairing of most apps on the Edge panel that will simultaneously launch two apps in Multi Window mode. Watch a video while messaging your friends or dial into a conference call with the number and agenda in front of you2. 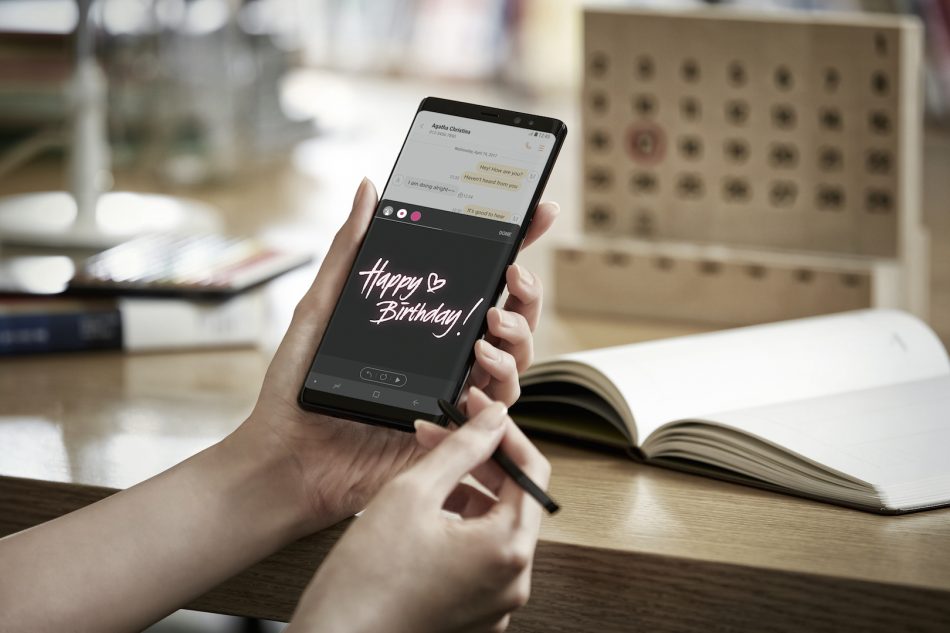 A New Way to Communicate with the S Pen

Since its introduction, the S Pen has been one of the Note’s defining features. With the new Note, the enhanced S Pen includes a finer tip and improved pressure sensitivity3, unlocking new ways to write, draw and interact with the phone and communicate with others.

When communicating via text just isn’t enough, Live Messages allows you to reflect your unique personality and creative vision. With Galaxy Note8, you can now handwrite a message, add special effects and share it as an animated GIF4 on several popular messaging and social apps. It’s a whole new way to communicate with the S Pen—adding lively and emotional connections that bring your messages to life.

The Always On Display allows you to stay on top of your notifications without unlocking your phone. With the new Galaxy Note8, it’s even more powerful. Screen off memo allows you to take notes as soon as you take out the S Pen. From there, you can pin a note to the Always On Display, edit them right there and write as many pages as you need—up to 100 pages.

For occasions when you travel abroad or come across a website in a foreign language, the improved Translate feature of the S Pen lets you hover over text to quickly translate not only individual words, but entire sentences, into 71 languages and instantly convert units and foreign currencies. 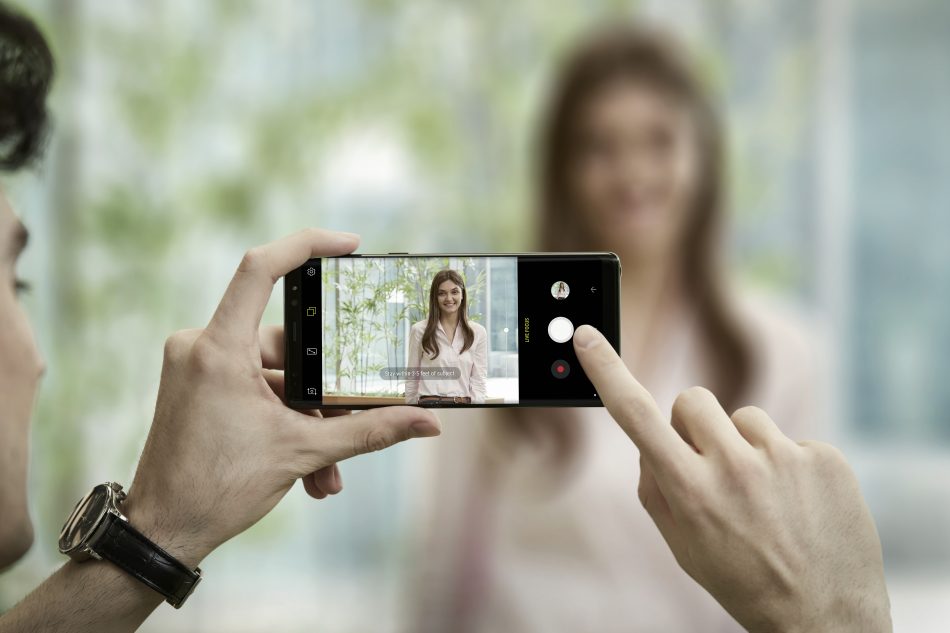 For most smartphone consumers, one of the things they look at in a new device is the camera. Samsung has set the standard for smartphone cameras, and with the Galaxy Note8 we’re delivering our most powerful camera yet.

The Galaxy Note8 is the first smartphone with two 12MP rear cameras with Optical Image Stabilization (OIS) on both the wide-angle and telephoto lenses. Whether you’re exploring a new city or running around your backyard, OIS lets you capture incredibly sharp images.

For more advanced photo taking, the Galaxy Note8 Live Focus feature lets you control the depth of field, unlike some other smartphone cameras, by allowing you to adjust the bokeh effect in preview mode and even after you take the photo.

In Dual Capture mode, both rear cameras take two pictures simultaneously—and you can keep both images: One close-up shot from the telephoto lens and one wide-angle shot that shows the entire background.

The wide-angle lens has a Dual Pixel sensor with rapid auto focus, so you can capture sharp and clear shots even in low-light environments. The Galaxy Note8 is also equipped with an 8MP Smart Auto Focus front-facing camera for sharp selfies and video chats.

A Full Galaxy of Features and Services

The Galaxy Note8 is built on the Galaxy legacy—a collection of unique features and capabilities that, together, have redefined the mobile experience: 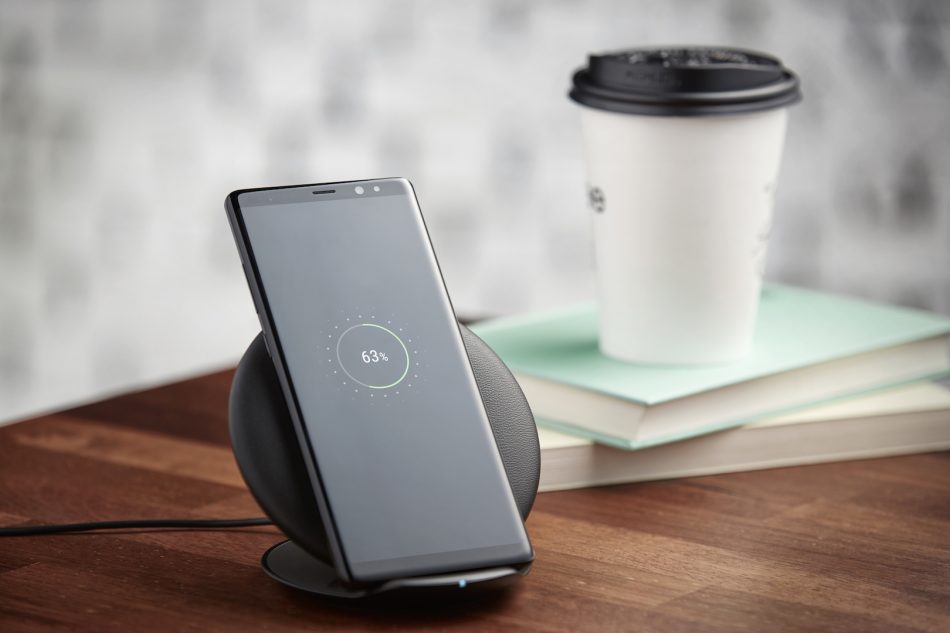 Mobile Performance, Productivity and Security for all Businesses

The Galaxy Note8 takes business innovation to the next level with features for performance, productivity and security for a wide range of industries, simplifying how work gets done:Enhanced S Pen for Business: The S Pen lets professionals discreetly take notes in Screen off memo or quickly annotate documents and photos.

Our Continued Commitment to Safety

“We have been closely working with Samsung to make meaningful advancements in the science of smartphone quality and safety evaluation. As a result, the Note8 has successfully completed a rigorous series of device and battery safety compatibility test protocols. We look forward to maintaining our strategic relationship with Samsung to help ensure device safety for all consumers,” said Sajeev Jesudas, President, UL International.

Consumers who purchase a Galaxy Note8 between August 24, 2017, and September 24, 2017, get their choice of a  free Samsung Gear 360 camera ($229.99 retail value) or a free Galaxy Foundation kit with Samsung 128GB EVO+ memory card and Fast Wireless Charging Convertible ($189.98 retail value)11. The promotion will last for a limited time and only while supplies last. Terms and conditions apply. Visit samsung.com/us/promotions for more information.

The Galaxy Note8 will also be compatible with the new Gear VR with Controller12, which will be available for pre-order starting August 24 at Samsung.com, Amazon.com and Best Buy, as well as AT&T, Sprint, Verizon and US Cellular. The new Gear VR with Controller will go on sale starting on September 15 for $129.99 at these retailers, plus T-Mobile and other select national retailers.

All functionality, features, specifications and other product information provided in this document including, but not limited to, the benefits, design, pricing, components, performance, availability, and capabilities of the product are subject to change without notice or obligation.

5 Water resistant in up to 5 feet of water for up to 30 minutes; rinse residue/dry after wet.

7 Knox is a mark for a Samsung device tested for security and is specifically configured with enterprise use in mind. For information about Samsung’s Knox device, please refer to www.samsung.com/us/knox.

11 Promotions are subject to change.

12 Gear VR with Controller and all other products and accessories sold separately.