Samsung Electronics of America announced today that Samsung QLED TV has been named the official television of the Los Angeles Rams. This announcement follows the recent news of Samsung and Hollywood Park’s multi-year partnership agreement to become the Official Mobile, TV and Display partner of Hollywood Park, a 298-acre sports and entertainment destination, inclusive of SoFi Stadium – the home of the Los Angeles Rams, and a 6,000-seat performance venue.

“In a time when being at SoFi Stadium in person is unfortunately not possible, there is no better way to experience Rams football than on a Super Big Samsung QLED TV,” stated Grace Dolan, VP, Home Entertainment Integrated Marketing, Samsung Electronics America. “With Samsung QLED becoming the official television of the Los Angeles Rams, it only further emphasizes our ongoing efforts to enhance the fan experience by bringing it home for Rams fans. With striking 4K picture quality, ultra-wide viewing angles and spectacular, vivid colors, Samsung QLED TVs bring all Rams football action right into your living room.”

The Samsung QLED / LA Rams partnership is comprised of the following activations:

“After working with Samsung to create the world’s most technologically-advanced stadium, we are teaming up to enhance the fan experience at home,” said Jason Griffiths, Los Angeles Rams VP of Partnership Sales.  “We are thrilled to partner with Samsung to bring fans closer to Rams football in unique ways all year round.” 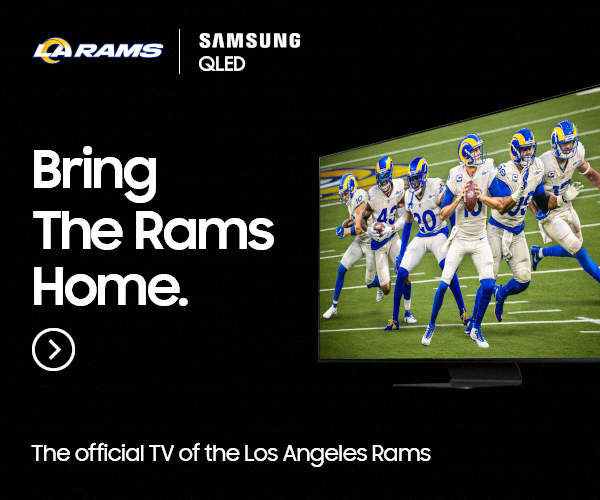