RIDGEFIELD PARK, NJ – September 1, 2017 – Samsung Electronics America Inc., the global leader in television for over 11 years, today announced an exclusive U.S. marketing and retail partnership with Xbox to utilize Samsung’s flagship premium lineup of QLED TVs as the official 4K TV partner for the highly-anticipated Xbox One X. The partnership kicked off at E3 2017 in June as attendees experienced, for the first time ever, true, breathtaking 4K HDR gaming on Xbox One X and Samsung QLED TVs.  Gamers will be able to experience the power of Xbox One X on QLED 4K TVs at various Xbox and Samsung marketing and retail activations throughout the US.  Consumers will also see a custom Samsung TV spot showcasing Xbox One X and QLED together that will run nationally around the launch of Xbox One X this fall. 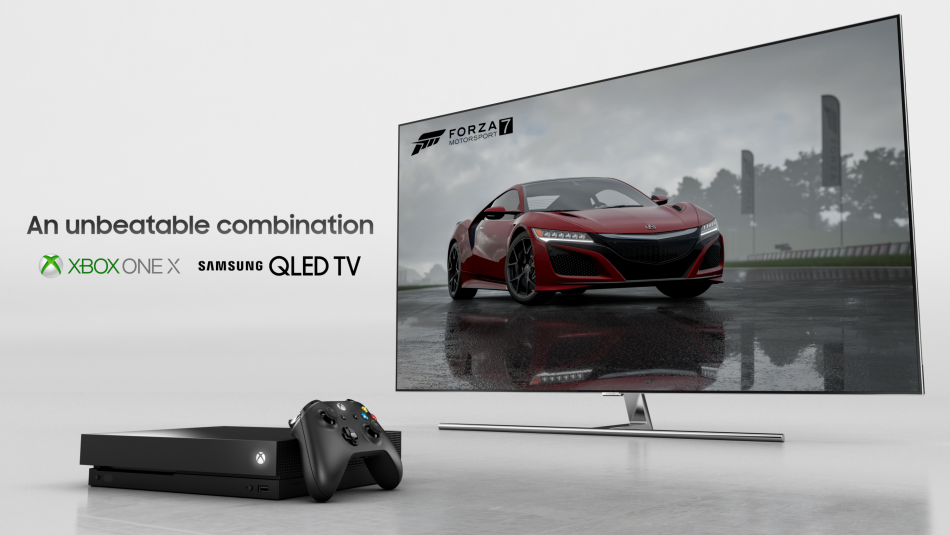 “The arrival of true 4K UHD gameplay on Xbox One X this Fall gives gamers the perfect reason to upgrade their television,” said Eddie Combs, Vice President of Marketing for Samsung Electronics America. “If gamers are looking for a TV that delivers premium 4K HDR picture quality with industry leading design and smart functionality, then the QLED TV and Xbox One X are an unbeatable 4K gaming combination.”

“Xbox One X will bring true 4K gaming to console players for the first time with 40 percent more power than any other console,” said Mike Nichols, Corporate Vice President and Chief Marketing Officer, Xbox. “Samsung’s QLED 4K TV is our favorite way to play Xbox One X, and we’re thrilled to join forces with Samsung in the U.S. to deliver immersive 4K gaming experiences to our fans.”

Samsung’s QLED TV takes Quantum dot technology to the next level with advancements in light efficiency, stability and a wider color spectrum. The QLED TV can express accurate color and achieve 100 percent color volume – addition, the QLED TV’s 4K HDR Elite features rich, deep black levels and bold contrast that displays hidden detail as it was meant to be seen.

For gamers, the QLED TV provides an unparalleled 4K HDR gaming experience. It leverages Quantum Dot technology to bring even the smallest graphical details to life in perfect color. And with 3-step image processing, the QLED TV features an exceptionally low input lag of less than 20 milliseconds to provide a seamless experience on even the most demanding multiplayer games. Meanwhile, a lifetime guarantee against burn-in means that gamers will never have to worry about potential display damage that could distract them from the next mission.

Samsung’s Smart Hub has been expanded to offer an even more intuitive and unified experience, directly via the QLED TV. By simply connecting Xbox One X, the TV automatically recognizes the console and sets up the Samsung One Remote – which now supports more devices and offers voice control capabilities across more Smart TV features. Just by saying “Game Mode” into the One Remote, users will have immediately optimized their audio and video settings for gaming. Paired with the latest Smart View App – available on Android or iOS mobile devices – users will enjoy their very own personalized Smart Hub.

Additionally, Samsung introduced new design elements that can fit into any home – regardless of the interior aesthetics or setup. The all-new Invisible Connection cable allows placement of the console elsewhere, with a single connection to the TV. Consumers can now reclaim their living room space once occupied by set-top boxes, external streaming devices and video game consoles with a single optical cable that brings all devices together in a clean, orderly manner. Additionally, Samsung has also introduced the No Gap Wall-mount which brings the TV flush against the wall, closer than ever before.

Samsung’s 2017 QLED TV lineup is available now at Samsung.com and at retailers nationwide.

[1] **In the event of burn-in from normal consumer use, Samsung Customer Service (1-800-726-7864) will either repair or replace at its option the 2017 QLED TV with a similar model. This guarantee requires valid serial number, valid picture proof of burn-in, and product registration on Samsung.com starting from May 1st, 2017. Does not cover fraudulent claims or claims of burn-in resulting from negligence or improper use of TV. Repair or replacement typically occurs within 2-3 weeks but could take longer.