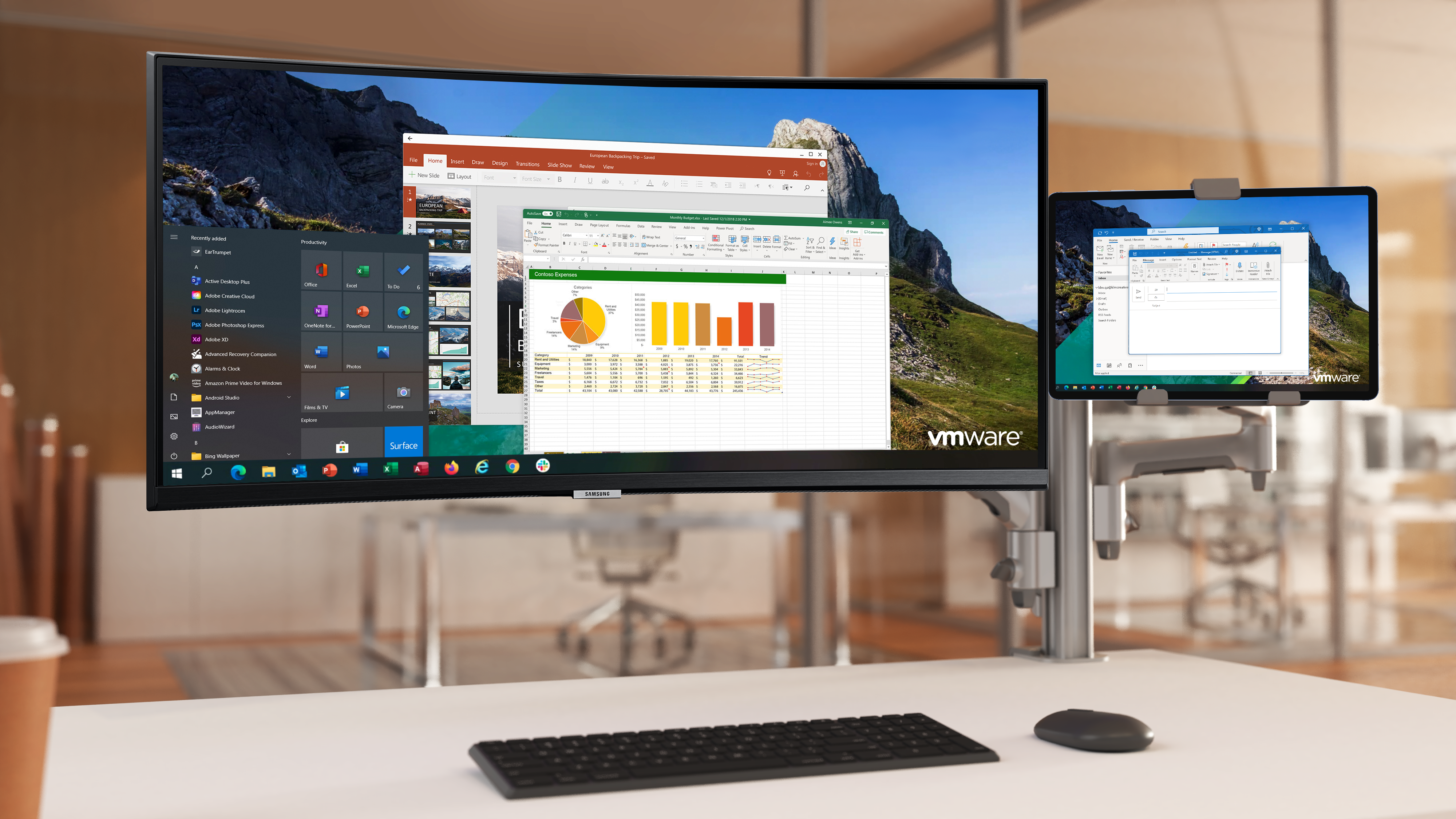 Samsung DeX has long been prized by users because of its ability to create a “desktop PC-like” experience. With this new innovation from VMware and Samsung, enterprise users will be able to experience the same Windows PC environment they use at work or home leveraging their Galaxy tablet or smartphone, when connected to an external display.

Integrated into the latest version of VMware’s Horizon client application, Horizon on Samsung DeX supports multiple use cases: Users can see a virtualized Windows desktop environment on the external display while continuing to use the Galaxy smartphone or tablet’s own Android apps and content, or extend the Windows desktop across both displays, using the same mouse cursor to move from one display to the other.

Horizon client uses Samsung’s DeX Dual Mode and input APIs to combine separate interfaces and input technologies to an integrated experience. Beyond enabling Galaxy users to use mouse-controlled Windows apps on an as-needed basis, Horizon on Samsung DeX can facilitate dual-screen work scenarios where employees utilize a monitor for PC apps while the Samsung device’s touchscreen allows the customer to use a finger or S Pen stylus.  For example, a financial advisor could look at market data on a large monitor, while their client holds a Samsung Galaxy Tab S8 series to follow along, approve transactions, and sign documents.

“Samsung DeX has increased business productivity for years, and we’ve listened to customers who asked us to take Samsung DeX to the next level,” said Ray Couey, National Director of Strategic Alliances, Samsung Electronics America. “The latest version of Samsung DeX empowered VMware to utilize the second screen for an experience Galaxy Tab S series and smartphone users have been craving. Horizon on Samsung DeX gives users the unmatched ability to carry powerful, power-efficient Android devices anywhere, while accessing their Windows PC desktop work environments as necessary – and without compromise.”

Horizon on Samsung DeX is backed by Samsung’s Knox enterprise-grade security and VMware’s Workspace ONE virtualization technologies, offering businesses an ideal combination of simplified deployment with control over both apps and data. In highly regulated sectors, including finance, healthcare and government, Horizon on Samsung DeX delivers a secure desktop environment that keeps sensitive data from residing permanently on client devices. Regardless of their industries, all users get the benefit of instant remote access to a full PC desktop combined with the portable power and versatility of true mobility.

For end users, using Horizon on Samsung DeX is as easy as connecting a supported Samsung Galaxy smartphone or tablet to a USB-C monitor, loading VMware’s Horizon client, and using their existing Horizon credentials. Users can choose from wired or Bluetooth wireless keyboard and mouse devices to suit their specific use cases. For IT teams, adding a new user takes only minutes using VMware’s architecture, making onboarding as fast and simple as delivering a new Galaxy device.