The 9,699 square foot Chase Center LED centerhung, built by Samsung, has made its way to the spotlight once again, as basketball fans around the world tune in to the exciting conclusion of the championship series. The massive video board made waves for its size in its 2019 debut with the venue’s grand opening as the largest centerhung display in the NBA. The centerhung, along with other Samsung-built LED displays implemented throughout the high-tech arena, has transformed the fan experience, bringing new excitement to gameday. 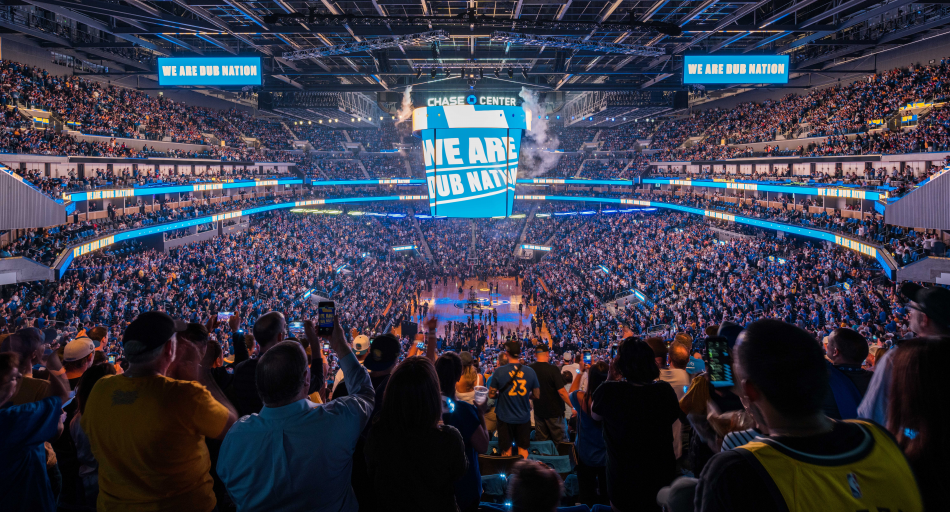 This HDR scoreboard dazzles with first-in-class innovation and an unmatched size. The additional 9,699 square feet of video display spread across 15 displays keeps fans immersed in the action, no matter where they are in the arena. An incredible 6.7mm pixel pitch on the main displays with an upper halo ring and 4mm pixel pitch on the underbelly displays bring together 26.3 million individual LEDs to create picture-perfect images.

“It is only fitting that the largest scoreboard in professional basketball be present at the biggest games of the season,” said Harry Patz Jr., Senior Vice President and General Manager, Display Division, Samsung Electronics America. “This exciting occasion highlights the power of digital transformation, bringing newfound value to our incredible partnership with Chase Center and the Golden State Warriors.”

Rich colors and crisp visuals matched with vibrant content, bring gameplay to life like never before. With more of Samsung’s impressive LED portfolio found throughout the venue, visitors have come to expect a seamless integration. Fans won’t ever have to worry about missing that highlight worthy three-pointer or dunk when they leave their seats because of Samsung’s sixty-four displays, helping the venue deliver uninterrupted visuals and top-notch quality and service. Samsung helps fans stay connected to the game, so they never miss a beat of the heart-pumping action of the highest stakes professional basketball series of the year, including from outside the arena. Samsung’s 10mm weather-proof display outside the west entrance was notably the first-ever full outdoor LED video display in the Bay Area’s history, a representation of the high-tech experience to come for visitors.

Samsung is dedicated to transforming sports and live event arenas through groundbreaking LED installations, delivering the best service from conception to installation. Making an appearance alongside the Golden State Warriors as they duke it out for the title of series champion, the centerhung LED will light up the remaining games, helping Chase Center continue as a leader in technological innovation.