Seoul, Korea – February 9, 2017 – Samsung Electronics today announced that its 2017 QLED TV, first unveiled at CES 2017, has received verification from world-class testing and certification association, Verband Deutscher Elektrotechniker (VDE), for its ability to produce 100 percent color volume. VDE provided verification for Samsung’s QLED TV based on the organization’s expertise in color volume testing. The verification is a mark of the QLED TV’s ability to provide a consistently high quality picture to viewers. 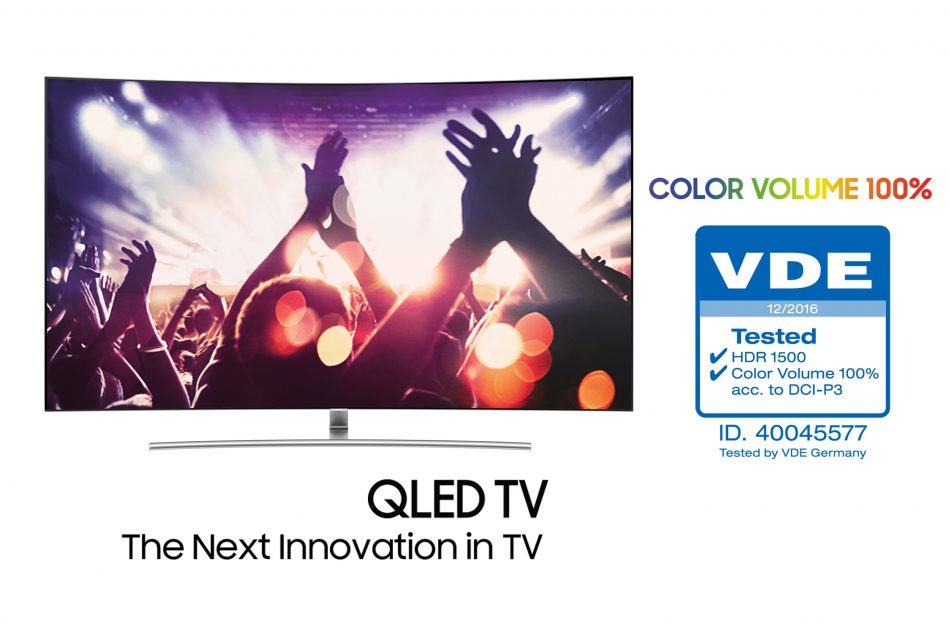 ‘100 percent color volume’ presents color that can be expressed regardless of the different levels of brightness. For example, a leaf can be perceived as different colors, from yellowish green to turquoise, depending on the brightness of the light. The Samsung QLED TV can capture even the subtlest differences in color pertaining to brightness – something that is not easily depicted in traditional 2D color space – thus deliver the most true HDR picture quality as the director intended..

Generally, a TV’s color-rendering capabilities diminish as brightness levels go up, leading to color distortion on-screen. The Samsung QLED TV overcomes the trade-off between brightness level and color. With a peak brightness of 1,500 to 2,000nit, the QLED TV can express 100 percent color volume – a TV industry first.

Samsung’s QLED TV uses a new metal Quantum Dot material – making it possible for the TV to express a significantly improved range of color and peak brightness with much greater detail compared to conventional TVs. The new Quantum dots also allow the Samsung QLED TV to express deep blacks regardless of how light or dark the scene is, or whether the content is played in a brightly lit or dark room. Best of all, QLED delivers this level of performance no matter where the viewer is sitting, offering consistent color and quality from any viewing angle.

“The ‘100 percent color volume’ verification awarded to Samsung’s QLED TV signifies the excellence of our product and its revolutionary picture quality. As the global TV market leader for 11 consecutive years, we are thrilled to be leading the TV industry into a world of Quantum dot-powered displays featuring the best available picture quality,” said JongHee Han, Executive Vice President of the Visual Display Business at Samsung Electronics.