Starving out Hunger: Students Use STEM to Fight Food Insecurity

In a society that asks young adults who they aspire to be, Thomas O’Neill, Educator at Butler Tech Ross High School and Board President of JEE Foods, encourages students to start making a significant impact at an early age. As an information technology (IT) instructor for over 20 years, his purpose when teaching at a high school level is never to hear the question, “What am I ever going to use this for?” This goal led to hands-on learning experiences that challenged students to create impressive solutions to global problems.

JEE Foods, launched in a Butler Tech Ross High School IT classroom back in 2017, is a nonprofit organization utilizing food rescue to solve poverty and hunger in Hamilton, Ohio. This ambitious group of students was looking to compete in Samsung’s Solve for Tomorrow Challenge, a program designed to demonstrate how young leaders can utilize STEM (science, technology, engineering and math) to improve their communities. In trying to tackle the United Nations Sustainable Development Goals one and two, no poverty and zero hunger, this team of visionaries went above and beyond to change the lives of many.

Upon collaborating with a school from South Korea, the students recognized three areas largely contributing to these ongoing issues: lack of jobs, education, and economic resources. These components became the driving force behind the company name and the transformation of a school project to a fully functioning 501 (c)(3) Organization.

As an entirely student-run company, they are responsible for all aspects of the business, from partnerships to production to promotion. After reaching out to local farms and gardens, national grocery stores and major food chains, a lot of hard work follows the accumulation of inventory. They reprocess donated products to increase shelf life using unique recipes. From dehydrating and packaging to flash freezing and vacuum packaging, these entrepreneurs maintain the food’s nutritional value and eliminate excess waste.

With over 5.4 million pounds of food distributed to serve over 805,000 community members, these students have been able to see the impact of their hard work directly. Tom explained, “We can talk statistics all day long, but when you can actually see how much food is wasted, that is an eye-opening, staggering thing to see.” 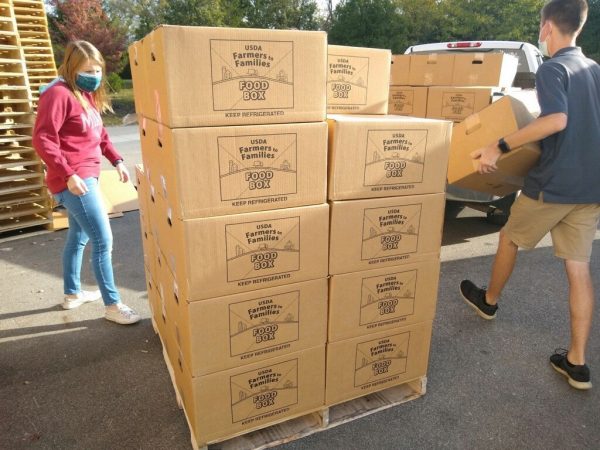 Members of JEE Foods continue reaching as they seek to do more for their community and the environment at large. They explained, “If food waste were a country, it would be the third-largest greenhouse gas emitter in the world.” This realization prompted a new mission to preserve their planet, having already saved nearly 2.9 million pounds of CO2 emissions. The employees have learned how to distribute the food without increasing their Carbon Footprint through brainstorming more efficient production and distribution strategies. In addition to their current actions, they are aiming to become a carbon-neutral organization by 2025.

“That comes from our work with the Sustainable Goals,” Tom said. “It shows them the problems in the world, and they want to see what they can do about it.” This work did not go unnoticed as they continued to grow in size and spirit. Resulting from their outstanding participation in Samsung’s Solve for Tomorrow, the founders of JEE Foods have been provided three opportunities to present their findings and strategies at the United Nations.

As the students continued to put their new ideas into action, Tom explained how the program changed each individual’s mindset. He said, “Their priorities change. Their social life becomes less important than figuring out how to help people.” The experience of turning JEE Foods into a functional business has allowed multiple students to develop new passions, sharpen their skillsets, and find meaning at such an early stage in their lives.

From an educator’s point of view, Tom believes that his role is to be a mentor and facilitator rather than a lecturer. In explaining what makes Solve for Tomorrow unique, he said, “Solve for Tomorrow is one of the only programs that specifically use STEM to solve problems. It provides a platform for students to look at problems that don’t only affect them, but their communities as well, in a different way.”

If you are interested in learning more or being a part of Samsung’s Solve for Tomorrow STEM competition, apply here by November 8, 2021.

Samsung Partners with NEEF for the 2021 Climate Superstars Challenge