The user’s enjoyment of their viewing experience is one of the key drivers in the advancement of display technologies. While many developers work simply for the ‘ideal’ picture quality, Samsung’s Neo QLED TV developers have also put in the utmost efforts to develop optimized displays for users that go above and beyond of what a display can be.

In order to understand more about how those innovative features of the Neo QLED transcend technological hurdles to meet user’s growing demands for next-level quality displays, Samsung sat down with the next-generation TV developers to find out more. 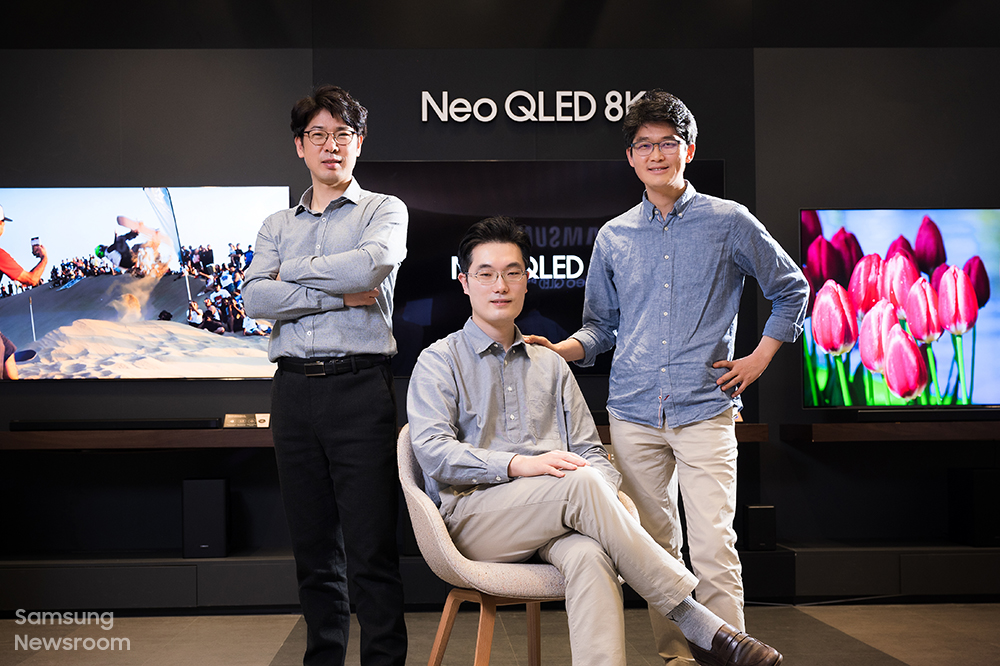 ▲ (From left to right) Engineers Bonggeun Lee, Kyehoon Lee, and Minhoon Lee from the Visual Display Business at Samsung Electronics

The Beginning of QLED: the Quantum Mini LED

The culmination of a range of leading innovations, the journey to developing the Neo QLED began with the creation of the Quantum Mini LED, a light source just 1/40th the height of conventional LEDs. Samsung’s engineers managed to reduce the size of the LED down to almost that of a dust particle, and applied a micro layer that softly disperses light into the LED itself, allowing the chip to emit and disperse light on its own. The resulting self-emitting LED removes the noise possessed by previous technologies and enables the era of natural, smooth display presentation.

“In those TVs that utilize the typical LEDs, there is an additional lens that has to sit on top of the LED so that the light can be dispersed, so our focus for our new LED product was on allowing it to disperse light independently,” noted Engineer Minhoon Lee. “Not only is the Quantum Mini LED smaller and more space-effective than its predecessors, but it also does not require the extra lens layer, allowing us to align more LEDs together in a more compact manner.” 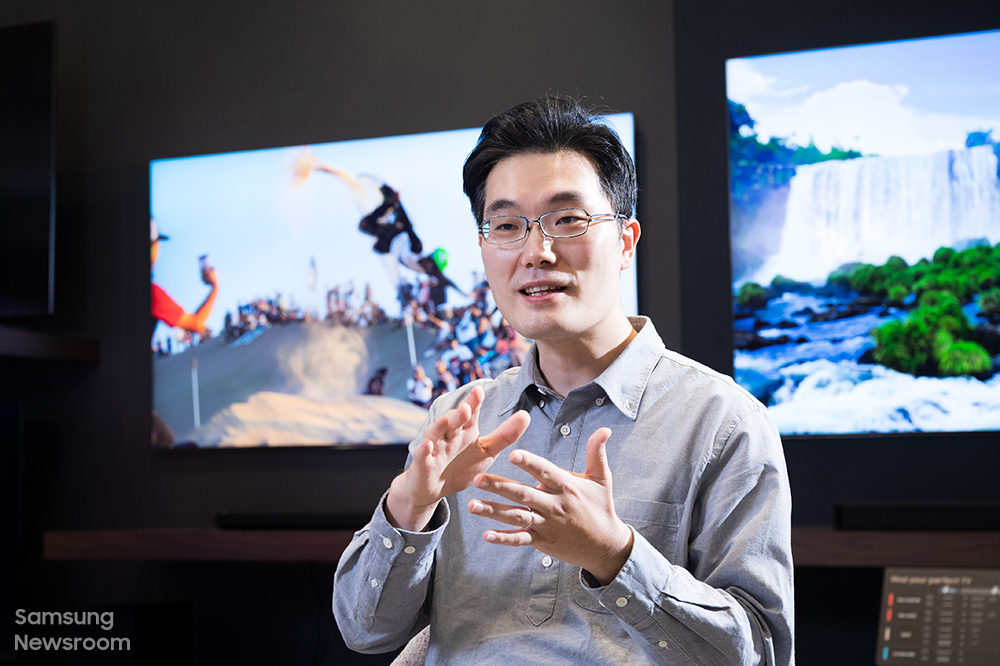 As the Quantum Mini LED is just 1/40th the height of previous LEDs, the engineers encountered many hurdles in the production process. There was not enough equipment available to work with these new LEDs that were of such a minute size, and the production process was inevitably intricate and tricky. “Not only is the Quantum Mini LED small, but we also needed to ascertain the accurate location of where electricity enters the LED in order to align the tens of thousands of elements around it,” said Engineer Kyehoon Lee. “This meant that expertise and advanced technologies became key. Samsung already has the know-how when it comes to developing next-generation displays, including micro LED products, so we could address this issue by applying existing Samsung processes that deal specifically with microfine elements.” 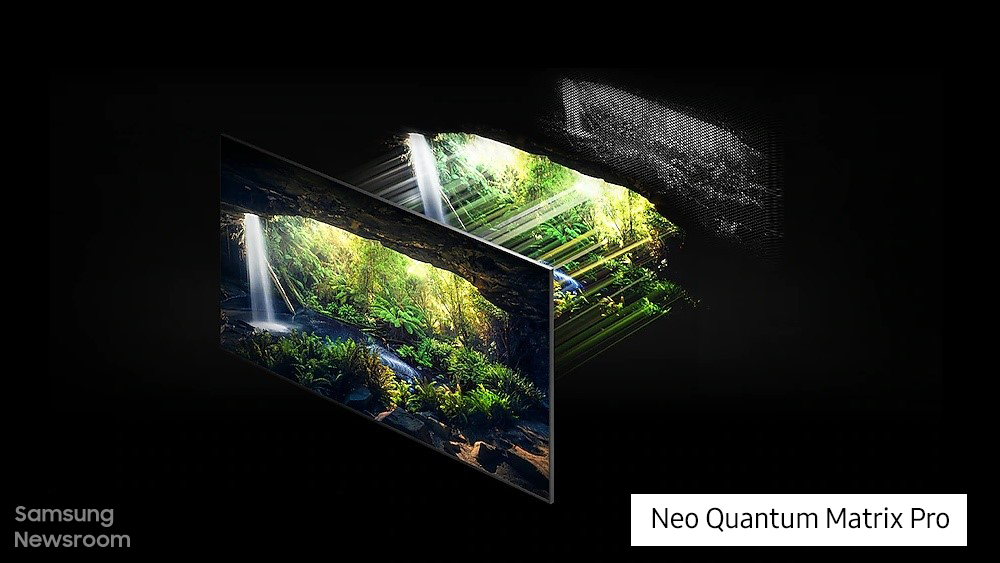 Local dimming is a technology that enables better picture quality by optimizing the brightness appropriately and dimming or brightening parts of the screen that respectively need to be adjusted through distinguishing the screen backlights into multiple zones. Increasing the on-screen contrast not only provides life-like watching experiences but it also significantly reduces the amount of electricity used. Samsung has championed local dimming technology for a long time and has been able to improve and advance this technology through dedicated research and development efforts. As a result, the Neo QLEDs feature an evolved and optimized local dimming technology – Quantum Matrix.

However, if the lens that is used to disperse the light on top of an LED is removed and the backlights are exposed, wouldn’t this result in users being able to notice the changes in brightness and contrast happening? The engineers had already considered this, and tackled this obstacle by including even more precise adjustment into the Quantum Matrix’s processes.

Neo QLED increases the luminance scale to 12-bit with 4,096 steps. When the light level on-screen is not detailed enough, it can result in an impression of lag or freezing, and the light could be absorbed by nearby local blocks. However, Quantum Matrix technology is able to express a colour at dozens of different levels without any glitching and present it with no blooming. If you enjoy playing games on your TV, for example, you will be able to easily distinguish a foe in a dark cave with your own eyes. 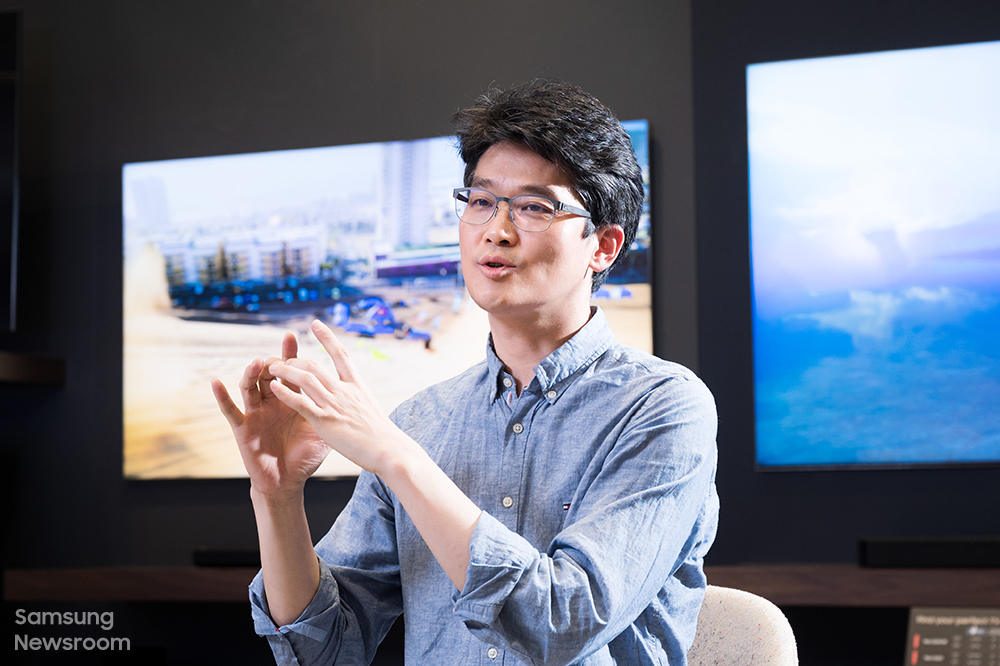 “The range of brightness that the human eye can see is called the dynamic range,” noted Minhoon Lee. “When it comes to Quantum Matrix, the light can be adjusted within a 4,096 level range, meaning that this dynamic range has also been maximized.”

“The human eye is very sensitive, so we are helping each colour to play its own role and show itself as it is instead of getting mixed up with other ones,” continued Minhoon Lee. “In addition, Quantum Matrix technology brings the extra electricity that isn’t being used in darker parts of the screen to the brighter parts so that the concentration is maximized. With this technology, we’ve achieved brightness of up to 4,000 nits[1] with the Neo QLED.”

Quantum Matrix technology not only precisely controls all those Quantum Mini LEDs, but it also controls the light source for each individual content. “This technology works by analyzing the content source being played so that users can enjoy even more vivid, realistic experiences,” noted Engineer Bonggeun Lee. “For instance, if there is a scene on-screen that requires a maximized sense of dimension, the technology will provide a sense of depth by focusing the light on the object that is at the front while darkening the background. It is a completely different technology from something as simple as lights that just turn on and off.”

When it comes to enjoying an immersive viewing experience, content picture quality is just as important as a next-level display. In order to ensure that users can enjoy high-quality content even if the original source is of a lower resolution, and regardless of local internet speed, Samsung’s engineers developed a picture quality engine to automatically convert any content to an optimized picture quality – the advanced AI-powered Neo Quantum Processor. 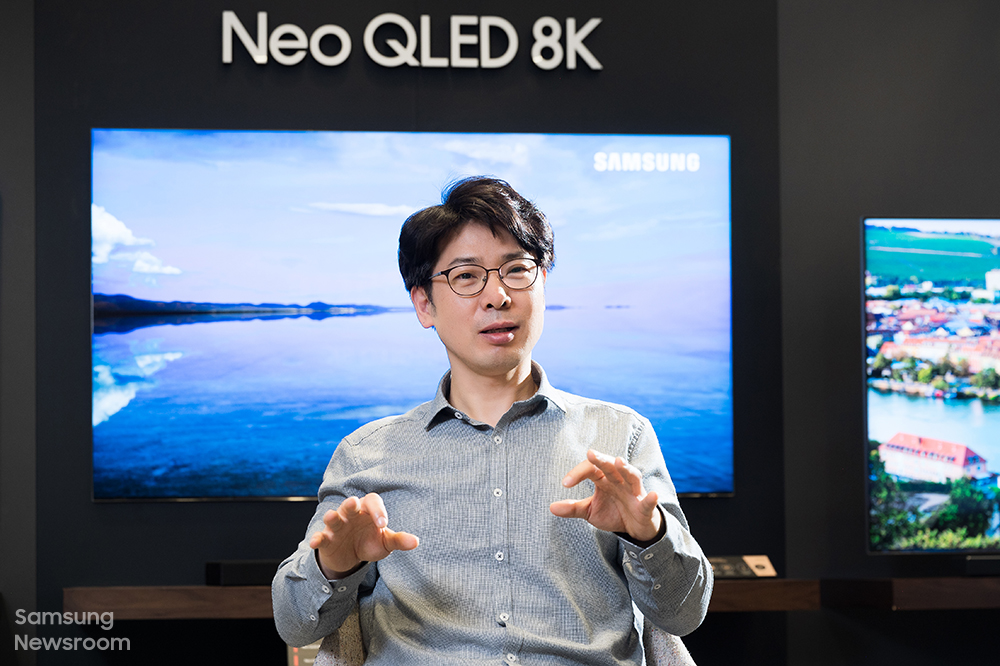 The innovation key to the Neo Quantum Processor’s high performance is that its neural network has been increased from 1 to 16. This allows the processor to map different contents by their type, significantly enhancing its upscaling capability[2]. “The Neo Quantum Processor works like this: the selected video’s attributes will be analyzed in real-time by the processor, and then the most optimized neural network out of the 16 available will be applied for the best possible upscaling result,” explained Bonggeun Lee. “This means that each one of the 16 neural networks is capable of playing a different role so that the processor can perform even more detailed upscaling.”

The processor’s method of filling the gaps between low-resolution and high-resolution contents has also become more precise. If the gap between the pixels is widened, then simply copying and pasting the same pixel repeatedly will make the video unclear and blurry. With the Neo Quantum Processor, the correlation is constantly analyzed through neural network learning and the change between pixels is estimated to fill in the gap between pixels in a way that is as close to reality as possible. This allows for a pattern to be analyzed in real-time and the best possible upscaling solution to be applied to the content, regardless of the resolution of the input video (be it SD, HD, FHD or 4K). 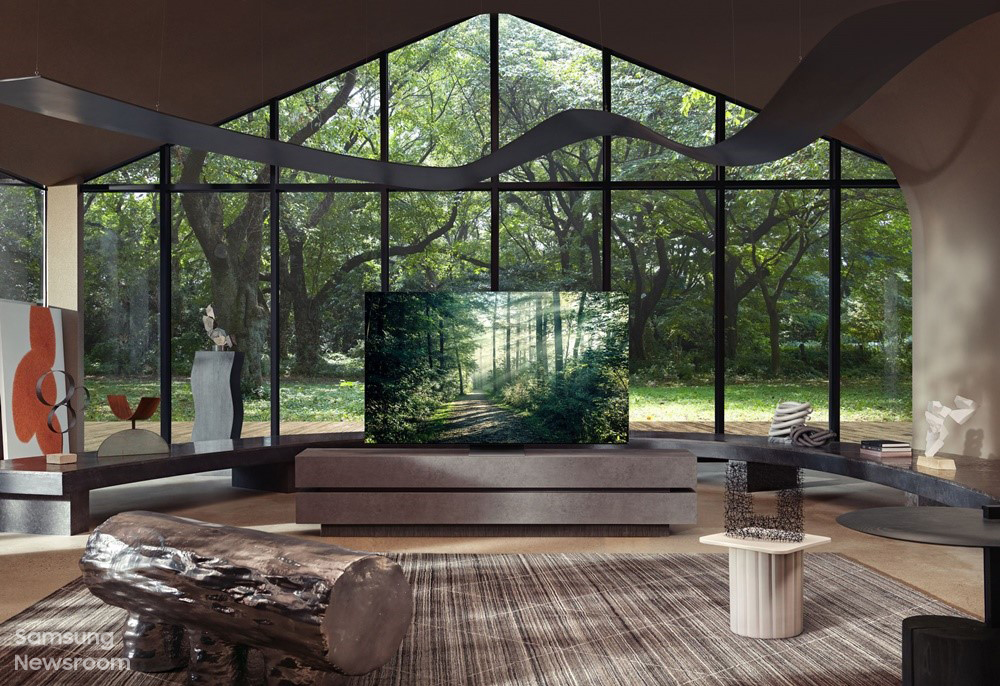 Samsung’s TVs have been number one in the global market for 15 consecutive years[3]. This achievement illustrates the synergy between the different innovations the company develops for each of its products, and how they work together to consistently provide the viewing experiences that users expect. The Neo QLED, a TV in a whole new league of its own, was made possible only due to the company’s existing work into developing advanced display technologies.

“Neo QLED isn’t simply a display made out of small LEDs,” highlighted Engineer Kyehoon Lee. “From including small yet effective elements to developing precise screen control, there are so many different technologies that have converged in the Neo QLED to bring beautiful display screen experiences to users. We’re very excited to see how our team’s efforts in research and development over the years have finally led to such an achievement in display technology.” 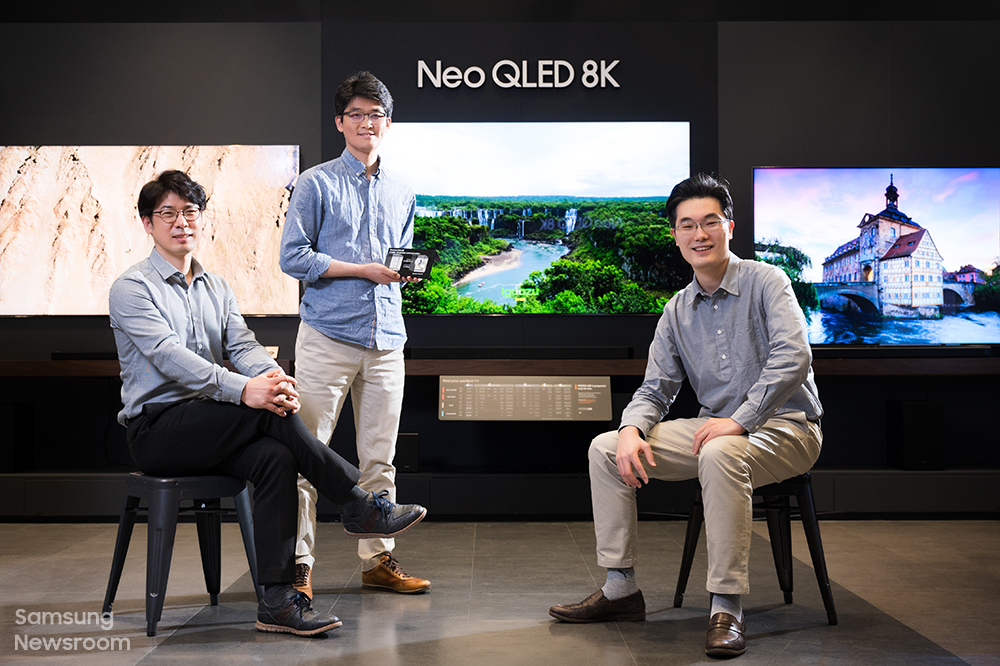 Each year, the trends within the display business change. When developing the Neo QLED, all the engineers agreed that the trend they paid the most attention to was “the bigger, the better”. Out of the many factors that users consider when purchasing a TV, size is always at the top of the list. The engineers expect that the market is set to move forward with this mindset, too.

“In the past, some people felt uncomfortable with large-screen TVs, as they wouldn’t be able to see all the pixels on-screen vividly and this led to visual discomfort,” noted Bonggeun Lee. “However, Neo QLED is a TV that has reached the technological level that allows for satisfying viewing experiences across the board. In line with the leading trends within the TV market that prioritize ultra-large screens, we will continue to work towards realizing the perfect picture quality on a large screen.”

Samsung’s Neo QLED, which presents its contents to users as if it were actually right there in front of their eyes, has been realized with the aim of opening up a new era for displays. Following this, it won’t be long until we can all enjoy next-level viewing experiences right in our own living rooms.

[1] Maximum brightness may vary by model.

[2] 8K / 4K AI Upscaling enhances content to near-8K / near-4K picture quality. Based on laboratory testing. Viewing experience may vary according to types of content and format.

[3] Source – Omdia, TV Sets Intelligence Service, Jan-2021. Ranking in terms of unit shipments for 15 years consecutive years ending 2020. Results are not an endorsement of Samsung. Any reliance on these results is at the third-party’s own risk.