Samsung has the rare capacity to execute the entire building process of a TV in-house – from developing new concepts to making panels to producing artistic designs to manufacturing the end product. This allows us to conduct innovative activities internally, and by bringing together top-class panel and manufacturing technologies create and industry-leading designers, we infuse each unit we make with magic. Today, we’d like to share a brief history of how the design of Samsung TVs has evolved. 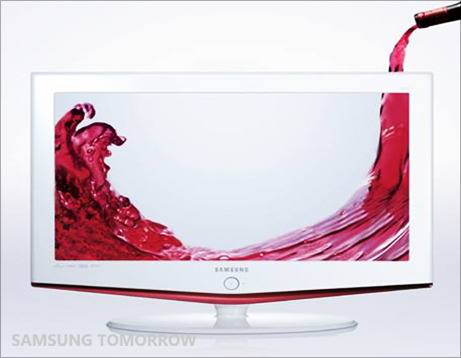 In 2006, Samsung introduced the Bordeaux, one of Samsung’s most famous television models. The Bordeaux series consisted of crystal wine glass-inspired LCD TVs that captured the attention of high-end consumers worldwide. With its 360-degree design, the Bordeaux showcased the TV’s alluring construction from any viewing angle.

The minimal and classy look of the Bordeaux series turned it into hit product. In the first six months, Samsung sold more than one million units and went on to eventually sell more than three million. This success in the premium product category raised the Samsung design and brand image to new heights. The Bordeaux was so influential that it shifted the TV industry away from the conventional square TV design and brought about several followers. The Bordeaux series truly changed the trend of TV design. 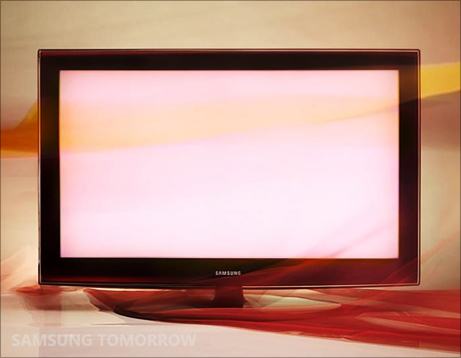 In 2008, while competitors pursued the Samsung-inspired glossy black look of TV design, Samsung introduced Touch of Color (a.k.a “Crystal Design” in Europe, CIS and China.). Three elements contributed to the design concept of ToC which was first inspired by the beauty of the sunset.

First, a crystal clear bezel with thick transparent texture created a “crystal silhouette” effect.  Second, sophisticated hues were achieved through Samsung’s dual injection technology. Simply, the bezel was formed by a machine with two independent injection units, each of which injected different materials. By controlling the density of the transparent and opaque materials, Samsung developed a unique processing method now referred to as Transparent Opaque Color.  ToC was designed to invoke a sense of artistic handcraft, a piece of crystal artwork that could be seen differently according to the brightness of an environment and users’ viewing angles. 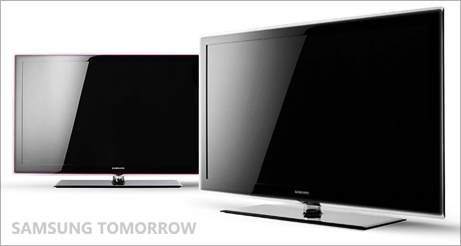 One year later, Samsung created an entirely new category – Light Emitting Diode (LED), a new technology that converts electric energy directly into light, showing a dramatic improvement in contrast and color rendering. Inspirations for the liquid crystal screen included the transparency and purity of water, a single piece of thin crystal, and the natural color gradation effect of ink.

In the B7000 Series led to the emergence of a new keyword – “Finger slim” – that described the slimness and lightness of the product. “Finger Slim” also led to Samsung’s development of a unique mounting system to complement the device’s thinness. Like a piece of art framed on the wall, the system reduced the space between the wall and the TV by 35 millimeters. 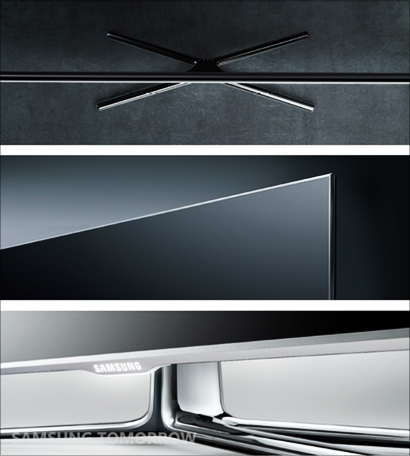 A recent major characteristic in Samsung TVs is the change from “TVs that are viewed” to “TVs that are enjoyed.” The company’s vision centers on the belief that digital technologies exist to realize values sought after by people.

Samsung’s Smart TV is totally different than conventional models. It becomes one with the space around it, beautifully designed to blend into its environment. This design concept is referred to as “One Design.”

The distinction between the TV and background appears to be only that of a single line, delivering a premium natural quality. This is the core feature of Samsung’s new minimalistic TV product design, and we’ll be talking more about this next week.

This is the first of the ‘One Design’ Series. We would like to share our inspiration, technology and design in the following posts.