Back in 2010, when the first generation of Samsung’s flagship smartphone, Galaxy S, was introduced, it had five sensors.  Four years later, Samsung Galaxy S5 doubled that number to ten: the ‘Temperature/Humidity sensor’ has been replaced from the Galaxy S4, but the Finger Scanner and Heart Rate Sensor have been added. 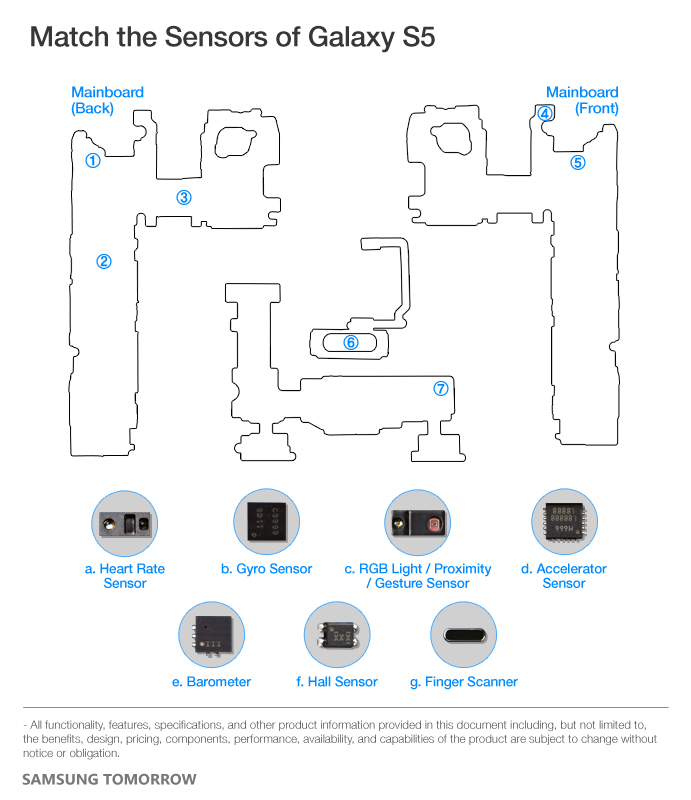 The image above indicates the sensors used in the Galaxy S5 and their location on the mainboard in a randomly mixed order. Why? Since the article is dedicated to sensors of the Galaxy S4, we figured you might find it interesting to test your senses for sensors. Moreover, the sensor and recognition technologies enable many of the new technological and innovative features of the Galaxy S5. Therefore, what and how much a smartphone is able to sense or recognize is quite significant, which is why we dedicated a quiz to it. Try to match the alphabets to the numbers correctly to test your senses. If you don’t want to, the answers will be kindly provided on the bottom of the page.

Now here is how the heart rate sensor and the finger scanner work and what the sensors of the Galaxy S5 do.

How it works: The Heart Rate Sensor

For the first time in the history of the smartphone, Galaxy S5 features the heart rate sensor, which enables users to monitor their physical information. This opens up a lot of opportunities in terms of the benefit that can be produced from the utilization of such information.

Users can check their heart rate through the S Health app. By following the instructions that the S Health provides, users simply need to gently press their finger against the heart rate sensor, which is located on the bottom of the camera on the back panel.

The Heart Rate Sensor consists of the Red LED and Pulse Sensor. First, the Red LED shoots the light to the user’s skin. Then the pulse sensor measures the movement of the red blood cells of the capillaries, which is underneath the finger, according to the pulsation, to measure the heart rate by calculating the frequency of the wave per minute.

The measured heart rate sensor is displayed on smartphone, and heart rate measurements can be recorded and saved into the smartphone. Users can measure their heart rate before and after a workout to check out their health and workout status.

How it works: The Finger Scanner

One other ‘most mentioned’ sensor of the Galaxy S5 is the Finger Scanner, which has improved the usability and the security of the smartphone.

The Finger Scanner of the Galaxy S5 supports not only a biometric screen locking feature, but also supports individual file locking features with ‘Private Mode’ and secure mobile payments.

For example, People tend to use relatively simple passwords, such as their birthday, which is relatively unsecure. Utilizing biometric information, users improve the security of their mobile purchasing. Maximizing opportunity and technology, Samsung has forged a partnership with Paypal, an internet mobile payment system, to designate passwords with fingerprints to make a mobile purchasing easier and more secure in 26 countries.

One of the main concerns of the finger scanner has been the personal data breach of fingerprints, because fingerprints tend to be saved as an image.

In the Galaxy S5, the distinctive characteristics of fingerprints are extracted and encrypted rather than saved as a full image. Then it is processed as a template through the secured zone of the device’s chip. Moreover, every devices are encrypted uniquely, so no one can decode the information regarding the fingerprint, even Samsung itself.

Therefore, users’ fingerprints are not saved in the device, so there is no danger of information disclosure.

Through Samsung Mobile APK, various apps utilizing the Finger Scanner are expected to be developed by third party developers .

Below is the list of 8 other sensors of the Galaxy S5, which also featured on the previous model:

Barometer: Determines the atmospheric pressure of a user’s current location and the altitude. Barometer can calculate how many calories are burned according to the atmosphere pressure and altitude.

Hall Sensor: Recognizes whether the cover is open or closed.

RGB Light Sensor: Measures the intensity of the light and is applied to the Adapt Display, which optimizes screen to surroundings.

Gesture Sensor: Recognizes hand movements by detecting infrared rays that are reflected from the user’s palm.

Proximity Sensor:  Recognizes situations where the user places the smartphone close to his or her face. It can immediately make a phone call and turn off the screen to prevent unnecessary touch interaction while the user is on the phone. 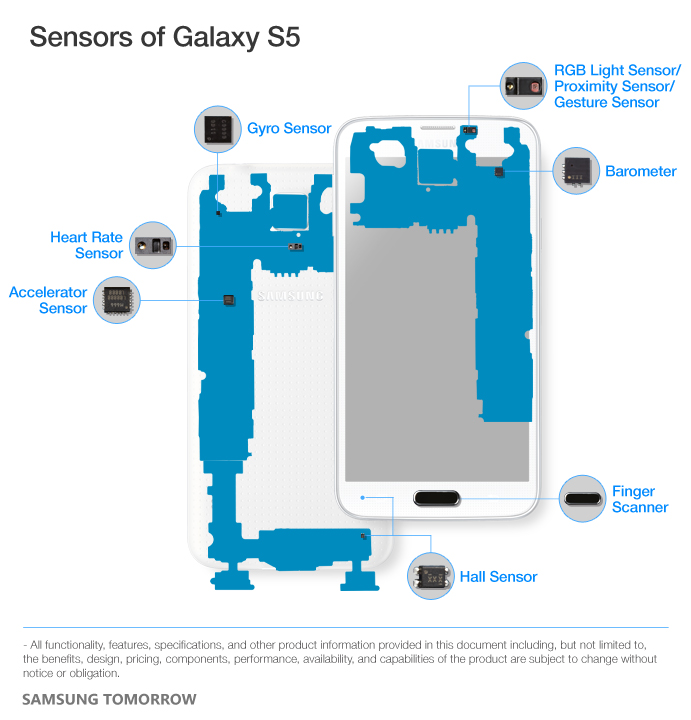