Samsung Electronics has released a wide range of new A4 all-in-one printers in 2012, looking to step up its game in the color laser printer market. The new line is already drawing the attention.

What made it possible to release such a powerful lineup of new products? We met with the developers of the new products, who were tasked with combining high speeds, superior image quality, and convenience, all in one package. 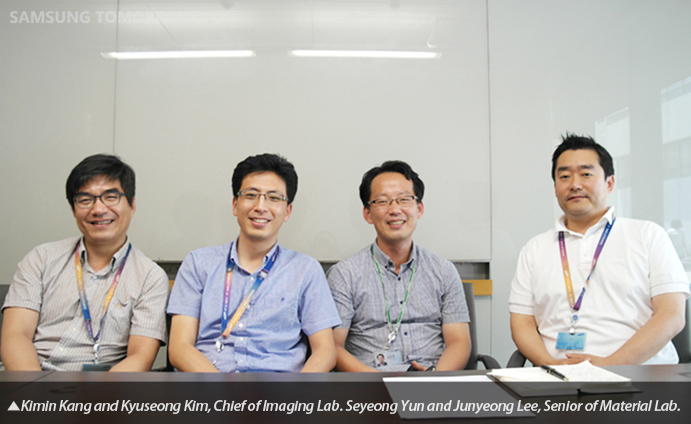 Fate of developers: Must stay one step ‘ahead’

Q. When did you start developing the A4 color laser printers/all-in-one printers, and where did you place the focus on?

Kim The development of the product itself normally starts a year and half in advance. Considering that the SoC (System On Chip: the technology and product where various semiconductor components are integrated into one) is developed beforehand, for all practical purposes it begins about four years in advance.

For this newly released product, the schedule was tight so that the algorithm development began in early 2012, and SoC development has been in progress since late 2010. Actually, at first we were aiming for release in 2013, but the schedule was shortened by a year, so we were pushed to the limit trying to make the release date.

Despite the short development period, thekey was to improve the performance and lower the material cost. At times it was hard, but what we maintained under the harsh conditions was the ‘continuity’ of Samsung products. New products had to have a unified algorithm just like the products developed before and after. And of course it had to be distinguished at the same time.

Q. You applied semiconductor technology to this product and introduced probably the first all-in-one board that the world has seen in this product field. How is it different from the existing, separate boards? And were there any difficulties in development?

Kang The existing all-in-one printers had an average of roughly seven chips and four separates boards each responsible for scanning, printing, and UI (user interface) management. We integrated all into an all-in-one board. This was because of ‘performance’ and ‘material costs.’ By integrating each chip, the material costs were saved. But as many were integrated into one, there was the problem of the increase in size. As you know, this model was aiming for an ultra-mini size, so the role of the developer was important.

Integrating the many chips into one, the performance was bound to be better. It dramatically decreased defects, and the service capability was strengthened.

Kim Development always comes with pain. This time, it was not one but many products, which made it tougher than ever. But we’re happy to say we made it. There were various pre-examinations and we also had the assurance that it would work. To enter the commercialization stage, we passed through SoC development and testing, and as a result we felt a strong ‘power’ in this product. 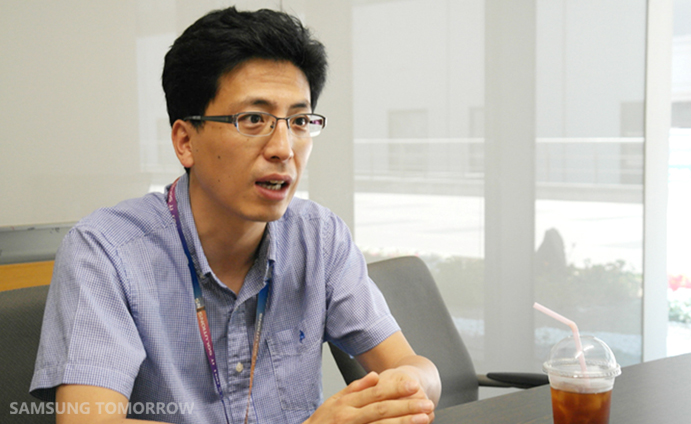 Q.The statement ‘development always comes with pain is impressive. How do you overcome that tough process?

Kim It is the power of Samsung. The resource investigation or pre-development does not just begin once the new product release schedule is confirmed. It’s a company-wide habit of constructing back-data for all necessary categories of products at all times. In addition to internal research, it is very important to thoroughly keep track of competition and never lose the tension that spurs innovation. In short, I’d say it’s a company culture to be prepared. 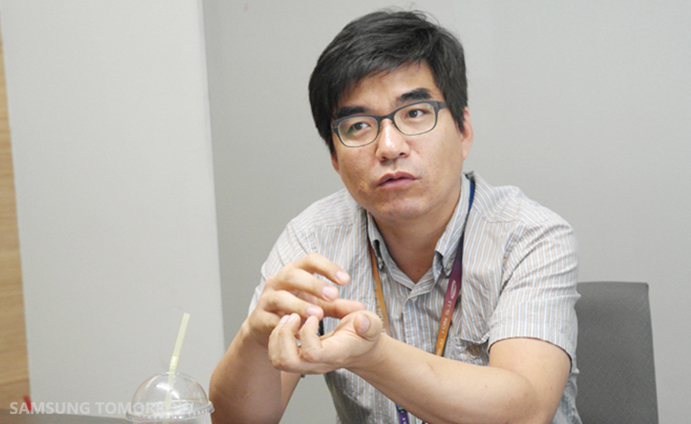 Q.What is the new technology that stands out the most in this product, and what are its strengths?

It’s the image strengthening technology ReCP (Rendering Engine for Clean Pages)we independently developed in order to actualize the high image quality color printing. This technology implements the top-level image in the same class by actualizing precise and clear color without blurring for both text and graphics.

This technology was presented as the special advantage of the new products this year, but it is actually the result of joint pre-development of new image-processing architecture with SoC and S/W. In order to discover improvements, we rechecked  our previous research, and adhered to the far-seeing perspective by applying the forerunning Samsung standards.

ReCP technology introduces the concept of Contone Image Pipeline, being designed to allow all image processing steps to run in 24-bit RGB (Red Green Blue) or 32-bit CMYK (Cyan Magenta Yellow Black) Color Space, and it especially maximized the capabilities for text clarity enhancement, graphic quality enhancement, and color expression. We take pride in our ReCP image processing technology, and the fact that it is very competitive in comparison to others in the industry. We think ReCP is just a beginning. In the future, re-interpreting the needs of the high-end digital all-in-one printer market into technology and turning those into competitive results will be more important, in my opinion. 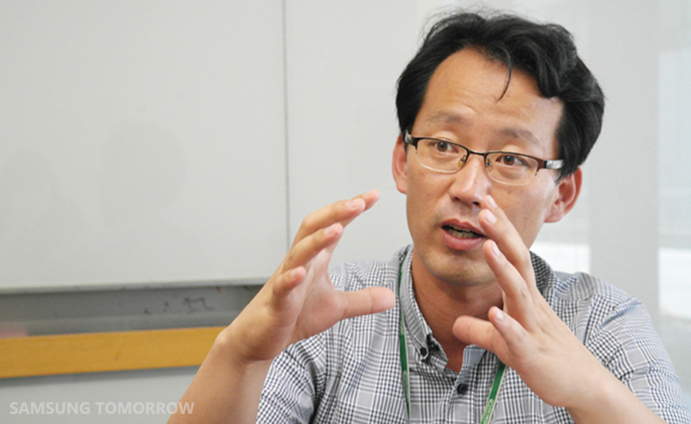 Yoon Before, we used ground toner. Ground toner is created by, well, physically grinding the mixed raw materials into powders. In contrast, the polymerized toner is created by turning the raw material into semi-liquid and through the chemical condensation process under water. Due to this, the particle is much smaller and more uniform. This is directly related to printing quality. It can cleanly and clearly express images for forms.

Lee As the amount of wax contained in toner increases, the gloss of the printed material is improved, which is another characteristic. The durability is also improved for a performance that can endure the stress of high-speed printing, as well as ensure high-quality images with a remarkably long lifespan.

Q.There must have been many difficulties in actualizing the polymerized toner. What was the hardest part, and are there any memorable episodes?

Yoon We had to change the ‘perception’ of concerned parties in the development process that worried about breaking away from the regular ground toner and utilizing the new polymerized toner. Innovation is always risky, and it’s a challenge in development to break away from the existing methods and introduce the new.

Here, the central capacity of Samsung was reflected in the synergy. That is, we developed the polymerized toner jointly with Samsung Find Chemical and mass-produced it. We had to pioneer the mass production method for the new toner, which did not exist before. Everyone concerned with the project, such as developers and product planners, had to join together. Through persuasion, conversation, and countless meetings, we decided to take the challenge together. We began with a new, unexplored area with the goal of achieving the best performance possible.. And with everyone’s hard work, we did it!. 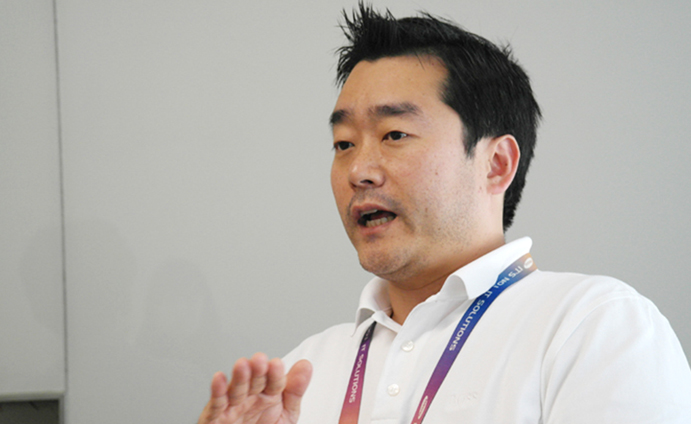 Q.Every day must have been felt very tense. How was the process of collecting and combining the opinions of those involved?

Kim The daily meetings continued for about two months. For results in a short period, the existing experiences and know-hows inform the basic process, but it was important to investigate the alternatives  looking for improvement, even if it meant pulling all-nighters every other night. With millions of possibilities, we researched every evening while approaching the objectives and reviewing them one by one.

Kang Products like cell phones or laptops come out with new products almost every year, which causes its own problems, but the short gap makes it easy to catch the trend and provide frequent opportunities to introduce new technologies. For the printer or all-in-one printers that we researched at this time, the product period is quite long, being about three years. So it is essential to conduct thorough pre-development, and if you do not seize that one given chance, it may end up being a failure for the next 3 years.

Q.You released not just one product, or several products in succession, but a total of eleven products. Did the entire process progress together in the development process?

Kim Yes. The joint release required stamina, physical tamina from the beginning. In order to minimize errors in the process of applying the same technology to each product, complicated test procedures were necessary. Especially, printer and all-in-one printers are devices that express the image, and the system is too dynamic. When the same technology is applied to nine different products, the results are widely varied. Time was spent looking at how to compensate for these gaps and minimize the effects. 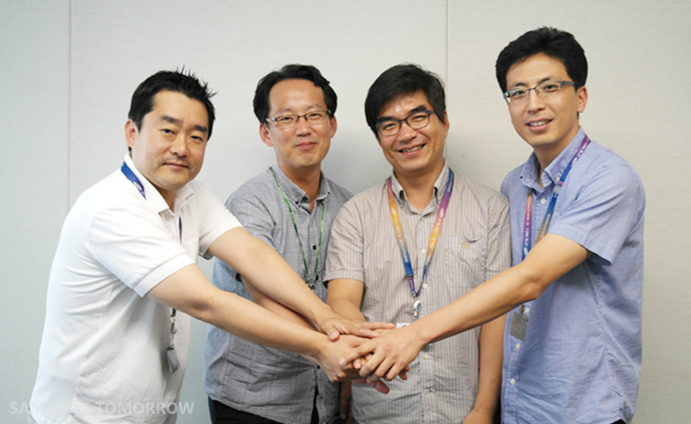