A month ago, the demo video of the Samsung Food ShowCase Refrigerator was posted on Youtube. We also released an article on it when it was first introduced back at IFA 2013. Well, first we would like to share a demo of Samsung Food ShowCase Refrigerator, which will tell you a lot of things about it, and then we are going to tell you some things that this demo doesn’t tell you scene by scene. See if you can catch it.

Cool demo right? As you can see, many functions and features are being shown in this demo of the Samsung Food ShowCase refrigerator. Now let’s take a look at what it hasn’t told you scene by scene.

Scene #1: Each and every family member opening the refrigerator.

According to the one of the designers of the Food ShowCase refrigerator, the refrigerator was carefully designed based on extensive research done on each family member’s behaviors and characteristics, including their heights.

This is why you can see each family member taking out what they want, such as macaroon and olive oil, quickly from each different shelf of the Showcase of the refrigerator.

We all know there is something very satisfying in opening both doors of the refrigerator simultaneously with both hands; it feels like the most epic way to open it. However, clearly, that isn’t the message Samsung wants to project. (Although, it is hard not to say that we at Samsung Tomorrow agree with such feeling.) 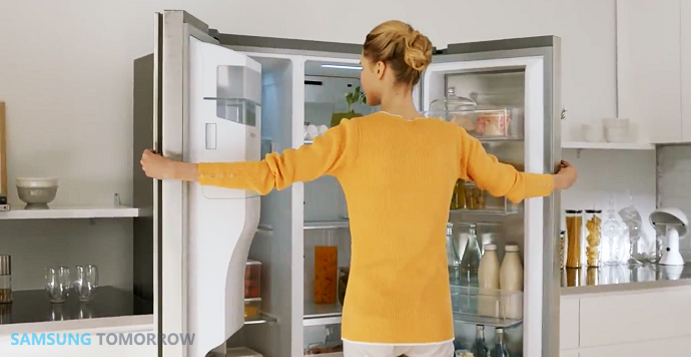 Here is what this scene is about. Refrigerator needs to be easy to understand, meaning everyone should be able to find what he or she wants easily. Not only Food ShowCase refrigerator is designed in a way that is easy to see everything inside the refrigerator at a glance, it also makes it easy to organize and find things.

So the mother in the demo video isn’t just opening the both sides of the refrigerator for our visual satisfaction. She wants to show that it requires her minimal effort to see what is inside.
That is it for our breakdown of the demo video. It is very cool to hear that you enjoyed this article as much as we did. We are sure that you will enjoy the Samsung Food ShowCase refrigerator as much as the article.