Are you one of those people who never know how much detergent to put in the washing machine? Are you afraid to use the dryer because of high electricity bills? Are you tired of waiting around for your clothes to be washed and dried? To solve all of these problems, Samsung produced the ‘Bubble Shot 3 W9000’ washing machine. (‘Bubble Shot’ is the Korean name for the W9000. It’s called many different names around the globe.) Now, it is easier for everyone to do laundry. Samsung Tomorrow brings you the story behind the design and development of this washing machine. Yes, you can innovate washing machines!

So what’s so special? 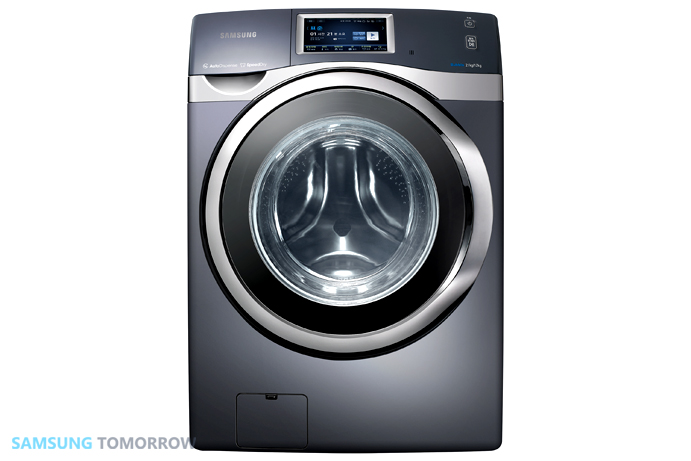 What makes this innovative product so unique are its four groundbreaking features: the a totally new anhydrous (fancy word for ‘no water required’) drying feature called ‘Air Speed Dry’, automatic detergent injection a.k.a. ‘Auto Dispense’, bubble (a.k.a. ‘PowerFoam’ in some regions) and two water shots (or ‘AquaJet’), and a 8 inch full touch LCD screen. Let’s get some more details on these.

The first issue to tackle was the time it took to do laundry. Putting the clothes in, then detergent, then washing, then taking it out, and then drying it on the clothesline. The designers realized first and foremost that the whole process was too time-consuming.

The designers wanted to produce a washing machine that could finish the job quicker than any machine and add innovative features at the same time. Features such as auto dispense and an ergonomic loading section also helps. And washing times were made shorter by making the soap better penetrate stains (‘Bubble’ or ‘Power Foam’ technology) and producing a stronger water shot to improve washing/rinsing motions (‘Water Shot’ or ‘Aqua Shot’ technology). But the most drastic changes we made was the drying time – we reduced the average time in half, from 176 minutes to 78 minutes. This amazing feature is the ‘Air Speed Dry’ feature. 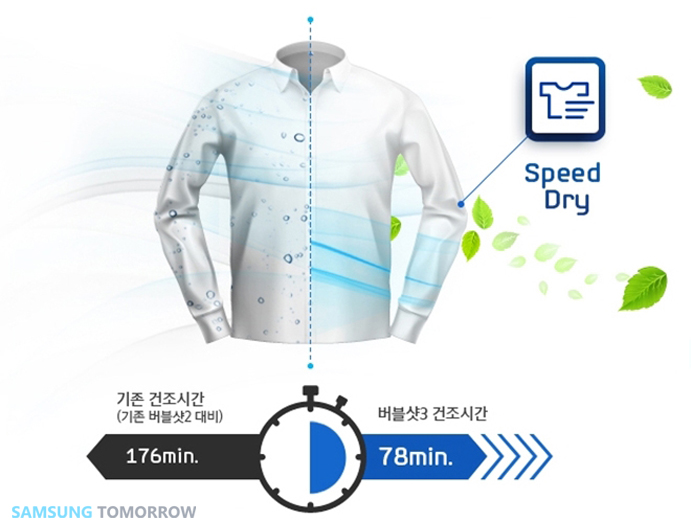 When developing this plan, the designers also thought about the shortage of water around the world, especially in developing countries.

According to a survey, what Korean consumers love about the Bubble Shot 3 the most is its ability to extract the exact amount of detergent and fabric softener that is needed to wash clothes depending on the weight and type of laundry. This exclusive feature is ‘Auto Dispense.’ This function was a totally new concept which Samsung created. To implement this feature, the designers really had their work cut out for them. 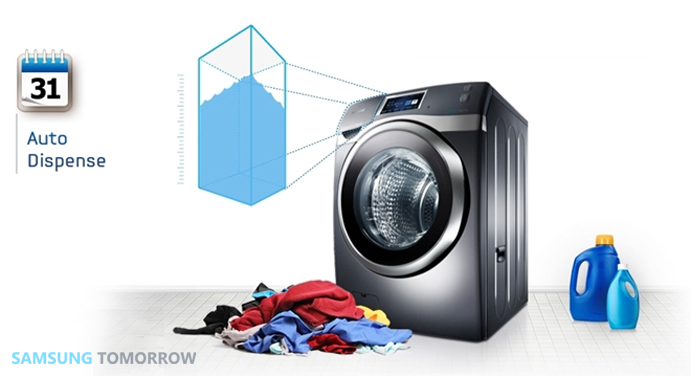 The designers claimed that they had to wash many clothes day and night to find out the right amount of detergent that is needed for each different laundry load. They also had to analyze the recommended usage amount and various consumer conditions. The result was an advanced device in which users only have to add detergent and fabric softener one time per every 16 loads.

Yeonsoo Lee, a colleague from the Marketing Department, said that her husband now helps her with the laundry thanks to the ‘auto dispense’ feature.

Samsung began applying ‘bubbles’ in 2008, which brought an amazing development in washing capacity, and this technique has evolved as new products were introduced. The first generation ‘bubble’ was a bubble pump, which created soapy, sudsy bubbles by mixing detergent, water, and air. The second-generation bubble focused on saving energy. In the third generation, Samsung introduced bubble & shot, combining suds with shots of water. 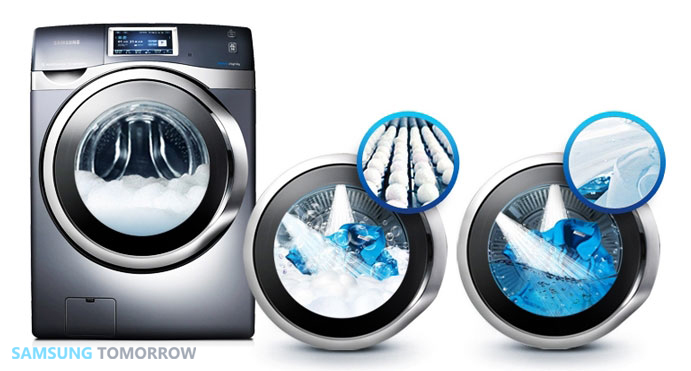 Washing Machine, Thinking Outside the Box!

LCD on a home appliance? To some that might sound outrageous! But, for the first time in Korea, a touch screen was applied to the Bubble Shot 3. After revealing the washing machine, this feature also received positive responses from the consumers. What did the designers have to say? 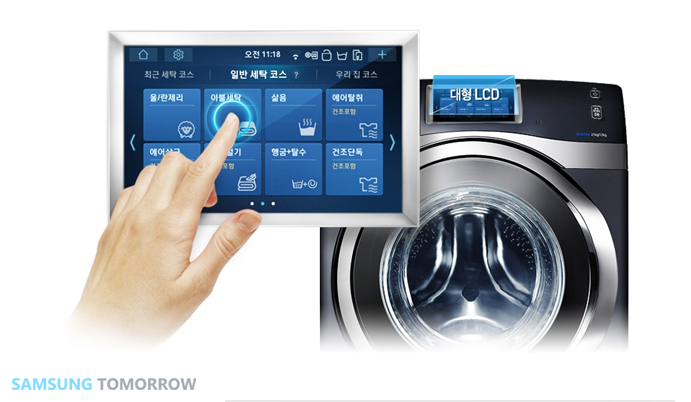 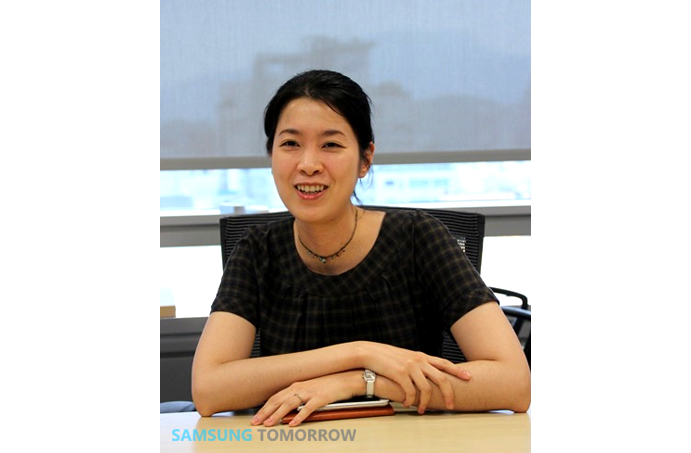 Designer Hong, who was in charge of the UI of Bubble Shot 3, had made numerous UI designs before but since it was her first time designing a washing machine, she recalls that it took a lot more time and effort to make it elegant and convenient LCD UI.

Hoping for a new level of Bubble Shot in the Future

Curious about the future Bubble Shots, we asked the designers and developers which feature they would like to see on future washing machines. 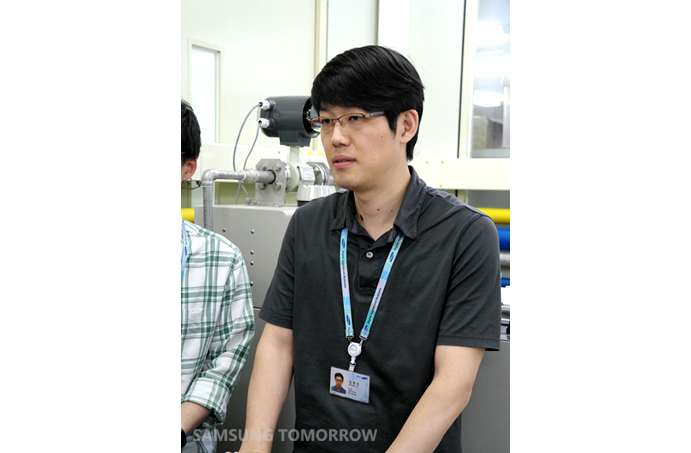 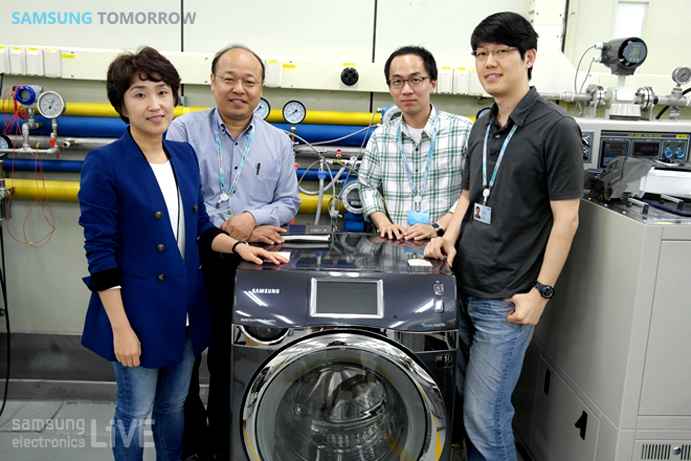 *The Bubble Shot 3 W9000 is a Korean variant. Similar washer/dryers may or may not be sold elsewhere and design, features, and pricing may differ.

** All functionality features, specifications, and other product information provided in this document including, but not limited to, the benefits, design, pricing, components, performance, availability, and capabilities of the product are subject to change without notice or obligation.