Samsung Electronics maintains 216 global bases in 74 different countries, with those offices employing the services of 2,389 first-tier suppliers. This meant that when Samsung set out to build a supply chain that was economically, socially and environmentally sustainable, the task represented a significant challenge.

Samsung optimizes costs and promotes synergy to ensure economic sustainability, mandates adherence to international regulations and transparency for social sustainability, and insists on only working with certified Eco-Partners the world over. The company works relentlessly to help its suppliers achieve growth according to the belief that Samsung’s success is rooted in the competitiveness of its suppliers at every level.

Samsung evaluates prospective suppliers based on criteria that include EHS (environment, health and safety), labor and human rights, and Eco-Partner standing. After a company passes the initial screening, in-house experts in each category are deployed to conduct on-site assessments of the prospective supplier. Companies are required to comply with regulations regarding the handling of chemicals of concern, bans on discrimination and inhumane treatment and social and environmental impact, among others.

An open-sourcing program is used to allow companies to apply to become Samsung suppliers. The International Procurement Center (IPC) and Global Supplier Relationship Management System (G-SRM) accept submissions from organizations that want to propose use of their components or materials for Samsung products. Samsung’s IPCs are additionally present in strategically significant locations all over the world to monitor regional technology trends and identify potential suppliers. These methods allow Samsung to ensure that its supply chain remains competitive, as well as sustainable.

Once new suppliers are brought on-board, Samsung looks to heighten transparency by disclosing its list of suppliers with their consent. From there, procurement operations are managed by an integrated procurement system. The company requires suppliers to adhere to the Samsung Supplier Code of Conduct, which ensures that they operate in accordance with local laws and regulations, while helping them maintain responsible management of their working environments.

Samsung performs in-depth supplier evaluations annually. During these evaluations, suppliers’ competitiveness and ability to maintain sustainability are measured using eight evaluation criteria: technology, quality, responsiveness, delivery, cost, EHS, finance, and law. Several methods are employed in the evaluation of suppliers, including on-site inspection and the review of previously uploaded data. Evaluations are carried out on an ongoing basis throughout the year, allowing suppliers to monitor their performance along the way. In 2018 Samsung evaluated 91% of its total suppliers, with those who had been registered with the company for less than a year excluded from evaluation. The company also requires all primary suppliers to complete annual self-assessments according to 85 criteria set out by the RBA (Responsible Business Alliance), of which Samsung is a member. 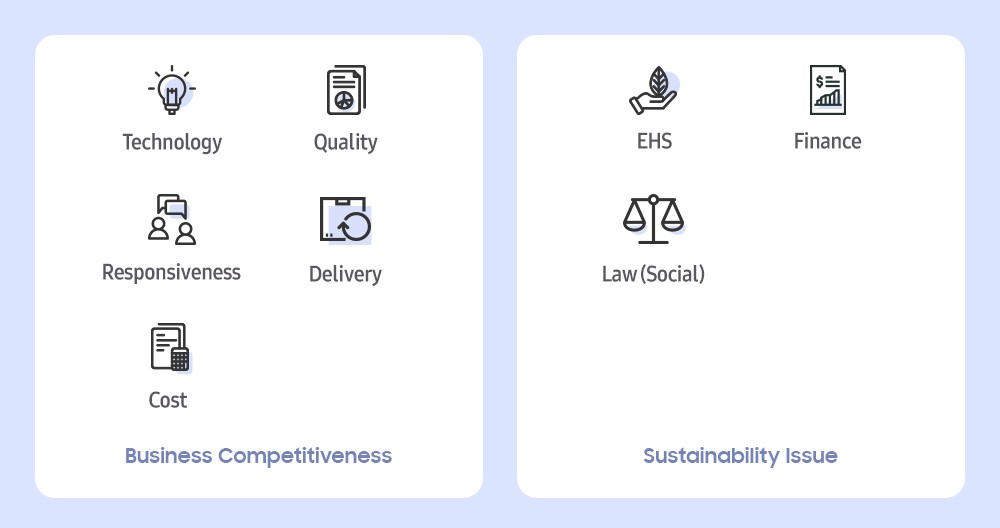 Samsung also conducts both on-site and third-party audits of its suppliers. On-site audits are led by RBA auditors, and conducted by dedicated teams who interview suppliers’ employees and examine their workplaces. After the audit is carried out, Samsung devises final improvement tasks, which are expected to be completed within 30 days. Applying the same criteria as the RBA, Samsung achieved a compliance rate of 91% for on-site audits in 2018, and the company is making further efforts to continue lifting that number. Also in 2018, Samsung drastically increased the number of third-party supplier audits, especially in the Southeast Asian region, where some concerns around working environments had been raised. Despite the significant increase in the number of third party audits in 2018, compliance rates were relatively consistent with those from 2017, implying that efforts to improve suppliers’ working environments had been successful.

Samsung prioritizes improving the market competitiveness of its suppliers at all levels to create a healthy, sustainable corporate ecosystem. 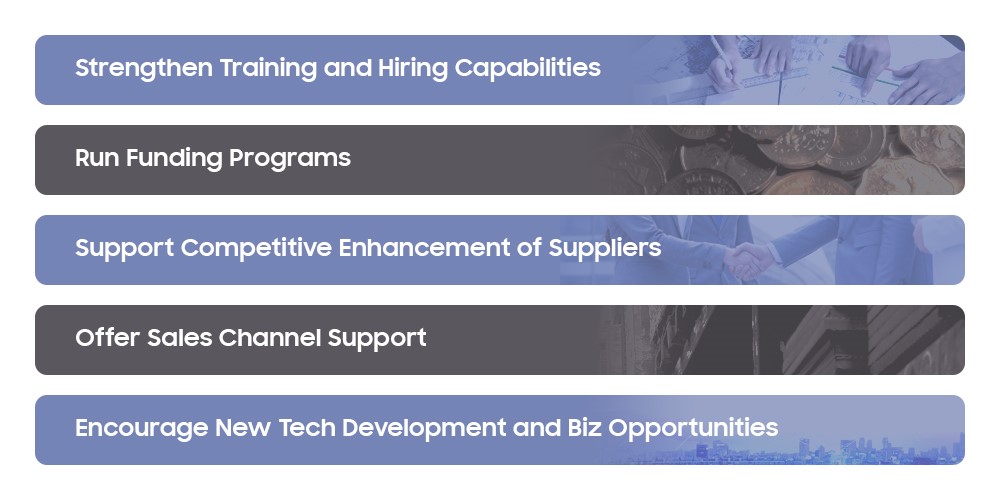 Samsung seeks to strengthen the training and hiring capabilities of its first, second and third-tier suppliers by providing programs in leadership, global, R&D, procurement, sales, and business innovation. Furthermore, the company holds annual job fairs to help ensure that suppliers are able to secure top talent.

Samsung also runs funding programs to support suppliers that are experiencing financial difficulties. These include low-interest loans, as well as support funds that provide zero-interest loans to allow companies to make cash payments to sub-suppliers within a 30-day window.

Samsung also supports the competitive enhancement of its suppliers. To ensure that its suppliers remain innovative, the company offers worksite consulting, product stabilization and EHS consultation to its first, second and third-tier suppliers, as well as enterprises that it has not previously worked with. The company also runs programs that get suppliers acquainted with the newest technology trends to ensure that they remain up to date.

Since 2018 Samsung has been providing training sessions for Vietnamese industry experts under its Vietnamese Industrial Consultant Training Program. Participants include consultants, public officials and professors, and the goal of the program is to help nurture local human resources in the technology sector and lift the rate of production for locally produced components. The program offers two tiers of training – local consultant and master consultant – and is aiming to train 200 local and 60 master consultants by 2020.

In 2015 Samsung launched the Smart Factory Construction program, which aimed to share technological expertise regarding the establishment of smart factories with Korean SMEs. Smart factories can improve production efficiency, reduce costs and minimize environmental impact and workplace risks. 1,086 small and medium-sized enterprises took part in the smart factory program between 2015 and 2017 and saw a 54% increase in quality and a 58% increase in productivity.  Samsung is planning to reach out to 2,500 further SMEs in Korea between 2018 and 2022, with the focus of the expanded project being on sustainable growth in the era of industry 4.0.

Recently, Samsung investigated the working environments of migrant workers at its first-tier suppliers in Malaysia. Migrant workers remain a vulnerable demographic, and Samsung demonstrated its commitment to ensuring that they are treated fairly with its 2019 Ethical Recruitment and Fair Labor Practice Training Session, held in conjunction with the International Organization for Migration (IOM). The training drew around 80 managers from Samsung’s Malaysian supply chain, and covered issues such as ethical recruitment, due diligence, and how to identify and combat unethical employment practices. 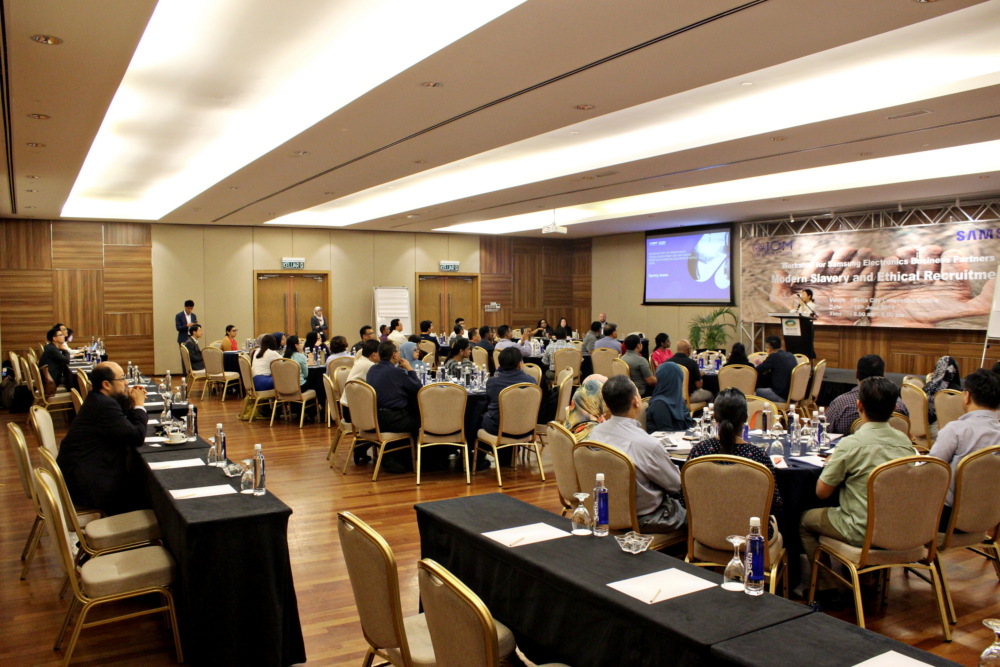 Samsung has developed its Responsible Sourcing of Minerals policy in order to ensure the ethical sourcing of minerals throughout its supply chain. The company takes the issues of environmental deterioration and human rights violations in conflict areas in 10 African countries seriously, and has banned the use of minerals that are mined illegally in conflict regions. In order to help address unethical mining practices in the Democratic Republic of Congo specifically, Samsung Electronics has started the Cobalt for Development program in partnership with other multinational companies. This program aims to improve the labor conditions and the living environments at specific cobalt mines in the country.