A Must-Have for Your Smartphone: Memory Cards

In recent years, people have been using their smartphones for content consumption more than ever before. For example, it’s a common sight nowadays to see people enjoying their favorite TV show or a new movie on the subway or at a local coffee shop. Along with this trend, the utilization of high-capacity memory cards has also been rapidly growing with research firm IHS forecasting the total gigabytes (GB) of memory card space sold in the market to more than double in three years1.

However, the major problem for many people is that the megabytes and gigabytes of data that make up the content they love just isn’t tangible. Thus, they don’t often appreciate the importance of a memory card until it’s too late. Also, the sheer number of available memory cards adds a new level of confusion. While memory cards have a similar appearance, they vary widely in performance and reliability.

To make this even more tangible, let’s imagine you are about to take a long trip. You want to download multiple seasons of your favorite dramas onto your device, especially as you know there may be poor reception where you’re going and you’re also cautious about your monthly data consumption. As it turns out, services like Netflix have given users the choice to save to external memory with just this factor in mind, so you head to the store to purchase a memory card. But, out of the shelves of choices, which one do you choose and how?

What consumers are looking for in a memory card is simple—a reliable choice. As the world’s leader in memory technology, the features of Samsung’s memory cards provide a good guide to making the right memory card choice.

Here are the key tips:

First, transfer speed is key. With a read/write speed of up to 100/90 MB/s2, which is the rate that you’ll find in the Samsung EVO Plus range of memory cards, you can transfer even the largest files quickly. Transferring a 3GB 4k video from a PC to the card will take a mere 46 seconds3. Also, the speed allows for the saving of up to 20 photos with one touch when taking photos in burst Mode.

Compatibility is another valuable trait in a memory card. The best options will work not just with your smartphone, but many other devices. Samsung EVO Plus memory cards are compatible with a wide range of devices, including DSLR, 4K action cameras, smartphones, tablets, 360 cameras, and drones4. SD adapter, which now comes with the purchase of every Samsung EVO Plus card, also ensures the cards are flexible for both microSD and full size SD slots.

The next factor to check for is capacity. Samsung EVO Plus memory cards feature a capacity ranging up to 256GB, among the highest in the microSD market, which means all needs are catered for. With 256GB of storage5, you have enough space to keep 12 hours of 4K video6 or up to 22,500 songs7. Running out of space is no longer an issue.

The final, but by no means least important factor, is reliability. The fact, as mentioned earlier, that Samsung EVO Plus memory cards come with a ten-year limited warranty8 will give users added assurance. Additionally, the cards feature 4-proof technology9 meaning, in specific, they can survive up to 72 hours in seawater (IEC60529, IPx7), endure extreme temperatures10, withstand airport X-ray machines11 and resist a magnetic field equivalent to a high-field MRI scanner12.

In a marketplace where there’s so little to differentiate products by physical appearance, it pays to look beyond the aesthetics. Under the hood of the best-in-class memory cards is enough cutting-edge technology to boost performance and reliability. In real terms, that means less time worrying and more time enjoying the device the card is inserted into. It also means your favorite content will always be with you thanks to the extra capacity your memory card will provide. 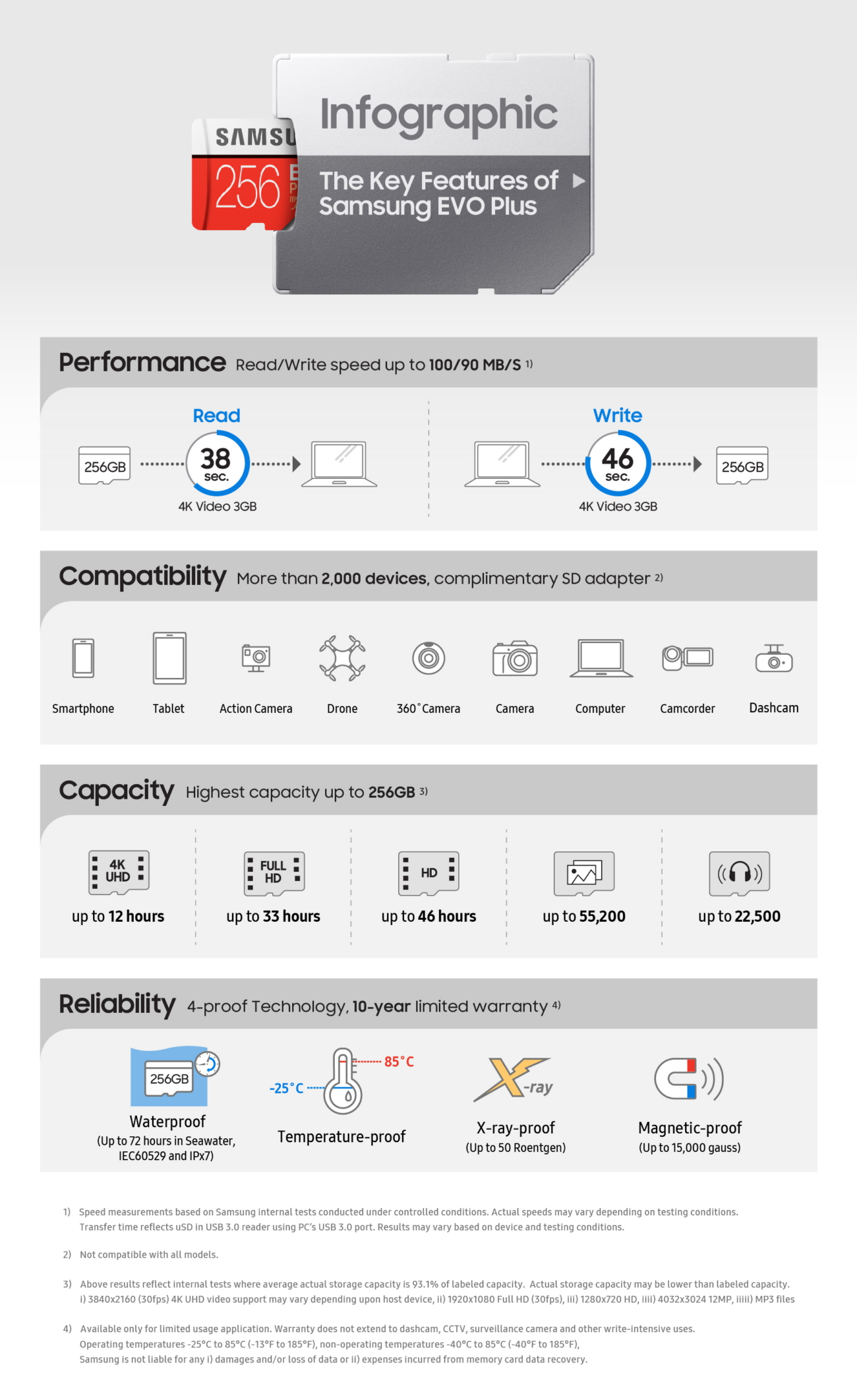 2 Speed measurements based on Samsung internal tests conducted under controlled conditions. Actual speeds may vary depending on testing conditions.

4 Not compatible with all models.

6 3840×2160 (30fps), 4K UHD video support may vary depending upon host device. Actual storage capacity may be lower than labeled capacity.

8 Available only for limited usage application. Warranty does not extend to dashcam, CCTV, surveillance camera and other write-intensive uses.