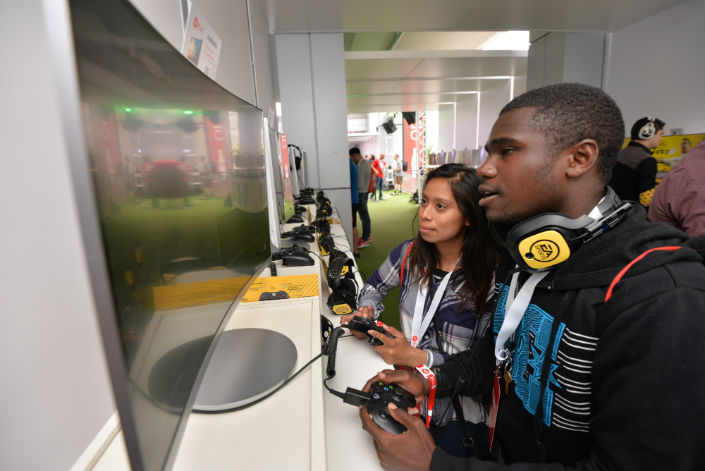 Imagine the setting … you are lining up for a penalty kick that can win soccer’s prestigious World Cup. You are staring down one of the best goalies in the world so intently that you can see the color of his eyes. The crowd is cheering loudly behind you, complementing the bright green grass and blinding lights.

Through enhanced immersion and presentation, Samsung’s new curved gaming monitors can make this scenario a reality (or at least a virtual one). The company signaled its entry into the gaming market with the release of its first curved, competition-designed monitors – the CF591, CF391 and CF390 displays – earlier this year, introducing a host of technologies designed to elevate the gaming experience.

Samsung’s play for gamers comes as the industry reaches unprecedented heights. Entering 2016, the Entertainment Software Association estimated video games to be a $23.5 billion industry in the U.S. alone. Additionally, as gaming tournaments have evolved from quiet cyber forums to must-see events held at arenas such as Madison Square Garden, prominent global television networks such as TBS and ESPN have added e-sports to their broadcast slate.

With the launch of its CF591, CF391 and CF390 displays, Samsung aims to deliver a refined gaming environment that players will find engaging and comfortable … and a step up from the flat-screen formats the industry has become accustomed to. Samsung’s curved gaming monitors feature an 1800R curvature radius that delivers panoramic and immersive viewing angles. Furthermore, the curved format is designed to match the natural shape of the human eye, ensuring a less strenuous experience conducive for long-term play. 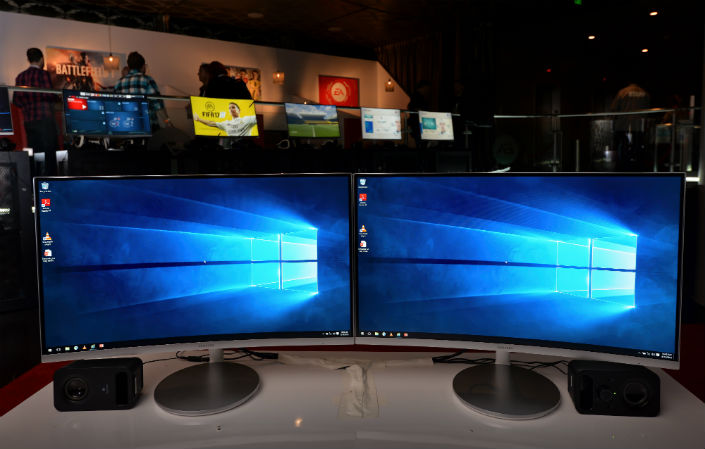 Appropriately, Samsung decided to make its innovative monitors available for first-hand experience at the industry’s newest, consumer-focused gaming convention. Hosted by Electronic Arts (EA) Games, the inaugural EA Play conference invited gamers to preview its latest titles and build excitement for the future of competition during a three-day event held in mid-June in downtown Los Angeles.

During the event, EA demonstrated the latest editions of Titanfall 2, Madden 17, FIFA 17 and NHL 17 on Samsung’s CF591 curved monitor, giving new perspective to some of the industry’s most recognizable titles. From the show floor, both gamers and developers enjoyed the enhanced presentation and gaming experience the curved monitors offered, marking a welcome component to a three-day stretch celebrating the future of gaming … one Samsung is helping redefine.

EA Play offered many attendees their first experience with a curved gaming monitor. Many within this audience said they typically compete on flat-screen monitors, PCs or televisions, and were thrilled to see a realistic and captivating game presentation brought to life through a compact screen. If anything, the EA Play demo stations piqued gamers’ curiosity – most in attendance said they would like to sample other titles in this format, and learn more about how the curved format can improve their gameplay.

In certain cases, the curved displays became a “must-have” at EA Play. A special QR code promotion attached to each demo monitor directed participants to a product page while simultaneously offering a sales discount. Monday’s crowd alone saw several attendees take advantage of the promotion, transforming their future gaming experience on the spot.

Show floor conversations indicated that gamers seem aligned on the components of the ideal gaming experience – continuity, realism, visual depth and a presentation they can stay focused on long-term. Overall, attendees found that Samsung’s curved gaming monitors not only met, but exceeded their expectations along these criteria.

Gamers cited the CF591 monitor’s lack of glare as a clear advantage. Supported by a 3,000:1 contrast ratio that produces darker blacks and reduces light leakage, the CF591 is designed to amplify color depth without distraction. In both the sports (Madden, NHL and FIFA) and virtual combat (Titanfall) settings, gamers were delighted by the refined visual continuity and ability to continue playing without averting their eyes. 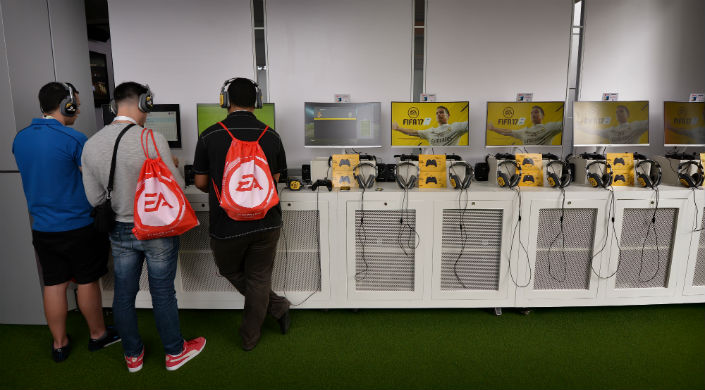 Likewise, EA Play participants uniformly were impressed by the curved monitors’ immersive presentation. Gamers on hand cited a more realistic feel than they had previously experienced on a flat screen, and felt that the expanded visual depth added new, previously unavailable visual elements. The result, many said, was a greater connection to the game and a desire to explore previously untapped components (for instance, new football plays or virtual worlds).

The benefits of Samsung’s curved gaming monitors were not only evident to the players on hand. Game developers and brand managers additionally recognize the potential differentiating advantages of these modern displays as well. In fact, the teams at EA Play said they were immediately wowed by their respective games’ presentation during their initial tests on the curved monitor and considered it vital to offer this environment to show attendees.

Given its recent growth, the gaming industry is more crowded than ever, making it more of a challenge for individual titles to maintain and build audience share. Likewise, gamers expect annual titles such as Madden or FIFA to deliver something new and advanced from the previous version. Curved monitors, such as Samsung’s CF591, can help developers and brand managers satisfy these customer demands. In offering customers a visual experience like they’ve never seen before, gaming developers and brand managers can promote curved technology as a necessary differentiator.

From the initial feedback at EA Play 2016, Samsung’s first foray into the gaming market can be considered a rousing success. Gamers were awed, intrigued and captivated by the company’s new curved monitors, creating new opportunities for both Samsung and the gaming industry to continue evolving further.

Gaming mavens unable to make it Los Angeles for EA Play still can get in the game this summer. A Samsung bundle promotion will offer any U.S. or European consumer who purchases a new Samsung CF39 Series or CF591 curved gaming monitor a complimentary copy of a select EA title, including standard edition versions of FIFA 16, Need for Speed, Battlefield 4 and Battlefield Hardline.