Modern display and telecommunications technology has been a huge boon to sports fans. Giant, curved screens in Ultra High Definition can bring sporting events to life, immersing people in the action.

But in Portugal this fall, lucky sports fans have enjoyed two new opportunities that have brought sports entertainment to the next level—completely enveloped in the action, in 360 degree virtual reality, thanks to the Samsung Gear VR. In September, a professional football game was broadcast live in virtual reality, and then at the end of October, surf enthusiasts were able to watch a surfing competition, all using the cutting-edge Gear VR. Yes, it’s been a good year for the Gear VR, and now sports fans, too, are getting the chance to see what the next generation of media is all about.

The Portuguese are among the most passionate football fans in Europe, especially in the city of Oporto, whose team FC Porto has won the Primeira Liga 27 times and the prestigious Champions League title twice. On September 20, FC Porto squared off against Lisbon’s SL Benfica, another Portuguese powerhouse with 34 Primeira Liga titles, also two-time Champions League titlists. When these two teams play each other, the stakes are always high, but on this occasion, the match was further magnified by the presence of Samsung’s Gear VR and five 360degree cameras.

Together with the Portuguese cable operator NOS, SPORT TV, broadcasting specialists Mediapro and the Portuguese Professional Football League, Samsung helped people watch the game via the Gear VR, just as if they were at the stadium – except they were actually in the Samsung Experience Store in Almada and the NOS movie theater at the Centro Colombo shopping mall in Lisbon.

With one special, six-lens, 360 degree camera located behind each goal-line, another behind each team’s bench and another in the stands, people watching could choose from five different amazing vantage points to watch every minute of the thrilling contest.

As soon as the game started, the lucky football fans put on the Gear VR headsets and had that “wow” moment. “It really works. I really feel like I’m on the pitch. Look, it’s Casillas (FC Porto goalkeeper) just in front of me!” said one impressed viewer.

Another place where the Gear VR made a big splash in Portugal was at the Moche Rip Curl Pro on Supertubos Beach on October 24. The World Surf League teamed up with Samsung to broadcast the championship tour event worldwide for all Gear VR customers.

Even people thousands of kilometers away from Portugal (or from any beach) were able to see for themselves what it’s like to ride the waves, introducing new fans to the sport. There’s nothing like virtual reality for really giving people a sense of the emotions of surfing, not to mention the power of the oceans and the athleticism it takes to surf.

“We believe this is the future of entertainment,” said Frederico Paiva, Business Director of Samsung Portugal. “With this breakthrough technology and our most recent activation with the WSL, we are able to expose more people to the wonders of the sport of surfing.”

“The virtual reality content is amazing and regardless of your athletic ability, you can catch a wave like the pros,” said Chris Culbertson of the WSL. “The cameras enabled fans to see what it was like to be part of the crowd on the beach, in the VIP area and even in the athletes’ lounge, so they could hang out with their favorite surfers.”

You can get a sense of what the immersive surfing experience was like on the Portuguese beach even if you don’t own a Gear VR, with this exciting video from the World Surf League. 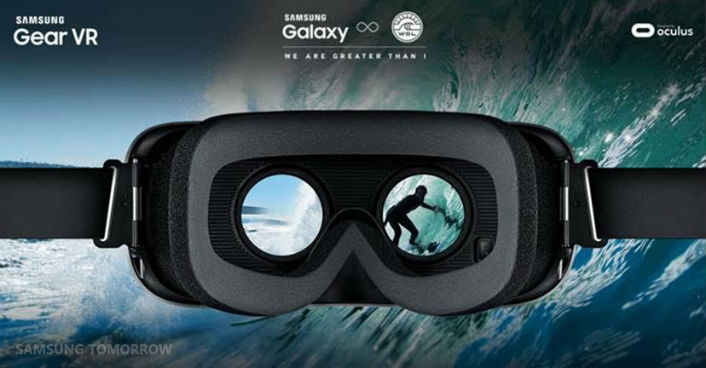 The Best Is Yet to Come

Samsung has shown how technology can bring sports even closer to the fans in a way nobody has ever before done in Portugal. In 2014, in the run-up to the FIFA World Football Championship, Samsung did the first ever live multi-platform broadcast of a football match in Ultra High Definition (UHD). The fans had the opportunity to watch the game between the national teams of Portugal and Greece with an unprecedented level of detail and impressive color richness.

And now, whether on the pitch or in the ocean, the Gear VR allows people to experience the reality and passion of sports more deeply than ever. And as these recent events in Portugal show, virtual reality isn’t just science fiction any more—it’s already facilitating the beginning of an amazing new era of the sports entertainment experience.