When Samsung announced Galaxy S5, some of the key phrases here are, ‘what matters most’, ‘refined experience’, ‘day-to-day use’, and, most importantly, ‘consumers’. This applies to everyone, no matter who you are or what your abilities are. Check out the list of accessibility features of the Galaxy S5, truly a smartphone that is for everyone.

1. For People with Visual Impairments 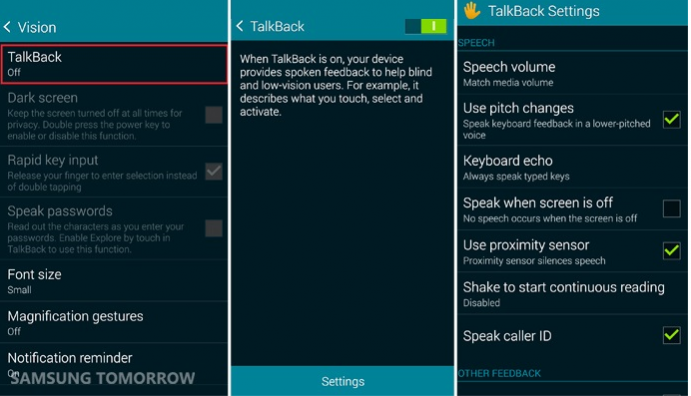 TalkBack is a feature that reads the screen of the smartphone for people who have low vision or cannot see. Using the basic functionality of Android OS, Samsung provided its own differentiated functions.

When taking a photo with TalkBack turned on, the screen will be divided into nine equal parts and the Galaxy S5 will tell the user the location of the detected face. If a person has been recognized, the smartphone will guide the user to move the camera so that the person’s face is in the center of the screen. Through this, people with less clear vision can take advantage of the 16M camera feature.

Also, when the user is talking to an operator on the phone and has to type something, the smartphone will automatically change into the speakerphone mode as soon as he/she moves the device away from his/her ear, allowing the user to easily type the numbers the Galaxy S5 reads aloud. 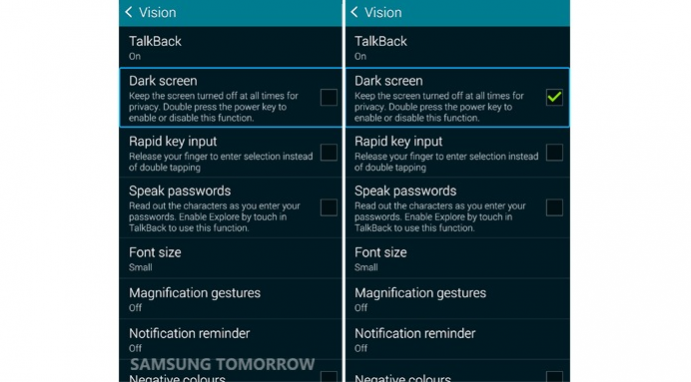 To protect the privacy of people who are visually impaired, the Galaxy S5 allows people to use their smartphones even with the screen turned off.

Thanks to this feature, people with visual impairments can use their smartphones easily on the subway or other public places without the screen being visible to others in their immediate surroundings. The battery power can also be saved as the smartphone is used on a dark screen. 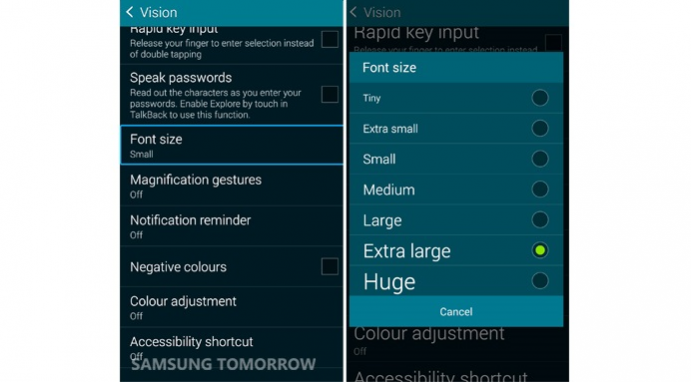 Galaxy S5 offers seven different font sizes, including the smallest, very small, small, medium, large, very large, and the largest. Depending on their eyesight, users can adjust the font size to the most readable size for them. 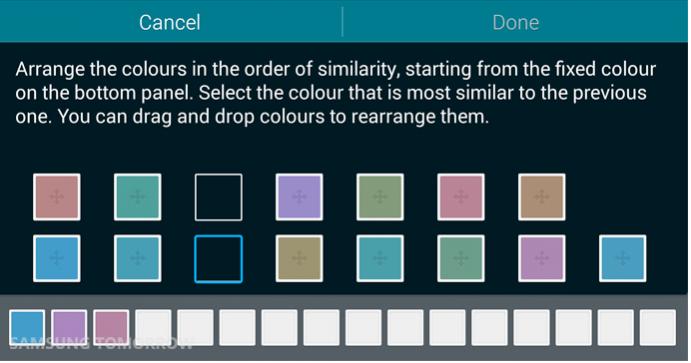 Moreover, the Galaxy S5 provides a feature that detects the color of a pattern and reads it aloud, which runs in conjunction with the Optical Reader that extracts data and texts from images, documents, business cards, and QR codes by using the camera. This feature helps visually impaired people feel and choose colors by themselves, which can be especially helpful with activities such as clothes shopping. 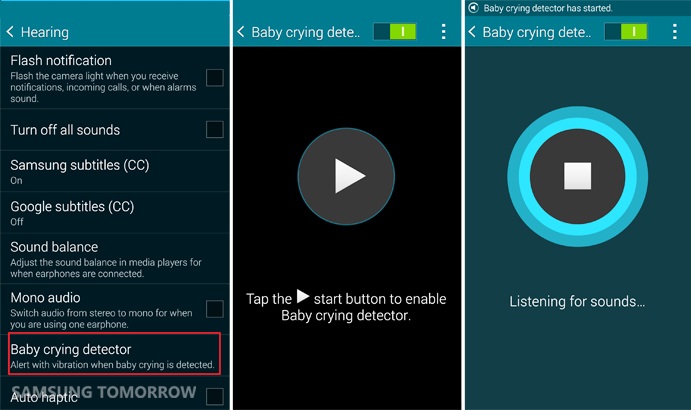 Galaxy S5 detects your baby’s crying and notifies you by vibration. If using with wearable devices, it can be informed by Gear as well. You can set the vibration pattern to be different from that of ring tones or alarm sounds. 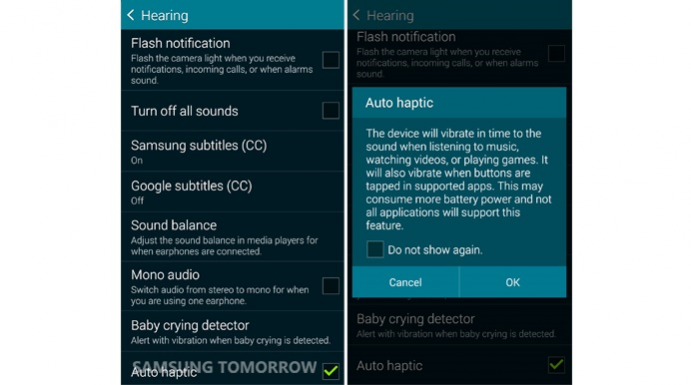 You can feel all the media sounds via vibration. As music, game, or video apps are activated, the sounds are converted to vibration for your three-dimensional smartphone experience. 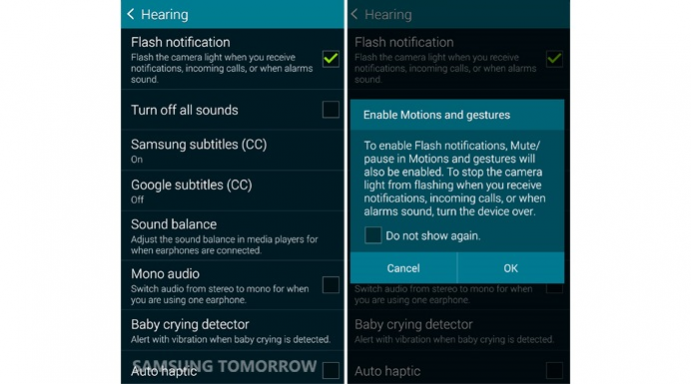 When you receive a notification, call, or alarm, the camera will use a light to inform you.

□ Turn off all sounds 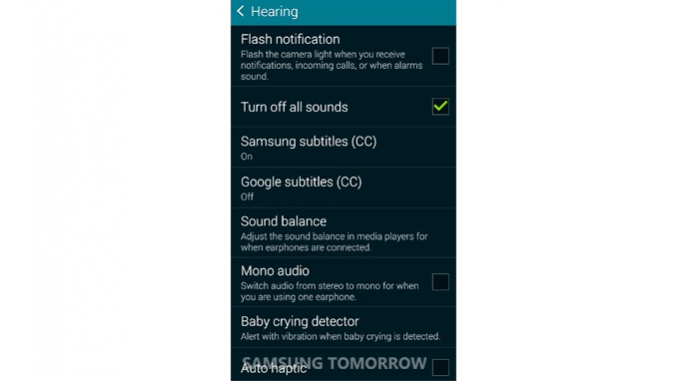 All of the smartphone sounds including incoming call ringtones can be completely turned off with just the click of a button. Whether you are in the library or concert hall, you don’t have to worry about any sounds from your device that are not deliberate.

3. For those physically challenged 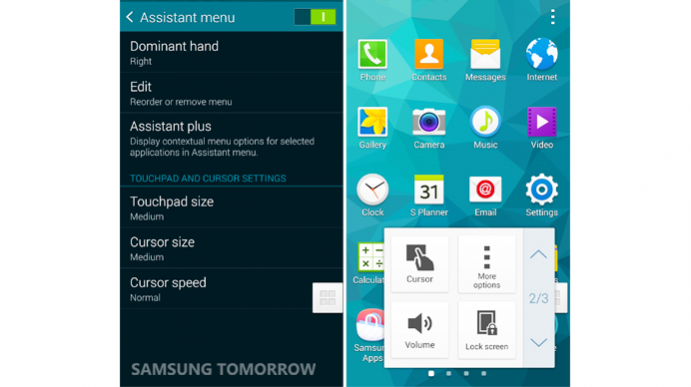 With the virtual mouse pad, you can access your favorite menus more conveniently. You can set which hand you’ll primarily use and customize which apps appear on the Assistant Menu. The size of the touch pad and cursor, as well as the cursor speed, can be adjusted as well.

In particular, when you use the gallery, message, call, or contacts, the Assistant Plus Menu shows you options and a menu of each feature in more detail. 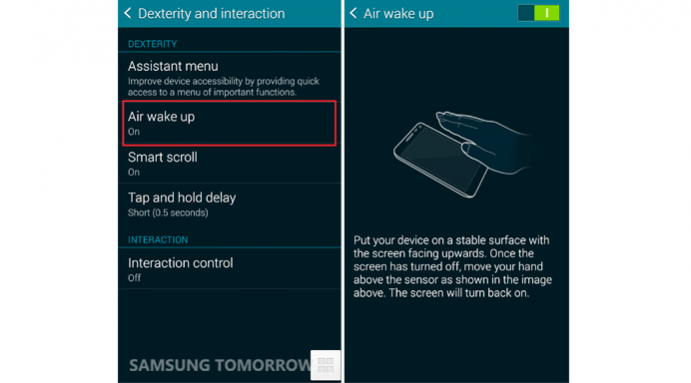 You can turn on the smartphone by waving your hand in front of the screen.

You can select the keyboard input methods that suit your convenience. Touch Screen Input, Auto Display Rotation, Hard Key Function, and more can be turned off to avoid an unintentional tapping or typing. 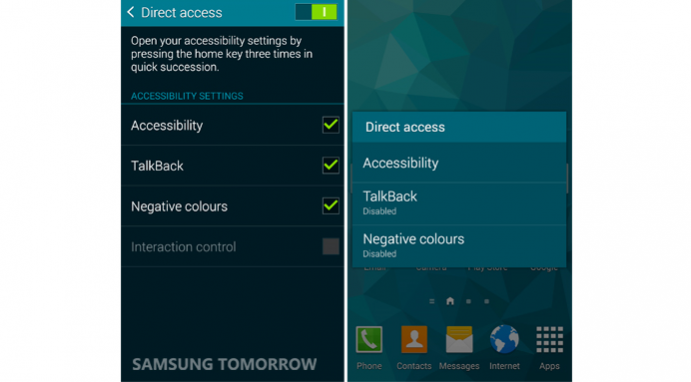 In any screen, tap the Home key three times, and you can go straight to the Accessibility Features that you frequently use. You can set the Accessibility, Talkback, Negative Color, and Input Control to be turned on/off.