An Experience of a Lifetime: Samsung ‘Care for Nepal’

On April 25, 2015, Nepal was devastated by an earthquake measuring 7.9 on the Richter scale. Strong tremors were felt thousands of miles outside Nepal as well. Man was at the mercy of Mother Nature.

The death count has already surpassed 8,200, and the number of people left homeless is mind numbing. The only means of survival for these victims, who are now living on the roads or in relief tents, is a mix of prayers and hope as they look ahead at the seemingly impossible task of rebuilding not only their homes but their entire lives.

Aid and rescue workers have been sent from all across the world. The rebuilding process will take years and governments, NGOs and corporate organizations are doing their best to speed up the process of rehabilitation.

Immediately after the tragedy occurred, Samsung decided that the company must support those affected in this time of crisis. A task force was assembled and planning was quickly underway. This was the inception of Samsung’s “Care for Nepal” project.

A two-pronged approach was to be finalized. The first was to support the affected people by supplying relief materials. The second was to help the victims of the earthquake by setting up communication and convenience centers that utilized Samsung products on the sites of destruction in Nepal.

The team immediately got to the drawing board, mapped out plans and formed an execution strategy. Time was of the essence. None of the team members had any prior experience in pulling something like this off. What every team member did have was a lot of determination, a can-do spirit and resolve; armed with these tools, we made our way to Nepal to execute the project and worked closely with the Samsung team there to convert our plan into action.

On May 4, with support from the Nepal Army, we set up our first camp at Tudikhel, an army-controlled ground located in central Kathmandu where there were about 1,800 people residing in temporary tents. The facility was a combined communication and convenience center which provided the previously mentioned services. 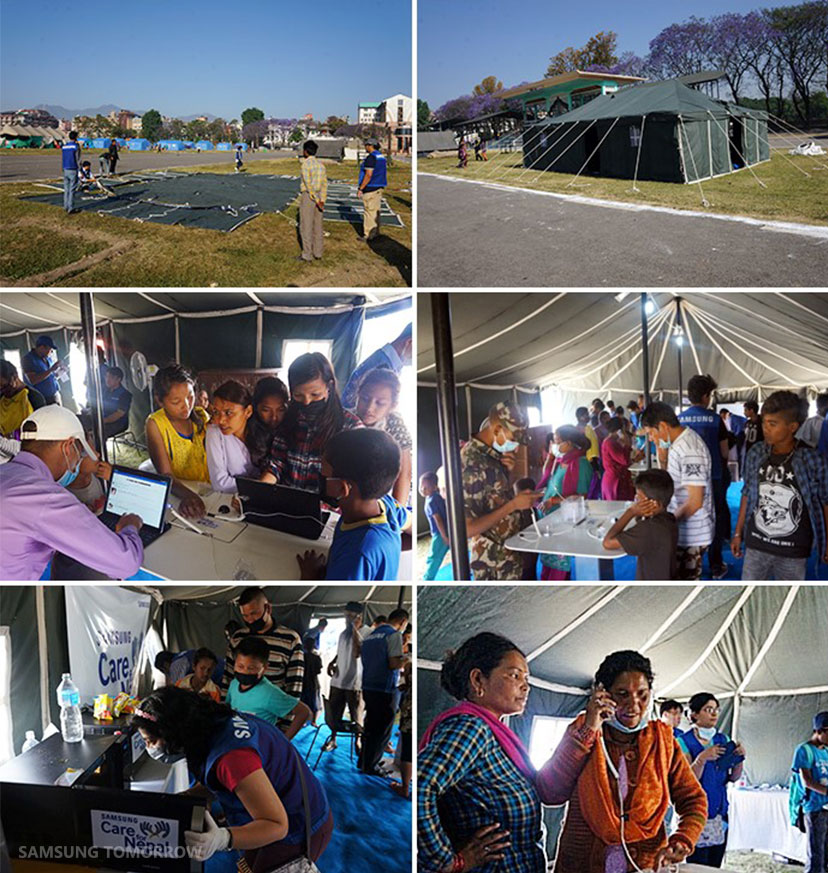 Setting up the camp from scratch included assembling the tent, organizing the layout and furniture, delivering and installing all Samsung products required to run the camp, preparing formats and guidelines for operations and briefing the volunteers who would be manning the camp.  At the end of the day, we were as tired as we had ever been, but even greater than our exhaustion was our sense of fulfillment. We had successfully set up the first communication and convenience center, but our job had only just begun.

We set out on May 5 to prepare the second center in a city named Bhaktapur, a badly affected area about 20km outside Kathmandu. This camp was operational on May 5 and offered communication services to residents of Bhaktapur.

Bhaktapur camp was closed after operating for two weeks since the needs of the affected residents in the area were met. The third center, which was a combined communication and convenience center, was assembled on May 15 in Kirtipur, a town in the outskirts of Kathmandu, and  catered to the needs of affected people close by.

In such difficult times, children are like the bright colors of a rainbow, they are the biggest motivation. They are not burdened like adults might be in this kind of situation; instead, they look towards the future with great positivity and hope. The smiles on their faces can drive every sad thought out of one’s mind.

On May 5, another team which was holding down the fort in Tudikhel saw a surge in the number of children lining up to watch cartoons on TV. An on-the-spot decision was made to prepare a dedicated area where recreational facilities would be provided to children. A recreational center was thus set up and the children absolutely loved it. So did the elders, who had been itching to catch up on the latest news. Daily activities, such as soccer matches and drawing competitions, are being held to engage and entertain children here.

After setting up three stationary facilities, the Samsung team felt that there should be a change in approach. There were areas more affected in far-off locations, but due to the conditions of these areas, setting up stationary camps was not advisable. Hence we planned to set up mobile communication centers in vans that could house all the equipment necessary to operate a communication center. These vans would be able to reach a different location every day, thus providing assistance to inland areas where few aid workers had been able to previously reach. Two such vans were set up and operated on predefined routes in upcountry locations.

Every day was a new learning experience for us. Many improvements had to be made on site to better assist the earthquake victims and to make the operations smoother for Samsung. Volunteer teams have since been traveling to Nepal from India on a weekly rotational basis to support this initiative and are working closely with Samsung Nepal to execute the project.

This project, carried out by team Samsung, has been well received by the local people who are using these facilities. Additionally, the media, the Nepal Army and the Chief District Officers of Bhaktapur and Kathmandu have visited our camps to show their appreciation for the efforts taken by Samsung.

These camps and mobile vans ran at full capacity on a daily basis and touched thousands of lives. Currently, there have been over 10,000 calls made, more than 7,200 phones have been charged and hot meals and cold water have been provided to over 4,500 people at these facilities.

We are extremely fortunate to have been given the opportunity to be a part of such a project. As we looked into the desolate eyes of hundreds of people, it dawned upon us that we place great importance on things in life which are perhaps not important at all. What matters most are love, trust, compassion and relationships. What matters is the need to rise above the petty issues that we burden ourselves with. To do something because we want to do it, not because we have to do it. To dream and dare to try to fulfill that dream. To let go of inhibitions and make the most of the precious gift of life. And, above all else, to join our hands so that we might do something good for people in need. 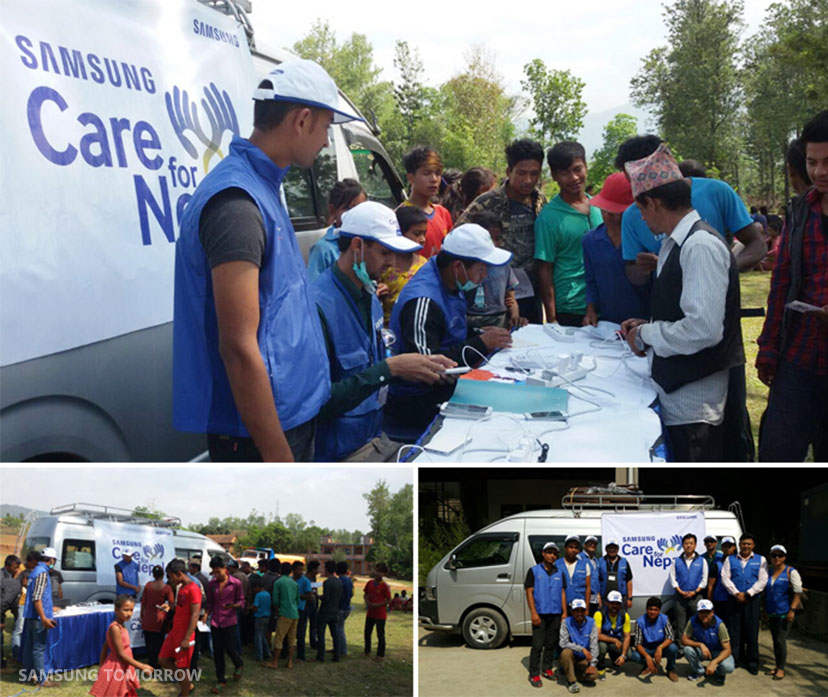