It all started with a note attached to a wall near Samsung Digital City. It said a kitten was in the local vicinity. It was sick and needed someone to recue it. The temperatures in the city were high, making it difficult for a young cat to survive without its mother and proper care. When Samsung employee Yura Gim saw the note, she knew there was a chance it was a hoax, but as a cat lover herself, it’s a chance she didn’t want to take. The kitten had to be found.

Continue to read the full article (967 words) below or jump to the summary here. 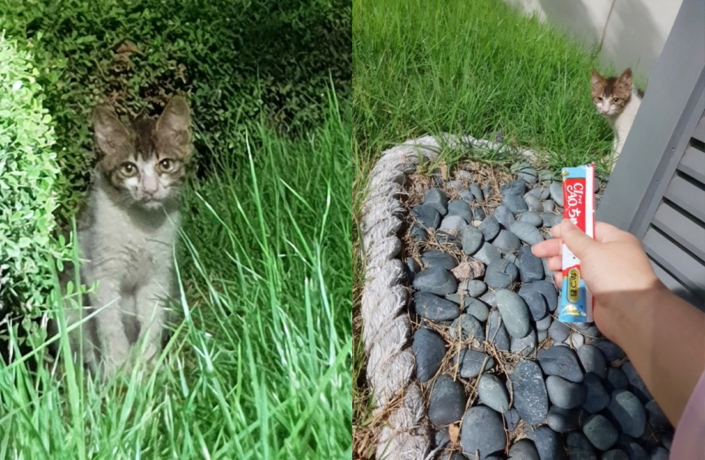 Gim, armed with a cat snack, attempts to keep the kitten in place until the rescuers arrive

Gim caught a glimpse of the kitten the same day – 40 minutes later, in fact. She waited around long enough during her lunch break to find the kitten called NyangNyang – the Korean equivalent of ‘meow meow.’ She saw something furry in her peripheral vision and knew it had to be the kitten. 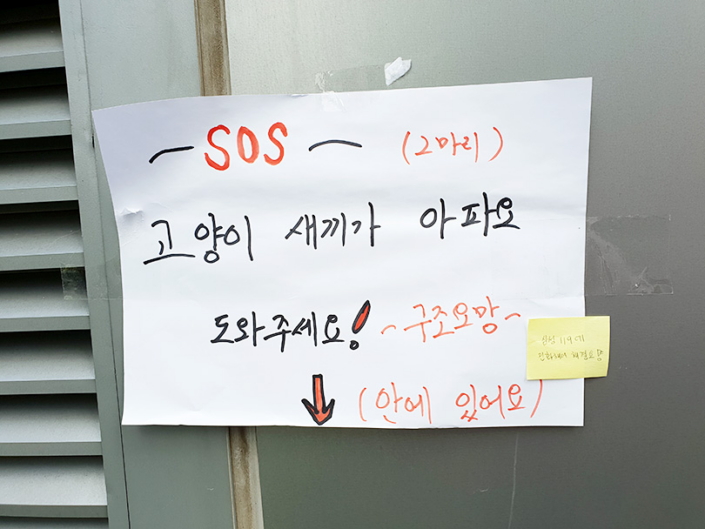 The memo that started it all: “Sick kitten. Help”

It turns out the note was written by a worker in a nearby cafe who wanted one of the campus’ workers to help rescue the cat. And when Yura Gim first saw NyangNyang, it was clear to see why a rescue mission was proposed. Even from a distance, it was clear to see that NyangNyang was sick. One of its eyes were closed due to problem it had developed and its fur was matted and unkempt. It even looked spiritless by the way it was sat down. There was no alternative – NyangNyang had to be helped.

And so the mission started in earnest. Gim already has a cat of her own and denying a feline rescue was out of her comfort zone, especially for one so young and ill. She decided to bring in reinforcements – namely, her Samsung colleagues. Yura Gim works in the Marketing Group of the Networks Business at Samsung Electronics but she knows the broad skill sets that reside within the four walls of Digital City. To get the best help for NyangNyang, this became a crowd-sourced mission to save the cat. 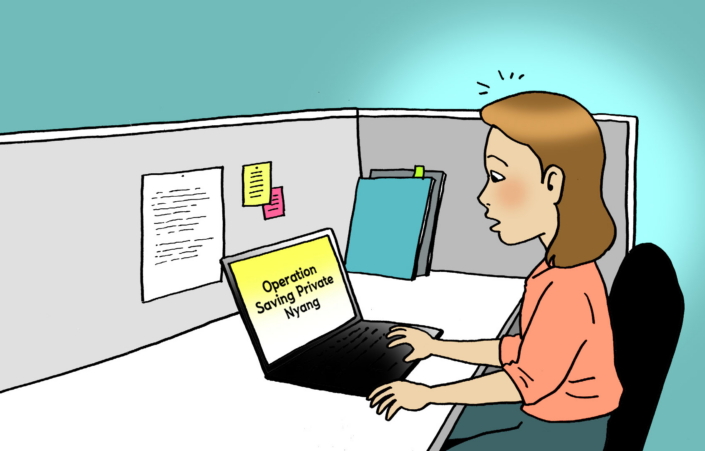 Gim turned to the internal communications platform to seek help

Yura Gim turned to the internal Samsung communication system Live Talk to ask for help and what she received was encouraging. She was already getting replies within five minutes. ‘I want to help,’ said one. ‘Let’s save the cat together,’ said another. ‘I want in if you raise a fund for the cat,’ said a third. It became a community project driven by Yura Gim, who became known as ‘Meow Butler’ for the amount she cared about NyangNyang’s wellbeing.

Another Meow Butler soon joined the fray. Donghoon Oh develops hardware for the Networks Business. “I decided to help rescuing NyangNyang because the kitten was sick and had no protection from its mother,” he said. “Other baby cats are protected and cared for by their mothers, but NyangNyang was going to die if we did not save it.”

The next step was to open up the community of potential helpers wider still. Gim opened a public chat room and just as with the Live Talk conversation, she was getting replies quickly. Within 30 minutes, people were sharing their cat rescue experiences and giving advice for rescuing NyangNyang. But the cat was still at large. Although there had been numerous brief sightings of NyangNyang, no one had been able to rescue it because it was so shy and elusive.

That all changed when Yura Gim went in search of NyangNyang armed with a cat treat to lure it out of hiding. It was around 8pm and the sun had set. Yura Gim decided to head towards the Hanmaum Health Care Center where NyangNyang had been spotted previously. By sheer luck, she spotted the kitten. 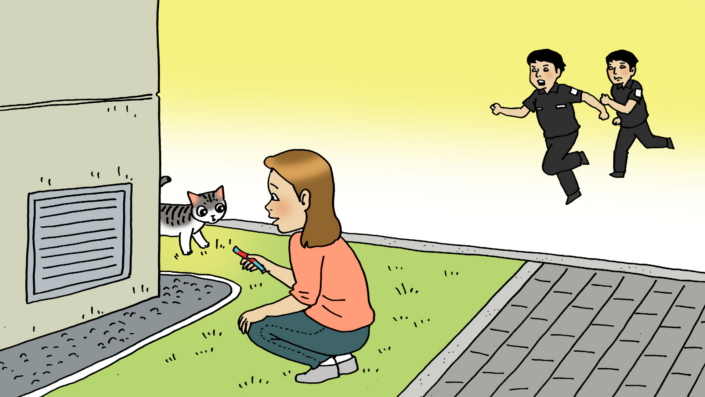 3119 rescuers, emergency responders for Samsung Digital City, rushed to the scene upon receiving the call

NyangNyang finally came out of hiding and still looked very sick. It was also being cautious while coming forward to take the treat from Yura Gim. Another stroke of luck meant that local 3119 rescue personnel were nearby.

“The baby cat ran away towards the back of some plastic boxes,” said one of the rescue team. “I pushed one of the boxes to the glass wall and managed to trap the kitten. When we finally rescued it, its nose was running yellow mucus and it was making a gurgling sound every time it breathed. There were many scars around its nose and one of its legs was bleeding.” 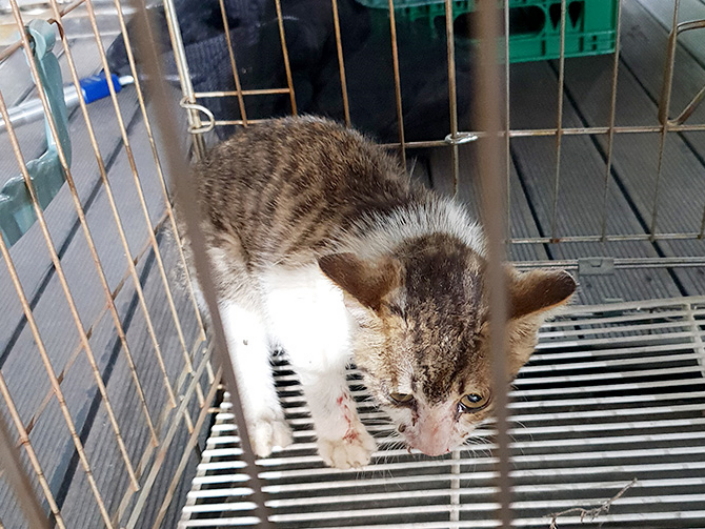 Members of the “Saving NyangNyang” community were concerned about its health

The good news is that after NyangNyang was rescued, it was in the right hands and was able to be professionally treated and cared for.

It was at 8.30pm on July 18 when NyangNyang was finally rescued. Thanks to the contributions of the well-wishers in the chat room, NyangNyang’s hospital fees were raised quickly. It turns out that Sang in Baek of the Environment Safety & Health Group, one of the 3119 rescue personnel, was a member of the chat room. The timescale from Gim first finding the note to NyangNyang receiving treatment was just 34 hours. 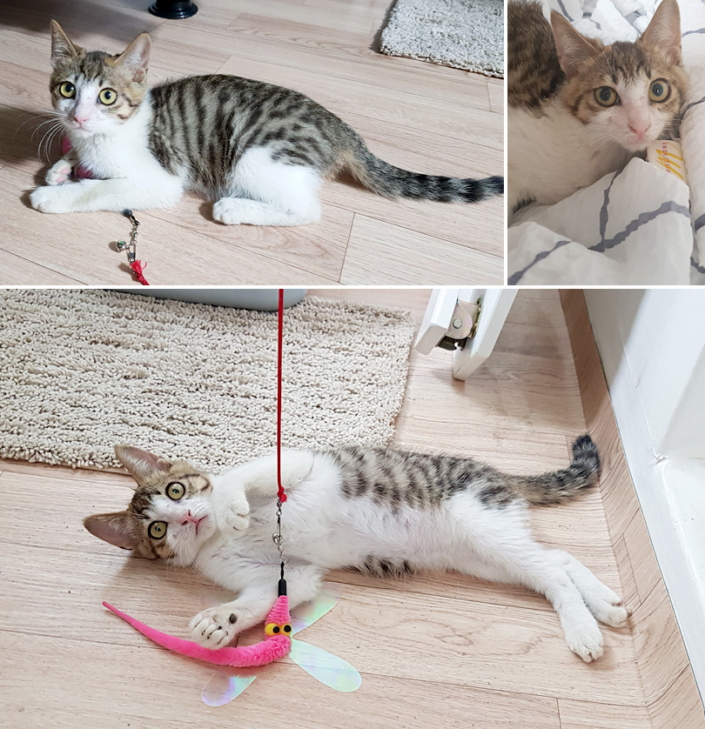 NyangNyang now lives temporarily with Ju Hyeonji of the Software Engineering Lab, Digital Appliances Business, who heard the story of NyangNyang from her team colleague and decided to become a foster caretaker of the kitten without hesitation until it finds a permanent home.

While living with Ju, NyangNyang has recovered very quickly. At first, the baby cat would not come out from the corner, but now it is playing, eating and sleeping as much as it wants. The inflammation on its eye was cured in just a week and the cold symptoms disappeared as well. Its weight has increased by 400g. In the past, the kitten was dirty and powerless, but now it is a mischievous little kitty cat.

NyangNyang now lives a new life because of the people who devoted their time, money and efforts to saving it. NyangNyang did more than it ever realized. It brought people together for the common good of saving a sick kitten. It was only after the rescue had taken place that the people from the chat room met for the first time. 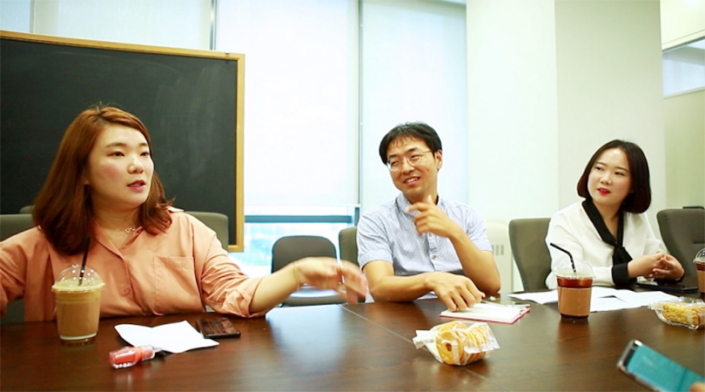 “Nobody in the open chat room knew each other,” said Yura Gim. “We trusted each other, anonymous individuals, to save this small baby cat.”

The chat room still exists today, with many of the people choosing to remain members of it. If nothing else, it’s a reminder of what happens when people work together as a collaborative team to do good for others. 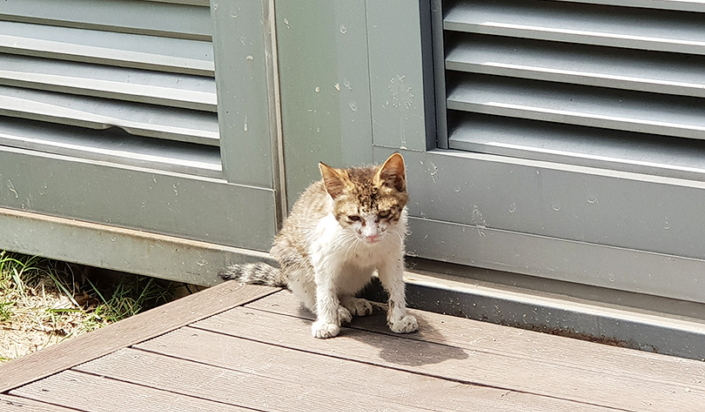 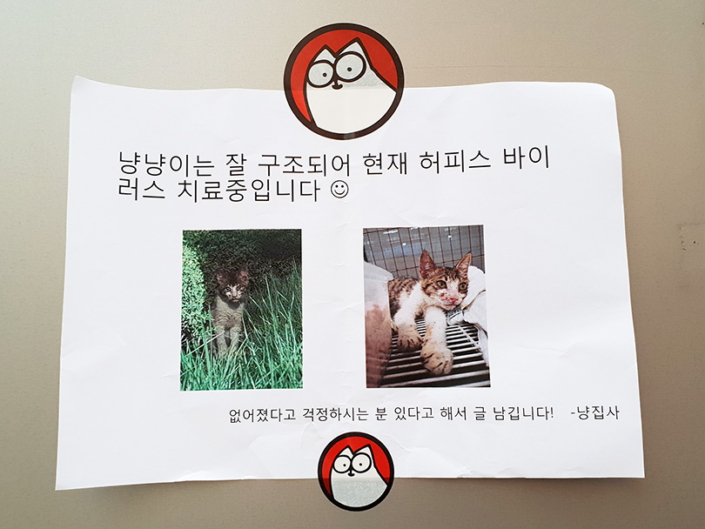 A note was posted, where the initial SOS memo was posted, sharing NyangNyang’s updated status, relieving passersby and other concerned parties of their worries