Samsung SmartThings is an open Internet of Things (IoT) platform that was brought to life by a multitalented team of seven cofounders with a knack for developing. It wasn’t long after the founders envisioned SmartThings that it became a reality. In fact, in just one month, SmartThings raised $2 million from over 5,000 backers on Kickstarter in 2012. Proving traction even without sales, it became clear that others believed in the start-up’s vision. Samsung Electronics, too, saw the potential of the platform, and acquired it last year. The IoT platform is currently compatible with more than 200 devices, a number that is continuously increasing thanks to the efforts of the more than 15,000 developers involved in the SmartThings community.

Relying on this growing community to refine and enhance the platform, the SmartThings founders have persistently reached out to and fostered developers to continue to expand the ecosystem. Ben Edwards, cofounder of SmartThings and Vice President of Community and Developer Advocacy, leads this initiative, and works to engage with and advocate for individual partners, developers and developer enthusiasts.

His work recently brought him to Seoul for IoT Week Korea 2015, where he spoke to developers about the SmartThings platform, as well as the company’s aspirations for IoT. During his trip, Edwards sat down with Samsung Tomorrow to discuss the importance of developers, the current state of SmartThings and the unlimited possibilities of a more connected world. 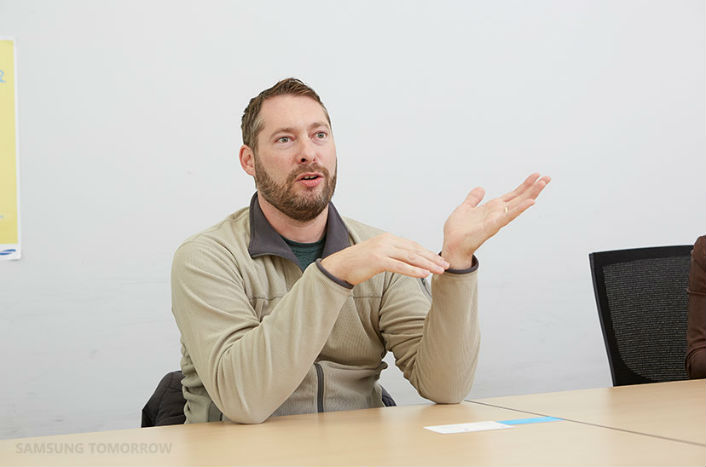 Connected Chairs and Talking Tables: The Near Future of IoT

The developer community, Edwards believes, is essential to the success of the ever-expanding ecosystem, and open IoT platforms like SmartThings make it easy for developers to get involved.

Although it might not happen immediately, object manufacturers, such as furniture companies, for example, are understanding that this level of connectivity, though it may seem novel at the moment, won’t be so unconventional a decade from now. Edwards used the example of a smart dining room table to illustrate how this may be possible.

“Imagine, a table display pops up that is unique to what I’m interested in because it knows that I am sitting here. Across the table in another seat, the display might show something different. Or, maybe there’s not a display at all. But the table knows that I have to catch a certain metro train, so it might notify me that it’s time to leave,” he stated, noting that the technology already exists, even though the use cases may not.

As such, Edwards encourages developers to envision what the future trends of IoT may be to better equip evolving platforms. “Developers shouldn’t focus on simple applications or devices but rather service platforms like SmartThings,” he added. Users and developers can easily create functions for the platform, enabling the advancement of the platform itself. These kind of activities will become more common as IoT expands.

Grasping the Opportunities of an Omnipresent IoT

Although there are many ways IoT will offer value to consumers in the near future, home automation still has a way to go. Part of this has to do with technical hurdles, and part of it has to do with the fact that some people who may not be enthusiasts or early adopters of technology might be a bit hesitant about it.

Edwards compares the dawn of IoT to the advent of smartphones, as many consumers were not immediately able to recognize the need for the technology at that time. Over the past couple years, however, smartphones have rapidly become so ingrained in our everyday lives that it has become difficult to function without them. In this way, IoT will rapidly become an essential part of life, as consumers will quickly recognize the convenience of IoT, just as they did with smartphones.

Increasingly, IoT will move beyond spaces like the home, across market verticals, and will eventually be present just about everywhere, Edwards claimed. “When I walk up to a take-out restaurant, the menu might rearrange itself based on my preferences, or the things I generally like. Or make recommendations based on the dishes that I’ve eaten and rated before.”

SmartThings remains devoted to developing relentlessly to best prepare for a future that isn’t so far away, and will continue to cultivate its relationships with developers around the world to enable an IoT of unlimited possibilities.