Powered by faster chips, beefy graphics cards, and enough RAM to game like a console, modern smartphones have become more like laptops in our pockets. Designed for those that want to do more, the Galaxy Note9 pushes the envelope further, featuring the latest and greatest chip sets, up to 8GB RAM, and a 4,000mAh battery.

But with all that power under the hood it takes some engineering magic to make sure that all the components stay cool while you’re gaming or doing some intense multitasking. Samsung has innovated smartphone cooling on the Galaxy Note9 with its all-new Water Carbon Cooling system.

Water cooling first debuted on the Galaxy S7, but Galaxy Note9 improves both the capacity and efficiency of smartphone cooling. So how did we make it happen? We’ll let our engineers fill you in on the details with notes from the creator’s lab.

Making phones with batteries that can last all day and play console-quality games comes at a cost: heat. When a phone’s internals become too hot, the CPU slows down – a problem known as thermal throttling – and leads to a loss in performance. Sluggish gameplay and poor multi-tasking are two major problems that a good cooling system addresses.

The Galaxy Note9 had an ambitious set of goals. We wanted to create a phone with a battery that could last all day, provide a PC-like experience with Samsung DeX, and handle graphic-intense games like Fortnite. That meant putting in a 4,000mAh battery and the latest 2.7GHz mobile processor, which would challenge the phone’s performance. The new cooling system needed to be both faster and more efficient than previous generations.

When we launched the Galaxy S7, we introduced a new type of water-based cooling into our phones. It used a porous thermal spreader filled with water, which absorbed the heat and turned into steam and then carried the heat away through a pipe. Once the heat dissipated, the steam condensed into water again. This system was the blueprint for the Water Carbon Cooling system in the Galaxy Note9, but we wanted to make it bigger and more efficient.

The most difficult part of improving the cooling system was to make it more efficient. The original system was thin and used two Thermal Interface Materials (TIM), one made of highly conductive carbon fiber, to transfer heat away from the processor. Our answer was to add a layer of copper between the two TIMs, making it possible to transfer more heat between the two materials for more efficient heat dissipation. We also engineered a wider thermal spreading pipe, coming in at 350mm3 compared to the Galaxy S9’s 95mm3, to dissipate heat over a wider surface area. 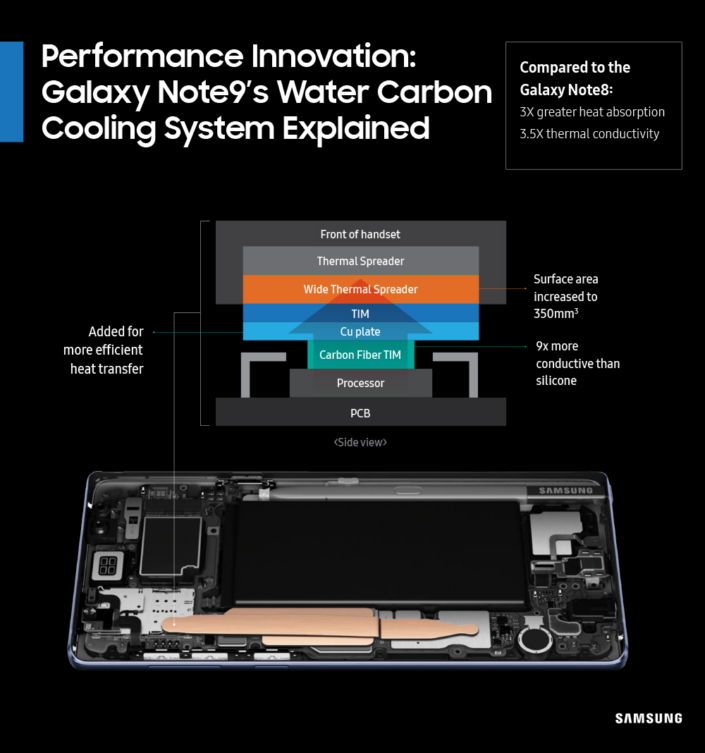 Thanks to the improved Water Carbon Cooling system, the Galaxy Note9 can effectively manage heat generated from its powerful processor. With the wider thermal spreader and enhanced Carbon Fiber interface, the cooling system conducts and transmits heat efficiently to the surface of the device, allowing the Galaxy Note9 to operate at peak performance consistently. When compared to the Galaxy Note8, the upgraded cooling system’s heat absorption is three times greater and the thermal conductivity is 3.5 times higher.