Creating Accessible Technology for All to Easily Utilize

Accessibility may not be a commonly used word, but it is quite a familiar term for developers who work for technology companies like Samsung Electronics. At core, accessibility means providing the same opportunities to everyone, including, for example, people with disabilities, children, women who are pregnant, and the elderly, in using technologies and products without inconveniences. Samsung’ developers apply various technologies to ensure accessibility, by listening closely to the feedback of those with disabilities, and developing tests so they can directly experience the inconveniences themselves.

In this article, Samsung Newsroom introduces technologies which Samsung is developing to provide accessibility for “anyone and everyone,” and have the potential to dramatically help those with disabilities, the elderly, and many others. 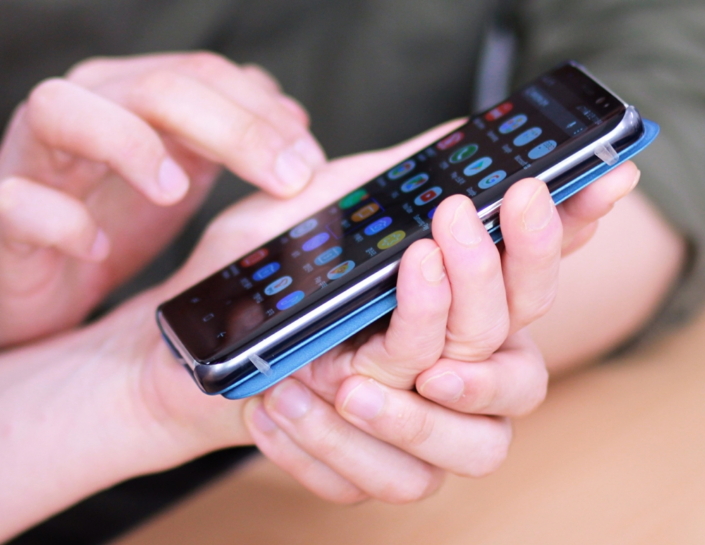 A Samsung Electronics “Smart Angel” volunteer is guiding a person with an impaired vision how to make better use out of a smartphone.

With mobile devices being essential to so many activities in daily life, Samsung has also focused on equipping its smartphones with more specific accessibility features including high-contrast features for smartphones. Also, this year, Samsung’s new Galaxy S9 and S9+ smartphones have added three new high-contrast keyboards, for a total of four, and also support High Contrast Mode for the Internet App to satisfy the growing needs for accessibility.

Galaxy smartphones provide many accessibility features for visibility, hearing and dexterity. The Voice Assistant describes what you touch, select, and activate through spoken feedback, and allows visually impaired users to edit text or change settings with familiar swipe and tap gestures. The smartphones can also aid those with hearing impairment by catching the sound of a doorbell ringing or a baby crying and notifies the user through visual cues and vibration. Users can access features on their smartphones by giving voice commands or simple motions. 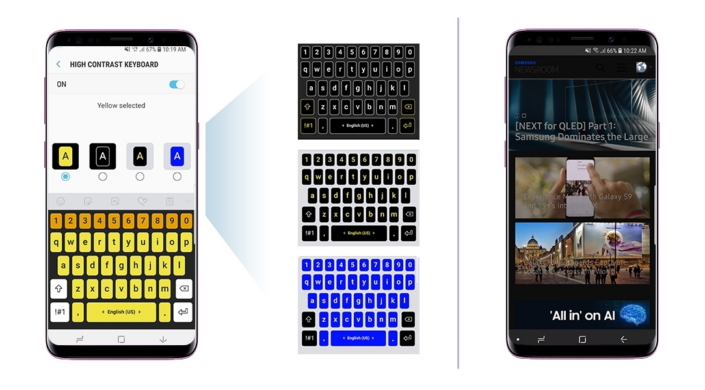 Samsung DeX connects a smartphone to a larger display and provides better navigation for people with limited mobility or vision. Bixby assists even further. Visually impaired people can easily identify an item in front of them with Bixby Vision, which uses the phone’s camera app to relay information about one’s surroundings. Bixby Voice also eliminates the need to go through multiple steps to accomplish a mobile task, allowing users, for instance, to dictate and send a text to a friend or check their daily schedule with a simple voice command.

“Because the Galaxy S9 can transcribe what I would like to say in a message, I can save a lot of time and energy by not having to type it. In this way, Bixby instills in me a sense of confidence when communicating with others,” said Gwangman Moon, who has impaired vision.

Fundación ONCE, the National Organization of the Blind in Spain, recognized the Galaxy S8 as “a device that is properly equipped for visually impaired users” in July last year. Inho Baek Samsung’s Mobile Accessibility UX Designer, received the Human Rights Award 2017 by the Korean government as a recognition of his efforts to provide improved accessibility.

Samsung has already introduced accessibility functions to their TVs, including a high-contrast feature for background and text, and voice feedback of features on the TV and remote control. Thanks to these efforts, Samsung has been awarded CES Innovation Awards in the Accessible Tech category for four consecutive years since 2015.

In 2018, Samsung further upgraded the accessibility functions of its QLED TVs and UHD TVs. Now, users can adjust the colors of the menu in line with their vision, and interchange the color of the text and background between black and white, and use an industry-first function to adjust the location of the subtitles on screen. Another standout feature is the “SeeColors” app designed to help the 300 million people living with color blindness around the world, and developed in collaboration with the Budapest University of Technology and Economics. The app recognizes the color vision deficiency level of a viewer, and then automatically optimizes the colors for the user.

“We will continue our research and development of accessibility features in our TV development, so that everyone can enjoy an optimized viewing experience,” said Jonghee Han, Head of Visual Display Business, Samsung Electronics.

Bixby for easier use of home appliances

This year, Samsung has embedded the Bixby voice recognition feature into its new home appliances, including Family Hub refrigerator in Korea and the U.S. For instance, you can just ask “Hi Bixby, what’s new today?” and the Family Hub will provide a read out of the news, weather and calendar updates specifically tailored to the user.

Samsung also was able to provide 150 washers and dryers, including FlexWash powered by Bixby, to the athlete’s village of the PyeongChang 2018 Paralympic Winter Games in March, to further share its recent innovations in accessibility with the wider public. 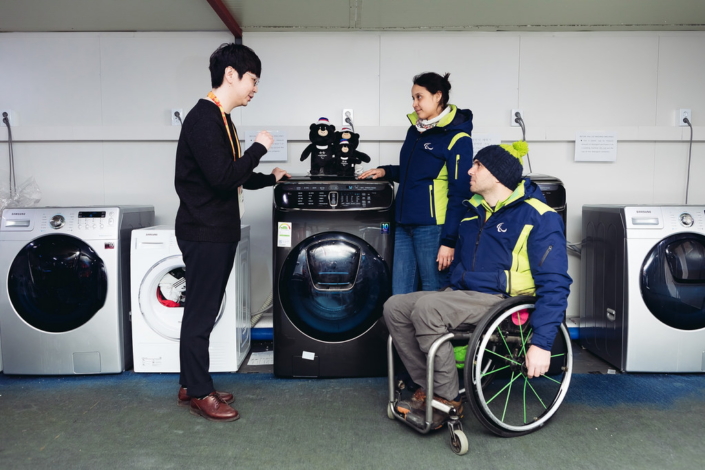 A member of the International Paralympic Committee (IPC) is testing out FlexWash that improved accessibility with AI technology at the athlete’s village of the PyeongChang 2018 Paralympic Winter Games.

A visually impaired individual who tested the FlexWash at home during the development process said, “While laundry may be a simple daily task for others, it can be difficult for those with visual impairment. With FlexWash, I was able to do laundry on my own for the first time in my life.”

Samsung’s home appliance technologies hone in on detail to provide greater accessibility. For instance, the Family Hub provides features including Black and White, Menu Color Conversion, and font size adjustment, to cater to those with visual impairments in the U.S. The devices also provide spoken feedback about the features of the device or the buttons on the remote control. This year, the home appliances were also upgraded to produce a different sound effect upon activating each function. For example, now people with vision impairments can monitor the temperature level of the refrigerator, or different laundry cycles of a washing machine through different sound effects.

Samsung will actively apply IoT and Artificial Intelligence (AI) technologies in future launches to provide improved accessibility and allow devices to activate the most suitable features for every user.

Samsung’ Digital Appliances Division invited a volunteer panel of users with visual impaired people to the HeX Lab* in its Seoul R&D Center, to hear about their inconveniences when they use digital appliances in daily life. The division continues to improve accessibility by engaging and listening to the feedback of organizations supporting those with disabilities every month, and is also undertaking joint research with Korean universities related to development of accessibility.

Every year, Samsung’s TV developers also conduct tests with groups of people with disabilities and experts in order to reflect their opinions during development. Often, Samsung employees with disabilities also participate in development and tests for accessibility features to provide their feedback. 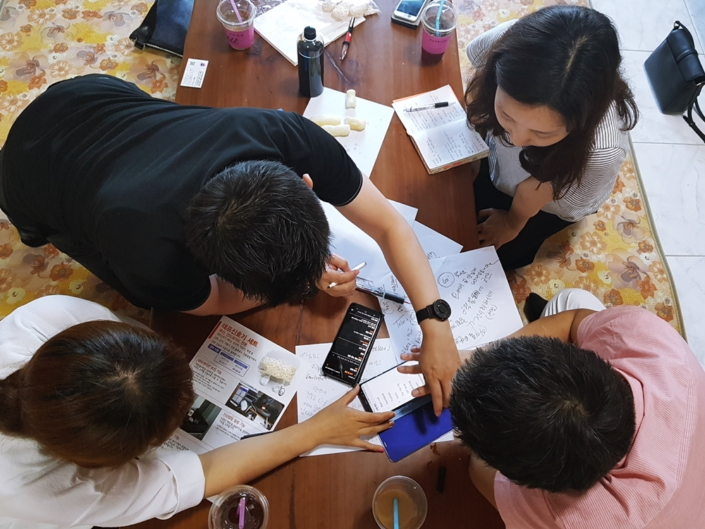 Since 2016, Samsung’s Mobile Division has also sponsored the “Samsung Supporters” program to communicate with users with disabilities in order to improve accessibility together. In addition, Samsung gives presentations about accessibility feature regularly, and is conducting “Smart Angel” volunteer activities for the fifth year this year to guide visually impaired users how to make better use out of smartphones.

“I feel proud to be able to contribute to the improvement of smart device accessibility,” said an ambassador with impaired hearing. “I’ve learned a lot about accessibility through communicating with Samsung, and now I’m also sharing with others how to better use these features.”

*The research lab is built similarly to mimic a real home.

**Disclaimer: The functions or features mentioned in this article may vary according to product type and region.