Following the launch of the Galaxy S6 edge+ and Galaxy Note5 at Samsung Unpacked at Lincoln Center in New York—a first for the trendsetting event—the fun and excitement continued at an exclusive reception at the Samsung Galaxy Studio. 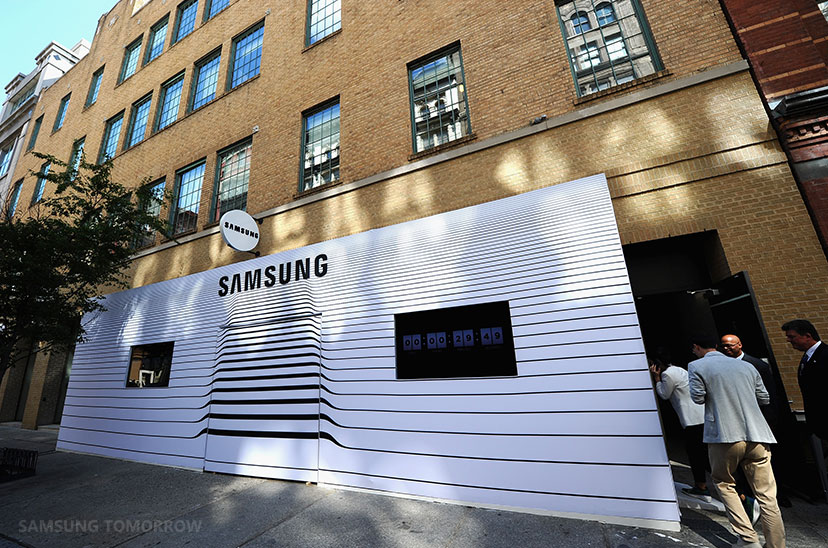 Situated in the chic neighborhood of SoHo, the center of the city’s fashion scene, the studio was the perfect setting to celebrate the new releases as well as the launch of Samsung’s fall lookbook, a fashion-forward campaign created to introduce the latest products in a unique way.

Upon entering, attendees were each given a copy of the lookbook, an eye-catching, magazine-like publication chock full of gorgeous, glossy spreads in bright colors and modern designs that highlight the features of the Galaxy S6 edge+ and Galaxy Note5. The book was a collaborative effort of the industry’s biggest tastemakers including Creative Director Stephen Gan, editor-in-chief of V Magazine. 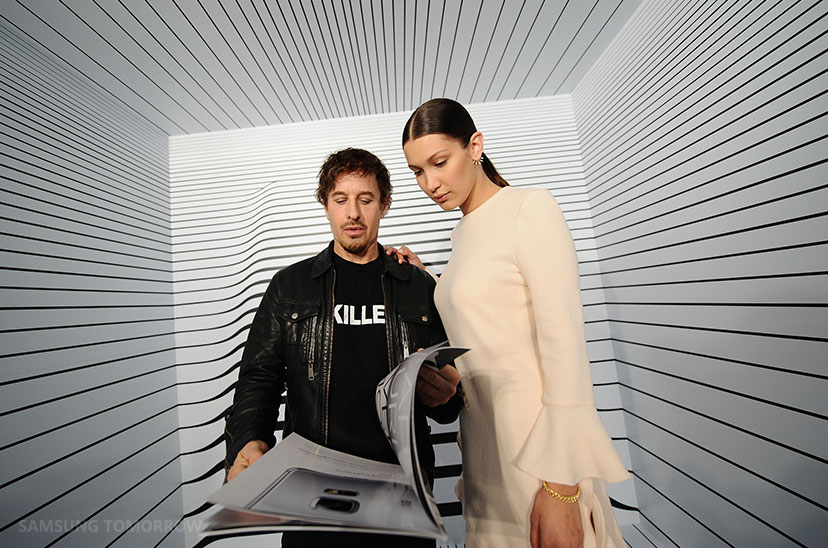 Gan was inspired by Samsung’s features and functionalities that evoke the incredible range of human emotions and, as such, aimed to capture the feelings that powerful technology, be it an email or an emoticon, can spark, along with the incredible features of the phones themselves.

After flipping through the pages of the book, which exhibits captions such as “Next is Passionate,” “Next is Ecstatic” and “Next is Bold” alongside striking photographs that portray each of the emotions, it becomes obvious that Gan was successful in meeting his objective. That success was also due in part to the efforts of photographer Steven Klein, contributor to Harper’s Bazaar, as well as internationally renowned fashion models Bella Hadid and Xiao Wen Ju. 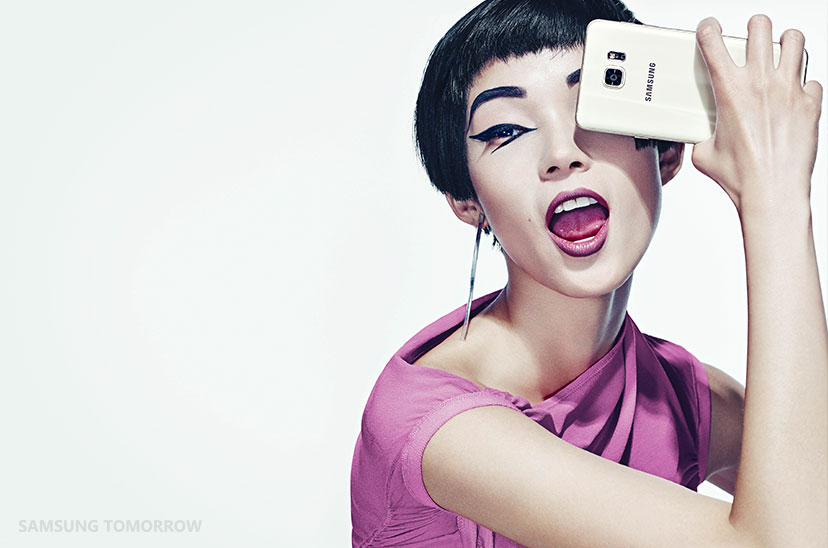 Nearby, crowds of guests gathered in the modern studio space and chatted over cocktails and hors d’oeuvres as they admired the contemporary interior and décor that tastefully incorporated Samsung’s innovative products.

The well-dressed attendees donned the latest looks, but in addition to their clothes, the most popular accessories seemed to be digital devices, which guests used to discuss, photograph and share the event. The fact that the reception was themed around this very concept was no coincidence, as fashion and technology have been deeply intertwined in recent years, constantly inspiring and emulating each other in design, recreating and revamping again and again. 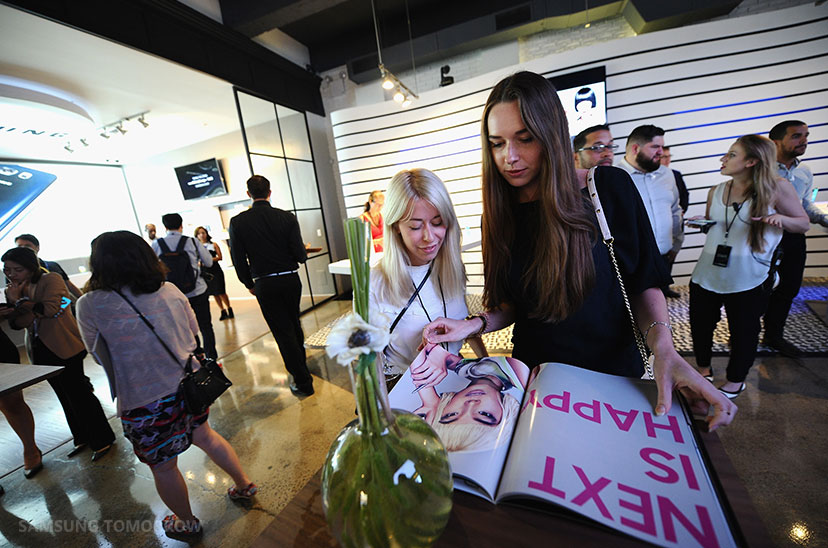 Dennis Miloseski, Head of Studio, Samsung Design America, noted this in his welcoming remarks, stating that the smartphone has become the “ultimate accessory,” in that it not only connects us with others, but plays a central role in how we express ourselves. The innovative features of the new Galaxy S6 edge+ and Galaxy Note5, including improved video and camera systems, the dual edge display of the Galaxy S6 edge+ and the creatively-driven S Pen of the Galaxy Note5, showcase this truth.

Later on, the lookbook team was invited on stage as the publication’s high fashion photographs were displayed on the screen. After doting on the features and congratulating one another on a job well done, they raised their glasses to the crowd in a toast.

Technology for a Fashionable Lifestyle

The DJ picked up the tempo once again and, as music blasted throughout the room, the guests dispersed, each eager to be the first to get the chance to try out Samsung’s brand new products.  Among them, lookbook cover model Bella Hadid was seen clutching her own Samsung device, and was quick to point out her favorite Samsung features.

“Both the Samsung Galaxy S6 edge+ and Note5 are incredible devices, but I particularly love the S6 edge+. When traveling, I always watch movies on my phone so the big screen is definitely a huge plus. I’m also a fan of the awesome camera and editing features since they make sharing my life on Instagram so much easier!” she noted.

Because of his passion for photography, Klein, too, favors Samsung’s smartphone cameras, not only for the true-to-life color rendition and 4K capacity that allow him to excel professionally, but also because the smartphone camera helps him to better express himself and his emotions when connecting with others.

He is also a big fan of the portability features of the S Pen, stating, “I love the pen because whenever I have to do retouching on a photograph, I usually have to wait for the print and then write out my notes by hand in the studio with my assistant. Now, it gives me a lot of freedom to be wherever I want to be. If I have a photograph and I need to change the way it’s printed or make notes on a storyboard, I can do all my retouching no matter where I am.”

The Unpacked reception wrapped up with a few media interviews and quick photos of the campaign’s stars, while guests noted the release date of the new devices (August 21 in the United States).

The reception was both a success and a reminder that Samsung remains a true force of fashion that strives to stay ahead of the curve with its distinguished devices, cutting-edge technology and unprecedented device categories and designs. Like fashion, Samsung technology is always evolving and improving and will continue to inspire many industries in the future.