“The average time a product has to attract a consumer’s eyes is 0.6 seconds. If the product cannot make the customer stop during that short period, we cannot win them over.” – from a Samsung Electronics Milan Design Strategy Meeting, 2005

The core value driving Samsung Electronics Digital Appliances has always been thoughtful design. Samsung strives to create products that will have a meaningful impact on the way we live by taking the time to understand what matters most to people. Understanding the needs of consumers is the first step in the design process.

With a firm belief that great innovation begins with understanding the needs of people, Samsung considers every possibility, from even the smallest changes, that could improve daily life. Beautiful design still fails if it is inconvenient. True design happens when it makes life easier. 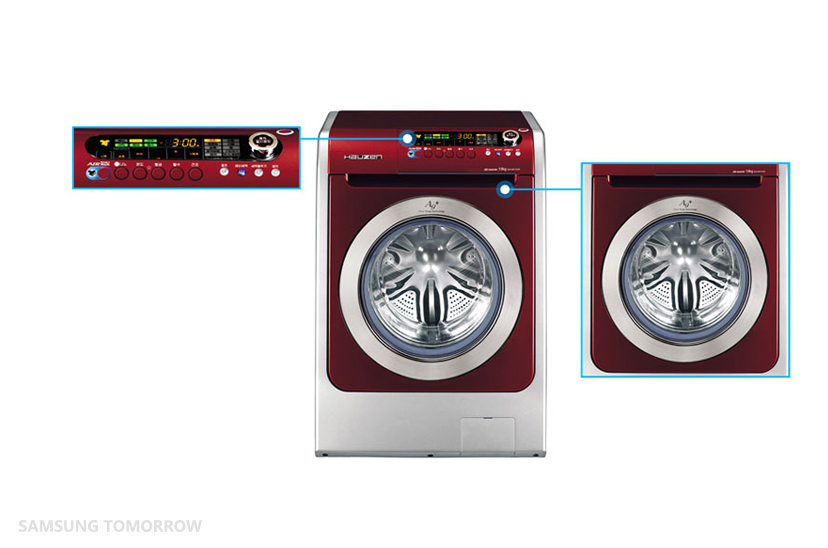 In 2006, Samsung introduced its Hauzen Drum Washer, which went through design innovation, allowing users to easily view and operate the machine without bending over. The height, angle and design of the control panel were optimized to allow users to see the wash cycle progress from a distance. These deliberate design features helped it gain huge popularity.

The back-friendly door was square and opened nearly the entire front of the washing machine. The door handle was placed right under the control panel and opened easily without bending. Due to the machine’s large square opening, loading and unloading laundry was easier than before. Every operation of the machine could be completed while standing. 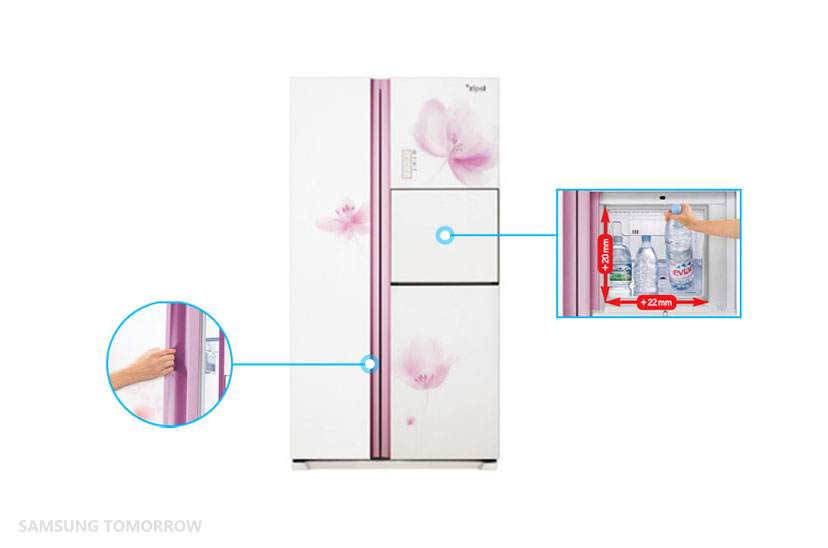 With a focus on aesthetics and effortless integration, the Zipel Furniture Style Refrigerator was released in 2009. The design prioritized convenience and function. It featured a hidden handle, reducing the thickness and weight of the frame. It also added an easy-access “home bar” door which opened with just a slight push. The home bar made accessing frequently-used items quick and easy.

Improving Life Further with the 9000 Series

In 2013, Samsung began the launch of its premium 9000 series. Continuing to focus on improving the daily lives of users, this product line further expanded consumer experiences, upholding the brand’s unique design philosophy in home appliances. With each product in the 9000 series lineup, Samsung made a leap forward in producing products centered on thoughtful design. The concept behind this series was based on consistent and timeless style, futuristic material, technological innovation and most importantly, understanding its consumers. 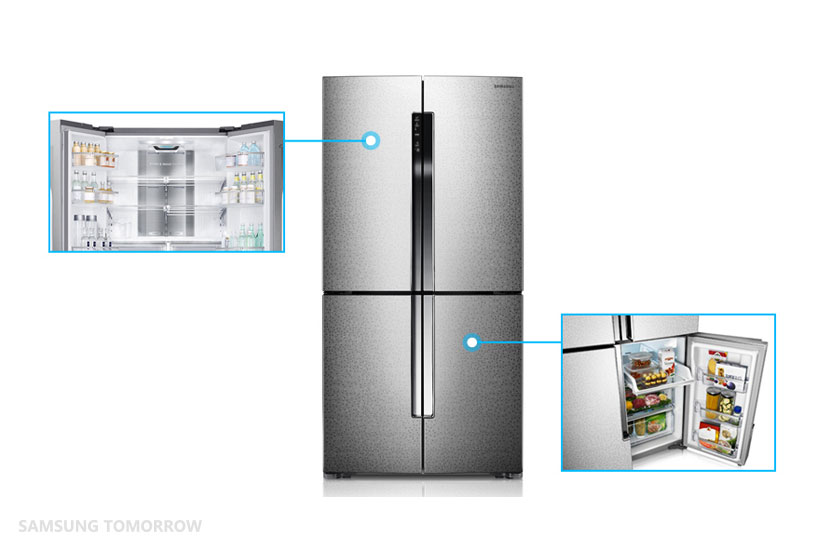 The T9000 was a particularly strong example of design innovation, daring to challenge the existing norms of refrigerator design. Using analysis of market research, Samsung learned that consumers use the refrigerator four times more often than the freezer. Samsung responded by thinking outside-the-box and changing the traditional two-door style refrigerator to a four-door style. Samsung also placed the two refrigerator doors on top for easy-access without bending, and placed the two freezer doors below. One of the lower freezer compartments was interchangeable from freezer to refrigerator. 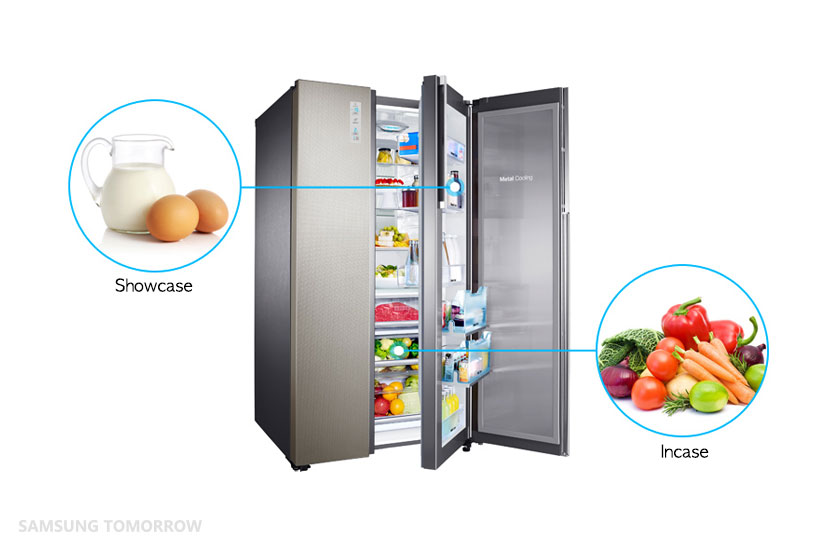 Since its release in 2013, favorable response has been steady, especially from young customers. 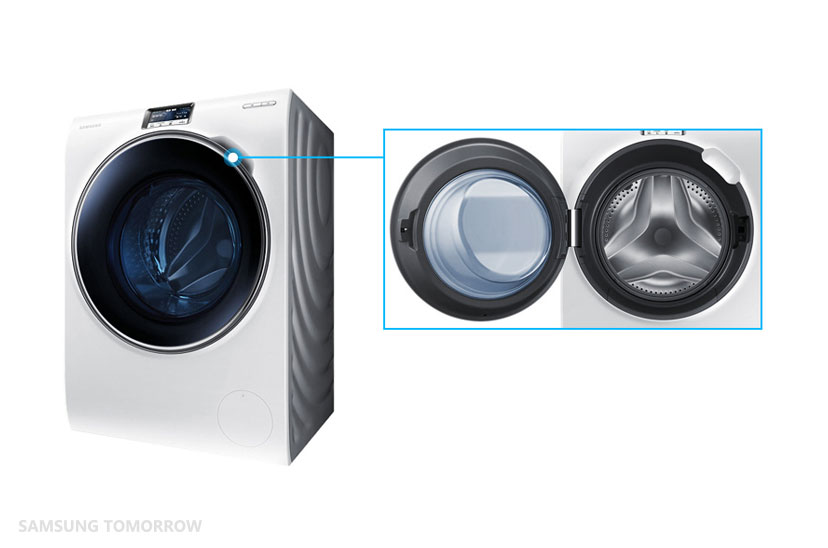 The following year, Samsung launched the WW9000 Crystal Blue Washer. Its design once again centered on the belief that a better understanding of the lives of its users brings more meaningful improvements to their daily lives. Visually simple and sophisticated, the door was positioned higher so users could load and unload laundry more conveniently. Considering ease of use for consumers, the door was also enlarged. A simple full color LCD touchscreen control panel replaced the numerous buttons and dials of previous models.

Creating an Identity, Not a Trend

Samsung Electronics Home Appliances is building a unique design identity, delivering true value to consumers by blending beautiful design with functionality that is focused on making life easier. This focus on thoughtful design continues to drive the brand today. 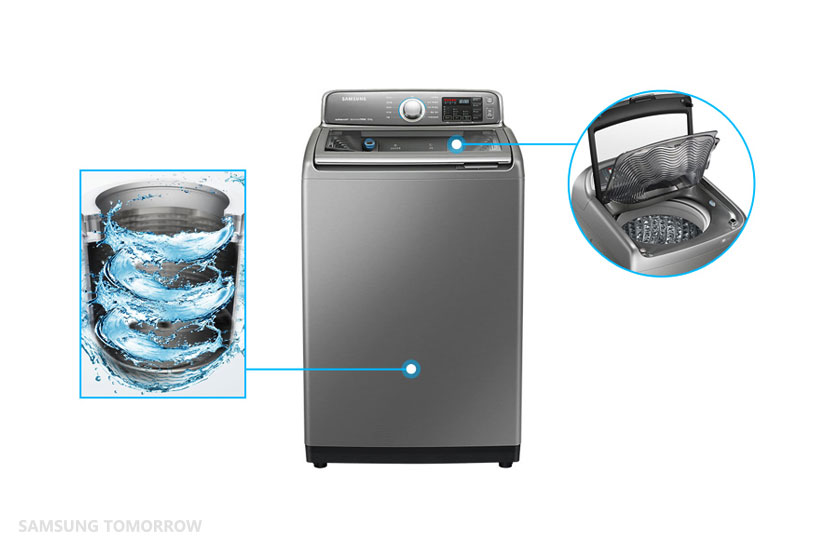 Solidifying this design identity, Samsung introduced the activewash™ washing machine this year. This innovative design concept took thoughtful design one step further. Samsung considered the entire laundry process, starting from even before the first machine wash cycle. Equipped with a built-in sink and Water Jet made specifically for pre-treating clothes, Samsung has reduced the time and effort spent on the total laundry process. activewash™ was ergonomically designed to make pre-treatment of delicates more convenient and comfortable. Samsung has eliminated the need to bend over tubs or basins, as well as the inconvenience of carrying heavy loads of wet clothes to the washer. activewash™ enables users to do everything in one place.

Thoughtful Design for the Future

To meet the needs of global consumers, it is not enough to rely solely on technology and brand power. Because modern consumers are well-informed, they demand products that enhance their lives in ways that are more meaningful to them. Successful design must consider both aesthetics and functionality.

The needs of consumers continue to evolve every day. Innovations in home appliances must continue to understand these changes and provide solutions to challenges. Through thoughtful design, Samsung is making life more convenient.

*Availability of these products and specific features may vary by region.