Ever since it was introduced at the MWC 2014, Samsung Gear Fit has become one of the most desired gadgets on the market, and we are happy to announce that it is finally available. Part of the interest in the Gear Fit is surely that it is the world’s first wearable device with a curved SUPER AMOLED display. This 1.84” Curved Super AMOLED touchscreen display provides instant notifications from Galaxy smartphones, such as incoming calls, emails, SMS, alarm, S-planner and 3rd party apps, which is a lot of information for such a slim size display.

In terms of realizing the most effective UX within the narrow and slim display of the Samsung Gear Fit, some of the most important things were the prioritizing information and making it easy for people to receive that information.

According to Kyuyong Kim, one of the senior UX solution engineers at Samsung, they were considering both horizontal and vertical display orientation. The team first decided that the horizontal display orientation would be more effective in providing users with information. Many people around the world are used to reading texts horizontally. Even the words used in this article are horizontal combinations of letters/characters. So it was only natural to enable the user to access information from the Gear Fit horizontally. However, people had an additional request.

Even though arranging all the necessary information vertically on the 1.84” Gear Fit display posed a big challenge for developers/designers at Samsung, the one major reason Samsung decided that Gear Fit should feature the vertical display orientation is VOC, or voice of customer. People voiced their desire for the vertical display and Samsung heard their voices. So, vertical display was back in the game for Gear Fit.

Samsung quickly found the way to vertically display information on the Gear Fit, but it wasn’t a slapdash job. Engineers and designers at Samsung carefully balanced the margin of the display – even down to a single pixel – before finalizing the vertical alternative.

With the vertical display orientation of the Gear Fit, the UX has come to mirror what people requested and expected. Not only does it support a more familiar display experience for fitness band users, but it also gives people the power to choose what works for them. 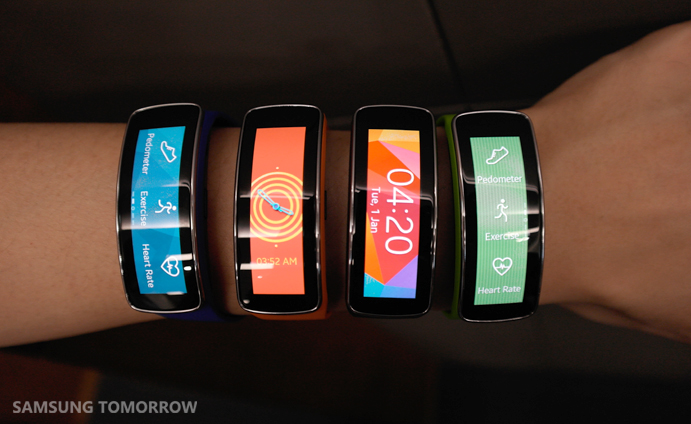 We had a chat with the actual engineers and designers behind Samsung Gear Fit. The story’s coming next week so stay tuned.

*All functionality, features, specifications, and other product information provided in this document including, but not limited to, the benefits, design, pricing, components, performance, availability, and capabilities of the product are subject to change without notice or obligation.